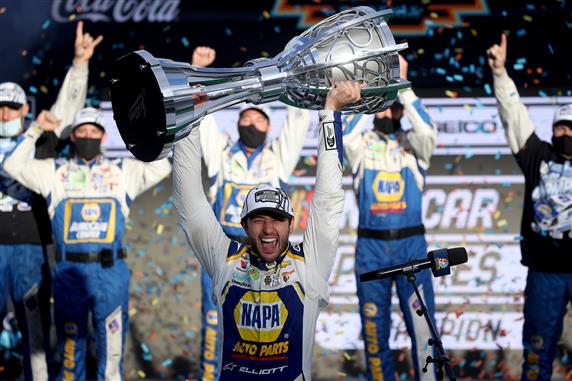 Elliott was awarded the pole for Sunday’s race but had to start in the rear of the field following multiple inspection failures.  Elliott quickly drove up through the field, and took the lead at the beginning of Stage 2.

Elliott led a race-high 154 laps in the winner-take-all finale for the Championship.  He took the lead away from Joey Logano with 43 laps remaining, and he was able to pull away for his fifth win of the season.

Elliott said he could see Logano struggling following the final pit stop and knew he needed to make his move.

“I saw Joey was pretty loose there; felt like I needed to get to him when I could,” Elliott said.  “Just waiting on the caution as always.”

Elliott, who won last weekend at Martinsville to lock himself into the Championship finale, said the season has shown how his team has grown.

“I just never would have thought that this year went the way it has,” Elliott said.  “I can’t say enough about our group.  I feel like we took some really big strides this year, and last week was a huge one.”

Elliott and his father Bill have now joined the Petty and Jarrett families as the only father-son duos to win the Cup Series Championship.  Elliott also became the youngest Champion since Jeff Gordon won it all in 1995, and becomes the first driver to win the Championship and Most Popular Driver in the same year since his father did it in 1988.

“All you can dream for is the opportunity, and I’ve been very fortunate to have that over the years,” Elliott said.  “This is a moment that I’ve dreamed about.  This is all I ever wanted to do…this moment is something not a lot of people get to enjoy.”

Logano finished third after fading late in the race, and he said his car’s handling went away over the final run after giving up the lead to Elliott.

“Just didn’t have the speed at the right time,” Logano said.  “Early in the race our Mustang was really fast.  We were close.”

The race was also the final one for drivers Clint Bowyer and Jimmie Johnson.

Johnson, the greatest driver of his generation, ended his career with seven Cup Series titles and 83 victories.

After his fifth-place finish, Johnson celebrated with his teammate Elliott in what many viewed as a passing of the torch.

Johnson said he was proud of the career he put together.

“My heart’s full, very thankful for today.  We had a great run on the track, and I can’t go without congratulating Chase Elliott and Hendrick Motorsports on another championship.”