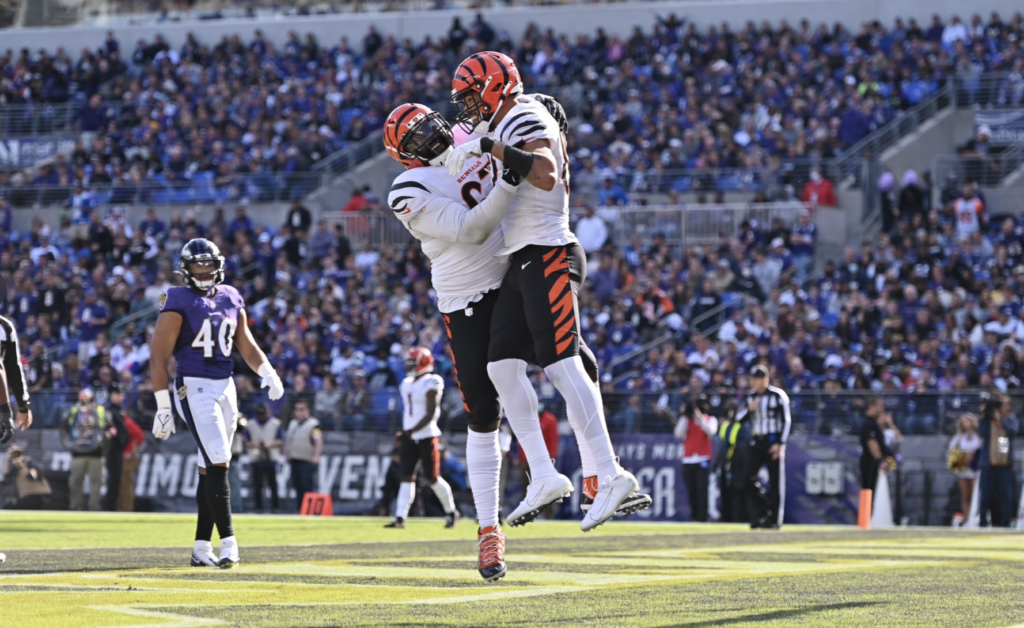 BALTIMORE — C.J. Uzomah caught a pair of touchdown passes and Ja’Marr Chase had a game-breaking 82-yard touchdown catch and run as the Bengals routed the Ravens, 41-17, Sunday at M&T Bank Stadium.

Joe Burrow completed 23-of-38 passes for a career-high 416 yards and three touchdowns and an interception while Chase finished with eight catches on ten targets for a Bengals rookie-record 201 yards before a stunned 70,659 in attendance.

“I think it was a big statement, 2-0 in the division for the first time that I can remember,” Burrow said. “You know the most exciting thing was the last two or the last three drives where you know, they knew, we were going to run the ball, and the O-line really took it to them. That was exciting to see. I know those guys were fired up about that, so that’s how you should finish the game – start out throwing the ball, get out on top, and then the O-line finishes it off.”

“I don’t know about momentum,” Uzomah said. “I think we need to get the train rolling. We are trying to establish who we are as a team and put the league on notice that this isn’t the Bengals of the past. This is the 2021 Bengals, and the past is the past.”

Chase is just the second player in NFL history with at least 50 receiving yards in each of his first seven career games.

“Congratulations to the Bengals,” Ravens coach John Harbaugh said. “They came into a division game on the road and played great, and [they] won and beat us. We were beaten soundly, and that’s what happened.”

Lamar Jackson was held in check, completing just 15-of-31 passes for 257 yards while rushing 12 times for 88 yards.

The statement win powers the Bengals to a 5-2 record and a tie atop the AFC North. The 5-2 mark is good for the No. 1 seed in the AFC after seven weeks.

The Bengals have now beaten the Steelers and Ravens on the road to open their division schedule. Cincinnati is now 3-1 on the road and finishes their three-game road trip with a game at MetLife Stadium

Following a critical sack of Lamar Jackson at the Bengals 41, the Ravens faced fourth-and-15 and decided to punt. On the third play of the ensuing Bengals possession, Burrow hit Chase on the outside. Four Ravens missed tackles and Chase emerged and raced 82 yards for the touchdown that made it 27-17 Bengals with 5:48 left in the third quarter.

He said he was going to break records.

The Ravens got a huge break when a scrambling Burrow made one of his few mistakes on the day, throwing to a double-covered Chase in the back corner of the end zone. The ball was picked off by Marlon Humphrey. The Bengals defense allowed a fourth-and-1 conversion on a Jackson 6-yard run. But the bigger play came when Alejandro Villanueva was called for holding, negating a 41-yard Jackson run.

The Ravens faced a fourth-and-7 from their 38. Jackson threw incomplete under pressure and the Bengals took over.

The Bengals broke on top when Evan McPherson converted a 52-yard field goal to cap a 22-yard drive. The key play was a Burrow to Chase conversion on fourth-and-1 at midfield. The 9-yard play put the ball at the Ravens 39. Burrow had another pass to Higgins to the Baltimore 34 before the Bengals settled for the three points.

The Bengals defense contained Lamar Jackson for most of the first half. Baltimore finally tied the game on a Justin Tucker 45-yard field goal early in the second quarter.

Joe Burrow hit another bomb for a touchdown. But this time the 55-yard post went not to Chase but C.J. Uzomah, as he had single coverage with Marlon Humphrey. The score put the Bengals up, 10-3.

But Lamar Jackson finally broke out. He had runs of 16 and seven yards and passes of 20 and 18 yards to set up the one-yard Devonta Freeman TD run and a 10-10 tie with under two minutes left in the first half.

But for the second straight week on the road, the Bengals answered before half. Ja’Marr Chase had a pair of exceptional plays on the drive, as per usual. Samaje Perine picked up an outside pressure and Burrow connected with him on the left sideline for 13 yards and a first down. After a timeout, Burrow hit Chase on a crosser for 26 yards and Chase outran the Ravens secondary for the sidelines to kill the clock with 16 seconds left.

Ja’Marr Chase is the 2nd player in NFL history with 50+ receiving yards in his first 7 career games. (via @statmuse)

McPherson converted the 30-yard field goal for the 13-10 halftime lead.

“I feel that, in the second half of games this year, we’ve had good rhythm throughout. Look, I wish we scored 28 points in the first half to really get rolling, but we didn’t,” Bengals coach Zac Taylor said. “But it’s a long game. Our guys, going into halftime, just had so much confidence. They’ve done it so many times that we feel we’re going to come right out, score and get that momentum. And part of it is that run game. We’ve got physical backs. They wear people down. Sometimes, you don’t always have the big, explosive plays.

“But, over time, we know what kind of an effect it has. In the past, we haven’t been able to use it because we really haven’t had a lead. But, now, you see that payoff where you get into that four-minute mode, and you get big chunks of yardage, and touchdowns come from that. Joe [Mixon] and Samaje [Perine] are big, physical backs, and they’re hard to bring down. They wear people out. So, it was good we were able to put ourselves in position, finally, to let that stuff pay off for us.”