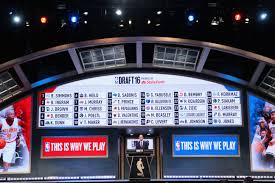 Keep it here for all the latest NBA Draft and trade news throughout the night as the NBA draft gets underway.

More to come at @TheAthleticNBA, but an update here on the Bucks-Kings Bogdan Bogdanovic situation. pic.twitter.com/mN2GOaLoKJ

The news was reported by the Atheltic’s Sam Amick. Apparently Bogdanovic never agreed to join the Bucks and that could derail the whole deal. On Monday, the Bucks agreed to trade for New Orleans Pelicans guard Jrue Holiday and to a sign-and-trade for Bogdanovic to strengthen their roster around two-time MVP Giannis Antetokounmpo. Milwaukee was set to send Donte DiVincenzo, Ersan Illyasova and D.J. Wilson to the Kings in exchange for Bogdanovic.

The Sixers are trading Al Horford and a first-round and second-round pick to the Thunder for Danny Green, sources tell ESPN.

The news first reported by ESPN’s Adrian Wojnarowski. The Sixers are also sending a lightly-protected 2025 first-round pick, the 34th overall pick in tonight’s draft and the rights to Serbian point guard Vasilije Micic according to Woj. The Thunder are also sending Terrance Ferguson to the Sixers with Green.

OKC now has 3 picks in the top 34 and a bunch of future first rounders (17 through 2026) should they want to move up in tonight’s draft, something the Celtics are also looking to do.

Wow. Shams bomb. Klay Thompson – who missed all of last season recovering from an ACL tear – hurt himself again. Waiting on tests to determine the severity.

Trevor Ariza has now been traded for the second time this week, and it may not be the last time.  The Pistons could be looking to use the 16th pick and Ariza to move up further in this years draft.

7:31pm – Bojan Bogdanovic turns down sign and trade to Bucks

8:11pm – Anthony Edwards selected as the first pick by the Timberwolves

Despite the T’wolves shopping the trade up until the last minute, they selected the freakishly athletic wing to team up with KAT and D’Lo.  Edwards is the most complete player out of college, and will look to make an immediate impact.

The Warriors played it safe and selected the best overall big man in the draft.  With Klay Thompson hurt, the Warriots were not in a position to risk giving up the pick.  Wiseman is the best big man and one of the top prospects in this draft.

8:22 – LaMelo Ball selected with the third pick by the Hornets

The controversial guard will join a crowded backcourt in Charlotte.  With very few assets, the Hornets were in a good position to go all in on the highest risk highest reward player in this draft.  The Hornets are hoping that his unique playmaking ability and skill will overshadow his off court issues.

Instead of packaging the pick, the Celtics have selected the sharpshooting wing out of Vanderbilt.  The Celtics have had a good history in drafting versatile wings.

9:40 – Ricky Rubio traded back to Minnesota in exchange of picks

Ricky Rubio will return to where it all started, as the T’wolves find a point guard to anchor their offense.  The Thunder continue to acquire draft picks and offload contracts as they look to rebuild for the future.

9:46 – Kennard headed to LA and Shamet to Brooklyn in mid draft deal

The Clippers upgrade thier bench with the addition of Kennard as the Nets add a consistent shooter.  The Pistons continue to accumulate draft picks in this draft, to build for the future.

The Sixers add desperately needed shooting to their starting lineup through this trade with the Mavericks. Richardson will help cover Luka on the defensive end for the Mavs.  The Sixers have managed to add to sharpshooters on draft night.