The 26-year old First-Team All-Pro wants out of San Francisco. 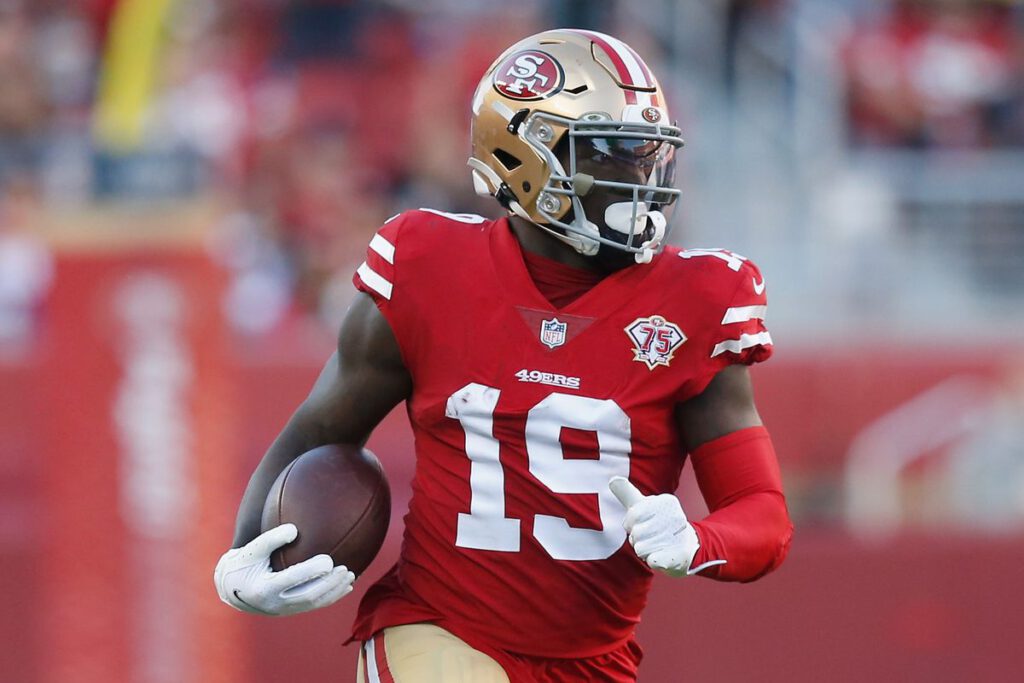 Call me crazy, but sometimes the NFL offseason is more exciting than the actual season. Once players are out of the zone and not getting their weekly game checks, both them and their agents seem to become unhinged, unhappy, and ask for exuberant amounts of money.

This exact thing happened today when star wide receiver Deebo Samuel officially asked out of San Francisco. ESPN’s Jeff Darlington was the first to report the news this afternoon after talking with Samuel directly:

Breaking News: I just spoke to wide receiver Deebo Samuel — and he told me that he has asked the 49ers to trade him.

He did not want to discuss specific reasons behind his request, but he has indeed let the 49ers know his desire to leave the organization. More to come.

Samuel had a career year for the 49ers in 2021, hauling in 77 catches for 1,405 yards and six touchdowns while also rushing for 365 yards and eight touchdowns. He made his first Pro Bowl and was named a First-Team All-Pro.

After excelling in the Kyle Shanahan system – he now wants out, and frankly it’s hard to imagine he’ll be playing in the Bay Area again next season. Luckily BetOnline is already on top of it. Here are their odds on where Deebo Samuel will play in 2022:

The Colts are currently leading the pack at +450 odds. Indy has a very “meh” wide receiving corps as they sit right now, but adding a player like Samuel would add quite the wrinkle to a team that always seems to be one piece away. They finally have a competent quarterback under center in Matt Ryan, and a play caller as good as Frank Reich should be able to use Deebo in such a way that will get the most out of them. Indy also has ample cap space, which would allow them to take on the playmaker long-term.

Another option that I like here is the Jets at +900. Joe Douglas takes plenty of swings as a general manager, which explains why he’s been their longest tenured GM since Mike Tannenbaum. New York took a shot at Tyreek Hill when he wanted out of Kansas City, so I wouldn’t be shocked if they did the same here with Samuel. Another note is that Jets Offensive Coordinator Mike LeFleur was on the 49ers coaching staff for several years before making the trip out east with Robert Saleh. There could be a relationship there.

Could the Patriots hop in the mix as well? It isn’t very likely according to the odds at BetOnline. They have just a 16/1 (+1600) chance to land Samuel. CLNS Media’s Evan Lazar said today that, “I don’t see Bill Belichick parting with – not only the draft capital to trade for a player like Deebo Samuel – but also giving him $25+ million a year with over $70 million guaranteed like Tyreek Hill got from the Miami Dolphins.”

I couldn’t agree with Evan more here, but man could you imagine Deebo in this offense? They desperately need a playmaker for Mac Jones – and who better than the duel threat offensive weapon who can make plays all over the field.

Ultimately, I think Samuel ends up with the Jets (+500), Packers (+600), or Falcons (+1200) – three teams that are willing and capable of making a splash. I’d be shocked if it didn’t happen before next Thursday’s draft.