Combine Risers From a Patriots Perspective 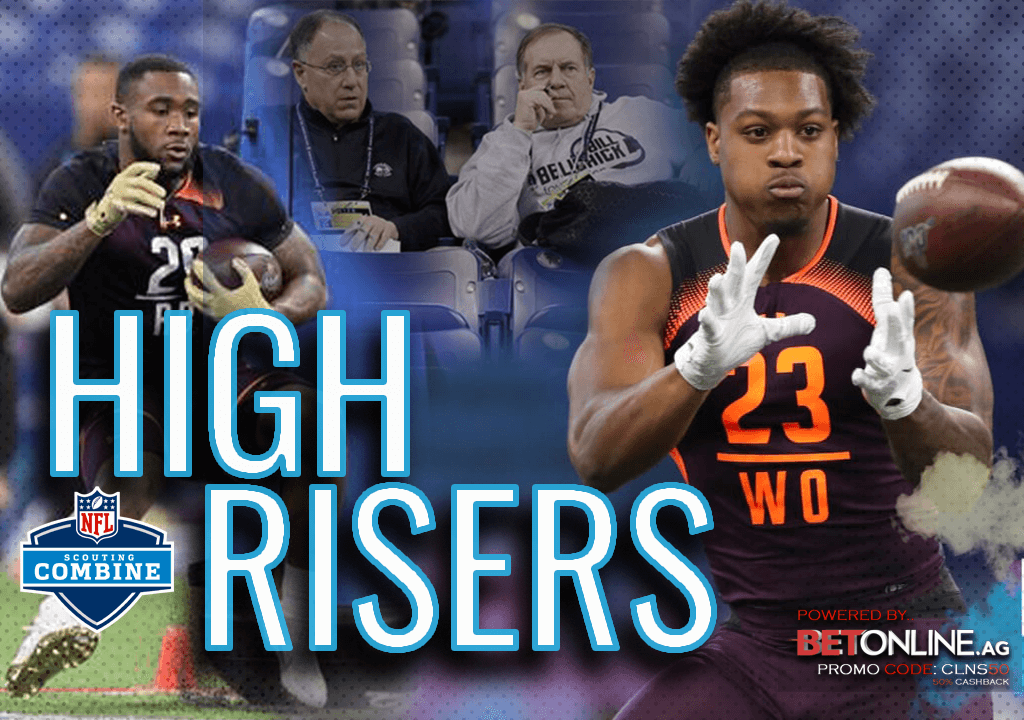 INDIANAPOLIS — After a week in Indianapolis, here are a handful of prospects that stood out from a Patriots perspective:

#ArizonaState WR N'Keal Harry is a unique player. He's built like a downfield threat as a jump ball guy but he might be the best YAC receiver in the class. He's impossible to bring down because of his frame/strength and his moves and vision in the open field are superb. pic.twitter.com/0TIs8gYPj4

Speaking to scouts at the combine, Harry was the most polarizing receiver in this class.

Some scouts had him as the top receiver in the draft ahead of Ole Miss superhero D.K. Metcalf, and others had him in the 5-10 range, which is where he was for me before the combine.

My two biggest concerns with Harry were his speed and route running.

Harry admitted himself that his route tree was limited at ASU (fades, screens, comebacks), but he was extremely productive at the collegiate level ranking in the 88th percentile in college dominator (percentage of teams yards and touchdowns), making him a darling of the analytics crowd.

Harry answered the speed concerns with a 4.53-second 40-yard dash putting himself in the 89th percentile for speed score, which adjusts 40 times for height and weight. Unfortunately, Harry didn’t participate in the agility drills, but based on his 40 and jumps he’s an explosive player both testing wise and on tape.

Bill Belichick has never drafted a wide receiver in the first round, but Harry’s explosiveness, versatility and ability to pick up yards after the catch are attractive qualities.

Let’s get this out of the way now: no, he’s not the son of that Stanley Morgan.

The Nebraska product was on my radar before the combine for the Pats, and then he ran a 6.78 in the three-cone (76th percentile) and finished in the 74th percentile in SPARQ score.

#Nebraska WR Stanley Morgan Jr: not a burner but has some traits that you can mold into an NFL receiver. Uses stride length and some savviness to separate deep. Look back/head fake allows him to stack here. Good at high-pointing the ball too. pic.twitter.com/A9Vtd7JIhY

Morgan is a terrific route runner. He has multiple gears that he uses to sneak up on defensive backs before running past them and uses a series of fakes at the top of his routes to create separation. Morgan doesn’t have great long speed, but his agility scores back up what we saw on tape with his moves at the top of the route.

If the Patriots want to land a complementary receiver on day three, Morgan’s testing numbers and tape fit their mold.

For over a year now, scouts continue to say that Sanders tries to hard to be like former teammate Saquon Barkley.

#PennState RB Miles Sanders is basically Saquon really lite. He's no where near as explosive as Saquon. Doesn't have the breakaway speed and acceleration. But his running style is similar. Twitchy runner with a low center of gravity. pic.twitter.com/iqqn9fkUt3

When you watch them, they do have similar styles, as both have jacked up lower bodies and run with a low center of gravity. Sanders doesn’t have Barkley’s home run speed, but he’s incredibly shifty and makes defenders miss in tight spaces with jump cuts.

Sanders is a potential Patriots fit for two reasons: he met with the team at the combine and had a strong workout finishing in the 74th percentile in the three-cone (6.89 seconds).

The Patriots don’t have a huge need at the running back position, but they could use a fourth ball carrier on the depth chart and Sanders is an option early on day three.

If the Patriots shock us all and go offensive line early, Risner seems like a legitimate possibility.

Just a casual 3 play sequence from K-State RT Dalton Risner v OK State that shows off his ability to dominate as a drive blocker, seal pursuit on the 2nd level and pass block. pic.twitter.com/d9OyMmcRXa

Risner is a Patriots-type player; he was a multi-year starter, plays hard on every single snap and has above-average technique for a college offensive lineman.

Plus, Risner models his game after former Patriots left tackle Nate Solder, and was one of the most impressive interviewers we spoke with at the combine this week.

Risner remembered the names and titles of every single coach he met with, which isn’t normal and is an extremely bright and focused individual.

For many reasons, Risner is a safe pick and could be the right tackle of the future for the Pats.

Aside from the Boston ties, it’s hard to ignore the fit with Boston College’s Chris Lindstrom.

First, Lindstrom comes from a football family and lives and breathes the game. Check.

Second, he tested and showed on tape that he’s one of the most athletic interior offensive linemen in this class. Check again.

The Patriots love athletic offensive linemen, especially on the interior, as their scheme asks those guys to make blocks on the move and in space consistently. Lindstrom can do all of that and brings tackle-like feet to the interior for pass protection duties.

Put me down for all the shares in Renell Wren stock after this weekend.

After his elite workout, I turned on Wren’s tape from last season and the phrase “bull in China shop” doesn’t do it justice.

So #NFLCombine standout Renell Wren's explosiveness and power show up on tape. Plays like these where he's running over offensive linemen happen often. pic.twitter.com/3jy7Cm1qfq

Wren doesn’t have great production (one sack, 4.5 TFLs last season), but he’s disruptive on every snap thanks to a combination of first step quickness and upper body strength. On tape, you seem him tossing offensive linemen to the ground like ragdolls, and he was nearly impossible to block one-on-one on the interior. Combine that lightning-quick get off and strength with a 6-5, 320-pound frame and you have the makings of a better pro than collegiate player in the right hands.

Wren needs to refine his technique, he plays too high and doesn’t know how to use his hands, but he’s oozing with potential making him the perfect mid-round selection.

Out of a stacked group of defensive linemen, Hill stood out during the on-field drills due to his tremendous body control and hip fluidity.

The UCF defensive tackle backed that up by scoring in the 95th percentile in “burst” score and the 67th percentile for agility with a 4.38-second short shuttle.

Some impressive short area quickness and flexibility from #UCF DT Trysten Hill who killed the #NFLCombine today. See that first step quickness to angle himself in the backfield and then he can bend and move his feet around the blocker to get the ball carrier. pic.twitter.com/jykTnzJI6H

On tape, that explosiveness and rare movement skills for a man of his size was apparent as he consistently shot into the backfield with first step quickness that was too much for opposing offensive linemen, and had the bend and foot speed to contort his body and chase down ball carriers to make tackles on the move.

Hill fell out of favor with the new coaching staff at Central Florida but was considered among teammates as one of the best players on the team.

He’s a perfect sub package rusher on the interior that will give you 20 or so high-motor plays per game.

He’s an elite athlete, but his tape was underwhelming, and he doesn’t know how to convert that athleticism into production on the field yet making him the ideal mid-round project.

During his media availability, Banogu gave me some interesting answers, saying that he was only asked to set the edge and drop into coverage at TCU but that they played in multiple systems and both odd and even fronts. He also mentioned that he’s just scratching the surface as a pass rusher and doesn’t have a plan yet (go-to move, counter move) which is something he’ll work on at the next level.

Banogu is already an athletic and versatile edge or stand up outside linebacker, and in the right hands, has a high ceiling as a pass rusher.

Since 2010, the Patriots have drafted seven cornerbacks that ran a sub-6.75 three-cone at the NFL Combine.

On Monday, Michigan cornerback David Long posted the best three-cone time among defensive backs (6.45 seconds) and is also one of the best press-man corners in the draft.

The Michigan cornerback will rise up draft boards after an impressive workout, but he should be on every Patriots fans radar with that three-cone time and playing style.