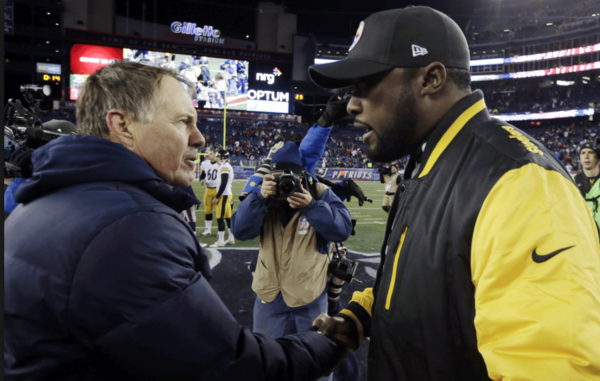 There can be little debate that Bill Belichick and Mike Tomlin approach their jobs in vastly different styles.

One coach coach takes great pains to pay respect to each and every player on the opposing roster each and every week. One coach conducts a national television interview before a Sunday primetime game to talk about how his team’s entire season is focused on a singular opponent.

Now Tomlin gets his wish. His 11-2 Steelers square off against the 10-3 Patriots at Heinz Field Sunday, with the winner likely walking off the turf with the No. 1 seed in the upcoming AFC playoffs.

Tomlin’s remarks to Tony Dungy have been well documented. But for the purpose of a refresher:

The Patriots beat the Steelers, 27-16, in Pittsburgh in Week 7 of the 2016 season without the injured Ben Roethlisberger. Landry Jones kept it close early but really, he never had a shot. Then the Steelers had to beat the Dolphins and Chiefs in the playoffs to get a rematch with the Patriots in the AFC Championship. But it was in Foxboro. Following a 36-17 romp, the Patriots were on their way to the Super Bowl and the Steelers were left wondering why Tom Brady seems to always carve up the Steelers D.

All the talk was about the Steelers considering doing away with their zone defense against the Patriots this season.

What has Belichick seen?

“Yeah, basically (they’re the same),” Belichick noted, before adding that without the injured Ryan Shazier at linebacker, the Steelers have adjusted things. “They’ve had to replace him. They’ve played more dime defense with him out. They’re primarily a nickel team going back to last year when it was [Lawrence] Timmons and Shazier. A lot of nickel this year. They’ve played a little more dime this year and in the last couple of weeks in third down situations; not on early downs. I’d say that would be the biggest change. That’s not really a change, but that has shown up.”

On Wednesday, Tomlin spoke to Patriots reporters on a conference call about the remarks that had everyone in New England abuzz.

“I don’t know that any of us were looking ahead to be quite honest with you,” Tomlin said. “That’s the way it was described by you guys (media). We were simply answering questions. We were doing our professional due diligence. When we do interviews and people ask us about potential big games down the road, we’re going to politely answer questions and do so honestly. That’s not us looking down the road. That’s us simply performing our professional duties.”

Compare that to Belichick’s answer about getting his team up for big games.

Truth is, that quote could’ve easily been from 2004 or 2007 as much as Wednesday. Belichick’s public demeanor and approach hasn’t changed and it certainly not going to change now.

Give Tomlin credit. He doesn’t duck the big story, nor does he shy from controversy. He embraces the challenge and this week is a psychological Mt. Everest for Tomlin’s Steelers. They were crushed last year in the AFC championship and never had a prayer, especially when Le’Veon Bell went down with a groin injury. This year, they’re on a roll. They’re heading into Sunday’s game on an eight-game winning streak after the infamous “maybe I don’t have it anymore” line from Ben Roethlisberger after an embarrassing home loss to the Jaguars that doesn’t look so bad now.

But make no mistake about it: The Steelers season has essentially been leading up to Sunday. And Tomlin admitted as much Wednesday.

“We all talk goals at the [onset] of these seasons and we understand what those goals are and there’s obvious things that occur along the way if you’re moving in the right direction in terms of some of those goals,” Tomlin said. “If you set out on the season to be world champs then obviously you’re going to play in significant games along the way. The road gets increasingly narrow. That’s part of being on the pursuit of world championship play. So it’s ridiculous to goal set and not to acknowledge natural things that occur along the way if you’re committed to the pursuit of your goals.”

“They’re an elite group. They need no endorsement from me there. They’re in the thick of things as usual,” Tomlin added. “It starts obviously with their leadership – Coach [Bill] Belichick, Tom Brady. They’ve got great continuity from the top down. I think it shows that they’ve got a winning approach. It’s going to be a good football game.”

And now Rob Gronkowski is coming back into the picture on Sunday, after the Patriots clearly missed him Monday, going 0-for-11 on third down. Tom Brady didn’t look like the same quarterback. Now, he’s got the big target back and that makes things that much more difficult for Tomlin’s defense.

Belichick’s answer to having Gronk back?

“It’s good to have all of the players that we have,” he said.

The rivalry does exist and it does mean something to Tomlin, who is 2-6 lifetime against Belichick and 1-6 against Brady.

“It’s an awesome thing to be a part of,” Tomlin said enthusiastically. “(It’s) not something that I or we take for granted. To be in significant games is just part of chasing what it is that we’re chasing and to have a routine dance partner that just speaks to their commitment and achievements in similar ways. We’re excited to be a part of it. We don’t take it for granted. We realize that these type games are just part of what we desire to be.”

Let’s just hope Sunday is, indeed, part 1 or a 2-part must-see mini-series and that it leaves us wanting a sequel in January.