Corey Coleman Worth Rolling the Dice On For Patriots 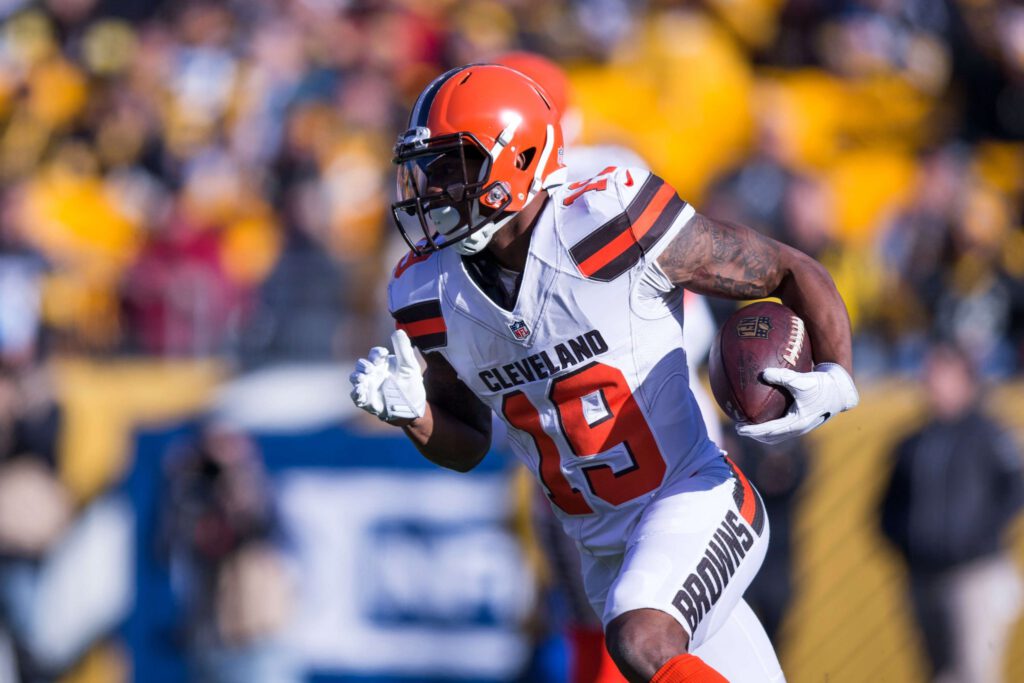 The Patriots’ shuffling at the wide receiver position continued on Tuesday when the team signed 2016 first-round pick Corey Coleman to a one-year deal.

To say it has been a revolving door at the back end of the wide receiver depth chart in New England would be an understatement.

The question now is can Coleman, a failed first rounder in Cleveland, find his footing in the NFL with Tom Brady and the Patriots?

As we know, it’s challenging to play wide receiver in the Patriots’ system, and it often takes new receivers at least an entire season to learn the complex the playbook, which involves a plethora of option routes and timing routes. It’s important to manage any expectations for Coleman as we move forward.

However, although there are concerns about his work ethic and physical shortcomings such as size and play strength, Coleman’s talent as a receiver is undeniable.

At Baylor, and at times with the Browns, Coleman flashed the physical makeup of a legit NFL deep threat. He’s a burner on the outside that demands special attention for his incredible speed and acceleration.

With that said, let’s take a look at Coleman’s film with the Browns to explore how he fits in with the Patriots, and why he has failed in the NFL so far:

As stated above, Coleman is more than capable of taking the top off a defense, and he has shown that ability at the NFL level.

In Cleveland, Coleman made teams pay when they didn’t provide safety help to corners trying to track the speedster.

One thing that’s apparent on any tape of Coleman’s that you watch is that defenders that try to jam him at the line of scrimmage and miss get torched for long gains.

Here, the corner is going to try to jam Coleman on what appears to be an inside release by the former Browns wideout. Coleman has quick feet and can make defenders look foolish by making them whiff on their jam as a result. Coleman does exactly that on this play and beats the defender easily down the sideline for a huge gain.

In Coleman’s second career NFL game, he torched the Ravens defense for 104 yards and two touchdowns, and it appeared as if the Browns had found themselves a star. It didn’t work out that way, but Coleman flashed his talents on the NFL stage nonetheless.

Along with a knack for beating jams at the line of scrimmage, Coleman also can eat up the defenders’ cushion in off-coverage at an incredible rate.

On this play, the Ravens play a cover-3 scheme with the boundary corner on Coleman’s side of the field playing bail technique, typically a method used to stay over the top of fast receivers. Coleman’s acceleration off the line of scrimmage is so fast that even with this technique he shrinks the space between him and the defender so quickly that he’s by the cornerback before the Ravens defender in seconds. Then, Coleman shows off another skill of his that was all over his college tape: the ability to work back to the football and win 50/50 balls in the air. The pass is slightly underthrown, and Coleman can track the ball in the air and make an acrobatic contested catch over the defender.

Here’s another example of how Coleman gets on defensive backs at an extremely impressive pace. The cornerback is playing well off the line of scrimmage to give himself a cushion against Coleman, but the former Browns wideout eliminates that cushion almost immediately and then throws an excellent shoulder/head fake at the top of the route before breaking it off towards the corner of the end zone. At that speed, even the slightest of nuance to sell the corner route will turn defenders around as we see on this play.

My biggest concern with Coleman’s game as it pertains to the Patriots offense is his lack of physicality at the top of his routes.

Coleman doesn’t always like to work through contact or attack the football in the short and intermediate area of the field. He also dropped eight passes on 73 targets in Cleveland (11% drop rate), and drops were a concern among draftniks before the 2016 draft.

This play sums up these concerns perfectly. Coleman runs a curl route along the sideline. He does an okay job of running through the contact at the top of the route, but he waits on the football instead of attacking it and allows the ball to come into his body, resulting in a drop. You can tell that the physicality from the corner throughout the route, including the tackle when the ball arrives, prevents Coleman from making this catch. This isn’t uncommon for burners on the outside, but the finesse approach is never a good way to earn targets from Tom Brady.

Whenever the Patriots acquire a new receiver physical talent isn’t necessarily the most important element of his success or failure in New England.

At this stage of the season, Coleman has as much physical skill as any receiver available on the open market, unless the team gave up steep draft capital to trade for a veteran wideout.

In the NFL, Coleman’s long speed and acceleration off the line of scrimmage did pay dividends for the Browns during his time in Cleveland.

And one has to wonder what could have been if Coleman didn’t break his hand during his rookie season.

After his breakout game against the Ravens, Coleman broke his hand and missed nearly two months. He wasn’t the same receiver after that.

On top of learning the playbook, Coleman will also have to prove that his attitude concerns are a thing of the past.

We saw Coleman on HBO’s Hard Knocks go into Browns head coach Hue Jackson’s office and ask why he wasn’t starting, even though it was clear from practice footage that he hadn’t earned the starting job.

Overall, there are a lot of obstacles for Coleman to overcome to contribute in New England this season; he needs to reestablish is work ethic, learn the playbook and build chemistry with Tom Brady.

However, if the Patriots limit his route tree to vertical passing concepts, using him as a field stretcher to take coverage away from their primary pass catchers, Coleman can provide NFL caliber talent to the Pats offense, something they weren’t going to get from the Chad Hansen’s and Riley McCarron’s of the world.