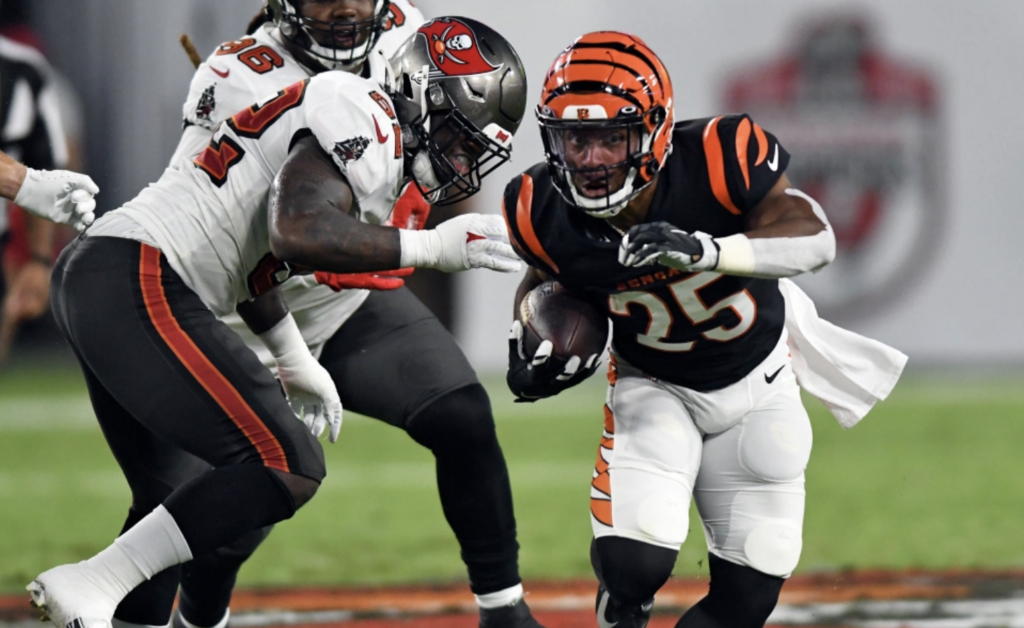 CINCINNATI — In an offense that already features a No.1 overall drafted quarterback, three projected star receivers, a Pro Bowl caliber feature back and an underrated tight end, Chris Evans could be the ultimate X-factor in the offensive plans of the Bengals in 2021.

At Michigan, Evans was considered a talented running back after putting up impressive numbers in his freshman and sophomore seasons. But things started to change in his junior season of 2018. He lost snaps and playing time to others as competition grew more intense. Then he was slowed by an injury.

As a fifth-year senior in 2020, he started just once and ran just 16 times for 73 yards and a touchdown. But he showed real promise in the passing game, where he caught nine passes for 87 yards.

His career needed a jump start. He got it at the 2020 Senior Bowl in Mobile, Ala. The Bengals watched him and saw enough to make him a sixth-round pick in April.

“Coach (Zac Taylor) said during the senior bowl he watched me running routes,” Evans said Thursday. “It’s pretty much the same routes I’ve been running here, honestly, a couple new ones. I don’t think I’d say surprised. They got the tape and more.”

“He had limited production at Michigan but his Senior Bowl production was really good,” said Bengals offensive coordinator Brian Callahan. “You saw all the things you want to see from a back. He’s big enough to carry the ball. He has really good hands and is a natural route-runner.

“He kept beating people one on one (in practice). That was a determining factor for him. He’s extremely intelligent, so he’s one of those guys that can excel at picking up pass protection schemes. I’m really excited about him.”

His approach during the Senior Bowl week was just to make the right impression so he could get a chance. The Bengals have given him that chance to show he’s capable of serving the vital role that Gio Bernard served in Cincinnati.

In camp and the preseason, Evans continued to make plays with the second and third teams. It was evident that the Bengals feel they found something in the back who didn’t get a chance to really show off his skills in his final two years in Ann Arbor.

It wasn’t the 68 yards on 24 carries and one touchdown that stood out. It was the five catches for 62 yards and the 29-yard touchdown reception on the slot go route against Miami that turned heads, including those on the Bengals staff. It’s the kind of play that Evans was already very confident he could make at the NFL level.

“Yeah. If it comes down to it and coach needs to do that I got full confidence in myself and I’m ready to roll,” Evans said.

“I played quarterback all the way up to my freshman year and then they switched me to slot (receiver),” Evans said of his days in high school. “As I got to my junior, senior year, they put me in the backfield and run routes. I just thought it was easier going against a linebacker rather than going against a corner or safety.”

The rookie can ball (@Kidnplay_abc123)

“I just found that niche,” Evans continued. “As soon as I got to Michigan, they put weight on me. I had already the fundamentals of receiver, so I just took whatever opportunity came and made the most of it.”

Evans has never played with Gio Bernard but he knows full well from watching his film that when he’s not lined up in the slot, his time on the field with the Bengals will go as far as his ability to pass protect from the running back position.

Chris Evans says he’s watched Gio Bernard on tape from his days with #Bengals to learn what he’ll need to do in pass protection pic.twitter.com/daLPUtS1qN

“Definitely. After the first preseason game, I was talking to coach (Hill) and he was just letting me know how crucial pass protection is going to be and watched all the Gio (Bernard) clips from last year and taking little things from him as far as pass protect, where to fit, get inside and where to check your eyes and stuff like that so I can be ready for the game,” Evans said.

As Evans learned right away in the Tampa game, there’s a lot more to blitz pickup in the NFL than even the Big 10.

“At this level, I would say the blitzes are so crazy, so crazy. Coach Hill made some cutups (videos) to where I have to (watch) them five times to even see what they’re doing and how I would even process all that within the quick second,” Evans said. “It’s third down, the crowd’s loud and you might not hear the call and you’ve got guys walking around. It’s just crazy.”

All the while, the main back in the Bengals backfield has been helping him along, as Joe Mixon realizes the more others can do, the more productive he can be.

“He’s helping me through the process a lot,” Evans said. “Making plays and having a different mindset that you’re on the attack. Attack practice, attack anything.”

Evans is not worried any more about the classroom demands or playing time at Michigan. Now that he’s earned a spot in what could be a dynamic Bengals offense, he’s ready to show their faith in his potential will be rewarded.

“Yeah, for sure,” Evans told me this week. “I think now that being away from college and school and all that stuff, you don’t have to think about nothing else but football, so everything is lined up and it gives you more time to be able to focus because it’s your job now.”