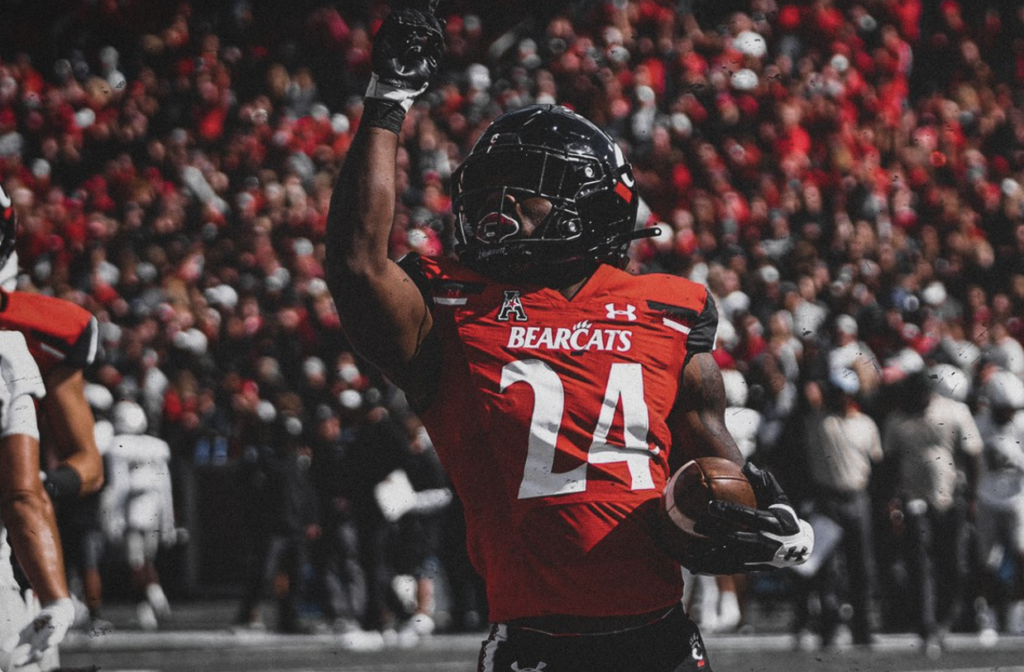 CINCINNATI — Jerome Ford ran for four touchdowns, including a game-breaking 79-yard score, and Coby Bryant recorded his first career pick-6 as the third-ranked Bearcats cruised to their sixth straight win, 56-21, over Central Florida before another capacity crowd at Nippert Stadium Saturday afternoon.

Ford finished with 189 yards on 20 carries while Desmond Ridder was held to 13-of-23 passing for 140 yards and a touchdown pass to Alec Pierce.

The game was the highlight of a big day on UC’s campus as ESPN’s College Gameday originated its broadcast from the Clifton Campus with McMicken Hall as the backdrop.

UC showed its superiority early as they won the coin toss and deferred to UCF, allowing them to possess the ball first. The Bearcats proceeded to show their dominance in all three phases.

The Bearcats held the Knights to a three-and-out, highlighted by a solid tackle by outside linebacker Deshawn Pace on quarterback Mikey Keene in open space, as Keene tried to scramble for the first down.

Desmond Ridder says these third-ranked Bearcats can still grow a lot and improve after back to back 50-point games. pic.twitter.com/T663aGLdsD

That defensive stop was followed by partially blocked punt by UC’s Josh Whyle that put UC in business at UCF’s 38.

Then Ridder took over, engineering an eight-play drive that was capped by Ford’s first touchdown run of the day from one yard out. That was set up by Ridder’s rush to the one on a third-and-3 from the UCF 7.

The Bearcats permitted a first down on UCF’s next possession but that was it. UC took over its second drive on its own 34. Facing a second-and-25, Ridder threaded a pass to Leonard Taylor on the near sideline for 16 yards. Ridder’s pass on third-and-9 went for 12 yards to Michael Young and a first down. Four plays later, Ford went up the middle from two yards out for a 14-0 UC lead.

UC couldn’t score on their third drive but Mason Fletcher’s punt went for 36 yards and was downed by the coverage team at the UCF 2.

The Bearcats made it 21-0 on an acrobatic catch by Alec Pierce in the back left corner of the end zone midway through the second quarter. With the Bearcats on the UCF 19, Ridder threw a fade and Pierce leaped and caught the ball over the defender, coming down with it in bounds for the score.

On UC’s next possession, following a punt that put UC back on its 21, their worst field position of the day, Ford took the handoff and went off left tackle. He beat the corner to the left sideline and outraced coverage for a 79-yard TD, eclipsing his 75-yard run to open the second half against Murray State.

.@Rome813_ gets the hat-trick in the first half with an 79-yard touchdown run. #AmericanPow6r
📺ABC pic.twitter.com/kcPa4QHFYC

Ford’s fourth and final touchdown of the first half was a four-yard score, untouched off the right side, four plays after Pace’s interception that put UC in business at the UCF 34. Ford finished the first half with 16 carries, 176 yards and four touchdowns for an average of 11 yards per carry.

UC had only two defensive lapses. Ryan O’Keefe split a gap on the right side of the defense with under three minutes to go that resulted in a 51-yard sprint to the UC 24, with only Ahmad “Sauce” Gardner saving the score.

The Bearcats appeared ready to hold the Knights to a field goal but Keene found Brandon Johnson in the far left corner of the end zone for a 16-yard score with 33 seconds left that resulted in the first touchdown against the UC defense since the fourth quarter of the game in South Bend on Oct. 2.

The Bearcats committed a few miscues in the third quarter, namely a fumble from Charles McClelland at the UCF 29. The Knights were driving toward the red zone when Coby Bryant stepped in front of Nate Craig-Myers and raced 74 yards for his second interception in as many weeks, putting the Bearcats up, 42-7.

.@CBryant2_ gets his second pick-six in as many weeks. #AmericanPow6r pic.twitter.com/LXpCL3noHu

The Bearcats added offensive touchdowns from Ethan Wright and Evan Prater in the fourth quarter, with Wright’s following a UCF muff of Mason Fletcher’s 52-yard punt that put the Bearcats at UCF’s 8.