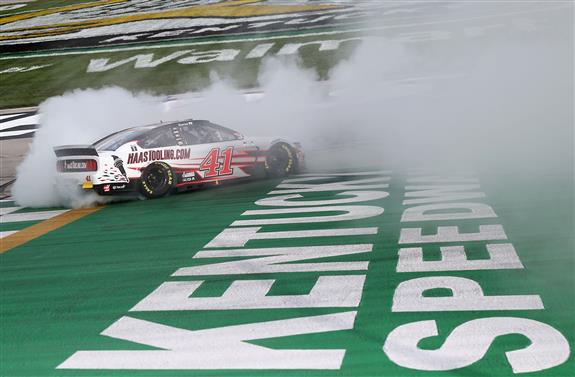 Cole Custer won the Quaker State 400 from Kentucky Speedway on Sunday afternoon to pick up his first career victory.

Custer became the first rookie to win at Kentucky since the Cup Series began racing there in 2011.

Custer, who has struggled adapting to the competition of the Cup Series so far this season, said he was not expecting to get the victory at a track where drivers consistently struggle to pass.

“We were so good all day,” Custer said.  “Our car was so good; obviously it wasn’t the easiest track to pass on so we were kind of stuck back there.  I didn’t think we were coming here coming to win.”

After two wild restarts late in the race, Custer took the leaders four-wide coming to the white flag to take the lead.  While Ryan Blaney, Martin Truex Jr. and Kevin Harvick battled on the inside, Matt DiBenedetto gave Custer a push that sent the rookie to victory lane.

With the victory, Custer became the first rookie to win in the Cup Series since Chris Buescher went to victory lane in 2016 at Pocono.

Custer said he and his team have been focused on getting acclimated to the Cup Series competition.

“It definitely wasn’t the start to the year that I wanted,” Custer said.  “We were definitely off at some places, but this was…an unbelievable car.  We put it all together and I just can’t thank everybody enough.”

Martin Truex Jr. finished second on Sunday after starting at the back of the field for failing pre-race inspection twice.

Truex found himself on the losing end of two calls by NASCAR late in the race, when the cautions came out while he was side-by-side with the leader.

Truex said he had to shift his focus after losing out on those two calls with the laps winding down.

“At the end there, just a bit unlucky,” Truex said.  “That’s just kind of how these things go sometimes.”

“Just an unbelievable racecar.  Everybody back at Joe Gibbs Racing just went to work this week trying to get back to what we used to do here.  Proud of the effort; feel like we’re back in the game now.”