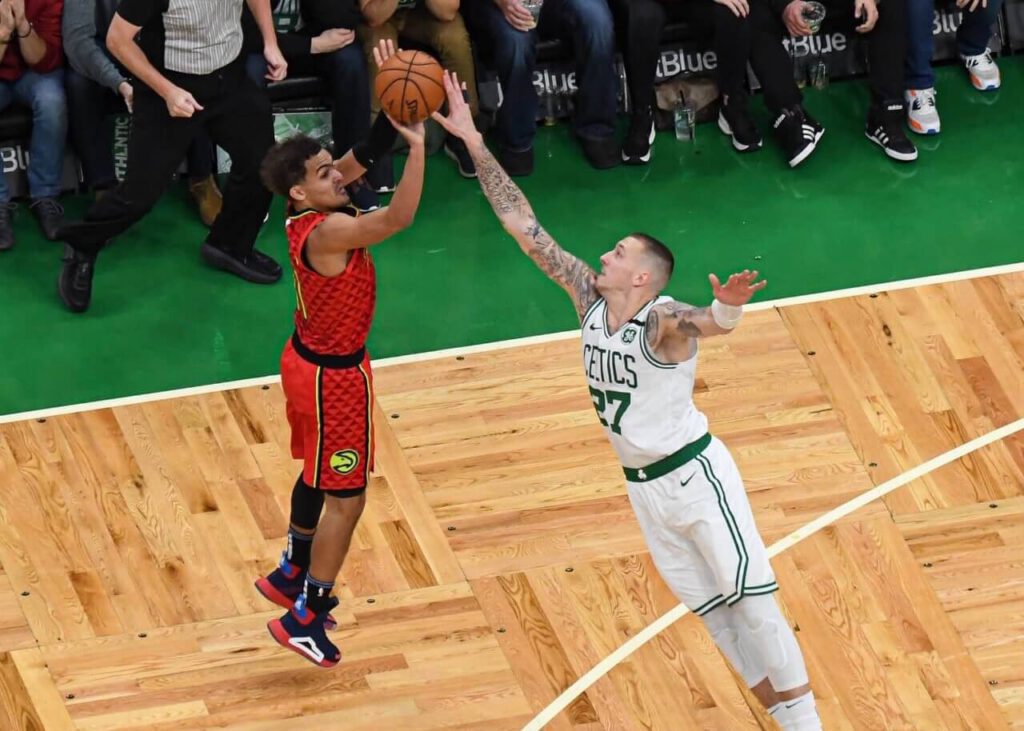 It’s one of the first things Celtics fans say in describing what makes Marcus Smart such a special player — he makes game-winning plays, they’ll tell you.

Smart certainly made a big play down the stretch of the Celtics’ 109-106 win against the Hawks. His 3-pointer found the bottom of the net and gave Boston a four-point lead with only 42.3 seconds left to play at TD Garden Friday night.

However, this time it wasn’t Smart who had the signature game-winning play — one that capped off what was an 18-point comeback and sealed a victory. With the Celtics ahead by only two, Theis blocked Hawks point guard Trae Young’s go-ahead 3-point attempt just before the Celtics reclaimed possession in the final seconds.

Boston, once again shorthanded, survived a potential upset at home.

Theis’ big night was fitting. It happened hours removed from a recent report suggesting the Celtics, along with other teams, were interested in trading for Pistons center Andre Drummond to address concerns surrounding Brad Stevens’ frontcourt.

Theis reminded fans, and possibly his head coach, that the Celtics may be fine without the likes of a big man like Drummond. His progression on the defensive end of the floor is an encouraging sign for Stevens.

“That’s a big-time basketball play,” Stevens said. “It sounds easy when we sit and talk about it but in the theories of the game and knowing Trae is capable of getting to the rim on anybody, that’s a huge, huge play.”

While some critics worry the Celtics lack size and need to reel in a big man in order to top their conference, Theis, along with Enes Kanter, have both risen to the occasion in at least two out of the Celtics’ previous three games. Kanter led the Celtics with a team-high plus-15 game rating to go with a career-high six blocks in Tuesday night’s win against the Hornets and Theis has been averaging seven points, 5.7 rebounds and nearly two blocks (1.7) a night throughout his last four outings.

“We believe in Theis, defensively and offensively. Theis has been doing big things and making big time plays for us — shut up, Theis,” Smart shouted towards his teammate after Theis made a friendly gesture while overhearing Smart’s kind words. “For him to be able to guard a guy like Trae Young in that situation where it’s quick, no timeout, they’re coming back at you — it’s a two-point game but not a lot of people probably know that but Theis.

“He’s did a good job at running him at the line and makes a good play when he steps back and blocks his shot. He’s been doing it all year for us.”

Atlanta generated 21 fast-break points and the Celtics’ defense once again — it’s been an ongoing pattern this season — struggled in defending the perimeter, where the Hawks tallied 16 threes. However, in the second half, the Celtics turned things around by defending the arc and strung together defensive stops in transition.

It was a group effort on defense — one that was anchored by Theis (14 points, 6 rebounds), Kanter (14 points, 11 rebounds) and Smart (15 points, 9 assists). Without Kemba Walker (flu), Boston got off to a slow start and spent the first half erasing its 18-point deficit with Jaylen Brown (24 points, 10 rebounds) and Gordon Hayward (18 points) leading the way.

Six Celtics players scored in double figures as Young caught fire from behind the arc — where he connected on five 3-pointers en route to a game-high 28 points and 10 assists.

Boston will take on the Bulls Saturday night, they traveled to Chicago following Friday’s win.