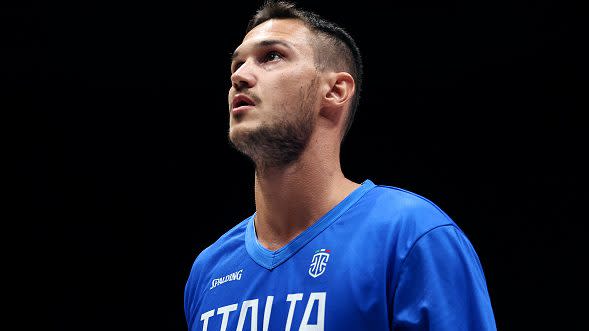 Gallinari had run in transition and tweaked his knee in a non-contact event while catching a pass, coming up hobbled as he ran toward the baseline and immediately getting met by trainers. The initial fear had been that Gallinari, who tore his left ACL in 2013 and is entering this season 34-years-old, suffered a far more severe injury.

There’s potential for Gallinari to miss regular season games, especially if he opts for a full repair of the meniscus, though he expressed optimism that he’ll return in a shorter timeframe. A tear removal or rehab of the knee could get him back on the floor in roughly 4-8 weeks, with 51 days remaining until opening night.

That seems like the more likely route for a 19-year professional seeking his first NBA championship. Unlike Robert Williams III, who returned to action three weeks following meniscus removal surgery into the first round of the playoffs, Gallinari and the Celtics can proceed more patiently with his recovery. Al Horford, Grant Williams and Williams III will hold down the front court in Gallinari’s absence.

“It hurts tremendously. Not so much the knee, that yesterday gave way in a race that was still won with character,” Gallinari said on Instagram in Italian. “For that it will take some time – fortunately less than expected – to return as before. It hurts as hell to give up this blue dream. We wanted to treat ourselves to magical nights. In my house. In our house. Unfortunately today it was a bad awakening. At the Milan clinic where I was accompanied by prof. Cortina and all the blue medical staff have received the results of the clinical tests: injury to the meniscus.”

Gallinari, former Celtic Luigi Datome, former NBA players Nico Melli, Nico Mannion and 2022 draft pick Matteo Spagnolo were playing in World Cup qualifier games this month ahead of September’s EuroBasket tournament set to begin Friday. It was potentially Gallinari’s final international competition as he approaches a 20 years of professional basketball between Italy and the NBA. He scored 10 points in 14 minutes earlier in the week against Ukraine, and had posted 17 into the fourth quarter facing Ukraine.

Gianmarco Pozzecco, Italy’s head coach, expressed fear that Gallinari had torn left knee ligaments. An MRI on Sunday morning confirmed meniscus injury on the knee he had two surgeries on while playing for Denver. The Celtics had signed the veteran to a two-year, $13 million contract in July, and have limited flexibility to replace him at this point in the offseason. They may not need to if he’s out short-term. The Celtics hoped he would boost the team’s bench scoring, relieve multiple starters of higher minute burdens and mix in some play at the five in small ball lineups, adding to what they already had

Boston made the Finals with Horford, Williams III, Williams and spot minutes from Daniel Theis when needed. Aaron Nesmith rarely played behind Jayson Tatum and Jaylen Brown, and a four-man back court gives the Celtics options to play smaller lineups. The team is high on Luke Kornet and Sam Hauser, who could fit into some of the minutes Gallinari would’ve claimed early in the season as bigger shooters.

If the Celtics want to fill out their roster with wing depth to limit the burden on their stars, Horford and Williams III after all played in a short rotation on the way to the Finals, Boston still maintains three open regular season roster spots, a $5.9-million trade exception and $6.9-million one that both expire closer to the trade deadline.

The team’s luxury tax situation could strain how far they’ll extend themselves to fill that spot though. Using the entirety of the larger TPE without sending out any salary would escalate the Celtics’ tax bill from $44.5-million $71.1-million. Even a $1.8-million veteran minimum addition like Carmelo Anthony would increase the luxury tax burden by over $6 million on the Celtics. The smaller TPE would push the bill to around $66.9-million.

Noah Vonleh, Bruno Caboclo, Justin Jackson, Brodric Thomas and Denzel Valentine are set to join the team on training camp deals, with tryouts likely to bring the team to the offseason maximum of 20 players. Mfiondu Kabengele, another front court option, and JD Davison are signed to the pair of two-way deals.

“I have to give up #EuroBasket,” Gallinari wrote. “Just in a summer that seemed perfect. We have to accept destiny and look forward. I will be alongside this group in every race, to give a joy to thousands of Italians again this summer. Our journey continues, regardless of everything.”