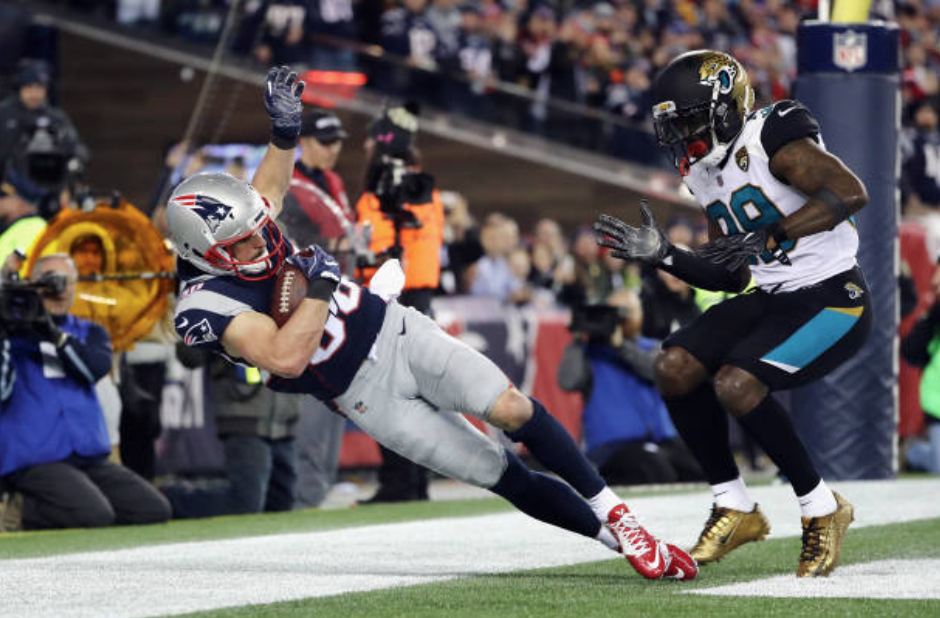 FOXBORO — The Patriots are headed to the Super Bowl for a record 10th time and they have Danny Amendola to thank for it.

The receiver came up with countless clutch plays and two fourth-quarter touchdowns to lead the Patriots over the battle-tested Jaguars, 24-20, Sunday night in the AFC Championship at Gillette Stadium. Amendola’s toe-tap catch for 4 yards in the back of the end zone with 2:48 was the game-winner.

The Patriots will face the Eagles in Super Bowl LII Feb. 4 in Minnesota in a rematch of Super Bowl XXXIX. The Eagles dominated the Vikings in Philadelphia, ending the hopes of the Vikings becoming the first time to play the Super Bowl in their home stadium.

Amendola’s numbers were good, catching seven passes on nine targets for 84 yards. But that doesn’t come close to measuring the clutch value of nearly every single catch he made. Every catch in the second half either extended a drive or resulted in a score. All After the game, it was Amendola who said he was most thankful for his time in New England.

“I’m thankful for my opportunity here and what it’s been the last five years,” Amendola said. “I have a lot of great memories here. Any negative thing or anything that’s tried to hinder me, I try to ignore and focus on the positive things that have been going on in this building for the last five years for me. I’ve tried to build off that and be a good teammate and that’s the only thing I really focus on.”

“It was great. He’s made so many big catches, and I saw he got the one foot in and I just saw it up on the big screen one time,” Tom Brady said of the game-winner with 2:48 left. “He’s got great hands and just a great sense about where he’s at on the field. So, I mean, he’s made so many big plays for us, and this was huge, and without that, we don’t win. It was an incredible play.

“‘Dola – everyone says it all the time – he’s clutch,” Devin McCourty beamed. “That’s another guy, you don’t worry about being prepared, you don’t worry about having to show up.”He exemplifies being a great teammate, he’s a brother in that locker room, a veteran guy, and [has] great leadership. To me, that’s what leadership is, and he shows up when we need it the most. Obviously, tonight we needed a big game out of him. I’m sure we’ll need more big catches in a couple weeks, and I’m sure he’ll be there ready to produce.”

Brady overcame his right thumb injury to post another epic second-half comeback from 20-10 hole, completing 26-of-38 passes for 290 yards and the Patriots overcame the loss of Rob Gronkowski to a concussion.

After declining to answer any questions about his injury on Friday afternoon, Brady, who was not wearing the black bandage he wore during game, was more forthcoming after the game.

“Never had anything like it,” Brady said of the thumb injury. “Well, I’ve had a couple crazy injuries, but this was pretty crazy. They come up and you just deal with them, and I wasn’t quite sure how I was going to do on Wednesday, Wednesday night, and then Thursday wasn’t sure.

“And then Friday gained a little confidence and then Saturday was trying to figure out what we could do, and Sunday, try to come out here and make it happen. You know, we all put a lot out there. I mean, this was a little injury at the end of the day. It’s certainly a big part of what a quarterback does. I mean, I’ve had a lot worse injuries than this, but if this was on my left hand, I could [not] care less, but just based on where it was, we had to deal with it.”

“I’d rather not wear (the wrap). But, I think it sounds kind of arrogant to say, ‘Oh yeah, it bothered me,’ when we had a pretty good game. So, I wouldn’t say that. Doesn’t that sound arrogant if I said that? It’s like when Tiger Woods said, ‘That was my C game,’ and he won the tournament.”

Stephon Gilmore broke up a fourth-down pass to clinch the Patriots’ third trip to the Super Bowl in four years.

Blake Bortles did the improbable and outplayed a dinged up Brady at Gillette for the first three quarters. Then Brady took over in the fourth.

Tom Coughlin, Jacksonville’s president of football operations was in the second row of the press box taking it all in.

With Rob Gronkowski knocked out of the game with a helmet-to-helmet injury late in the first half, the Patriots struggled to find any offensive rhythm.

Brady made all the throws in pregame, with accuracy and velocity. He even shook hands with teammates.

The biggest hurdle Brady had to clear in pregame was not his right thumb but rather a CBS cameraman who got too close and in the middle of Brady and backup QB Brian Hoyer as they took the field from the north end zone ramp. Brady yelled “F#$% out of the way” to the cameraman.

Tom Brady took the field and told the cameraman “F*** out the way”pic.twitter.com/eQ26FFH9R7

The biggest confrontation in pregame took place after Brady’s traditional pregame run down the Patriots sideline. After yelling “Let’s Go!” to the crowd in the south end zone, he turned around and was within earshot of Jalen Ramsey, who had words for Brady. The two briefly exchanged words and went about their pregame prep.

Tom Brady and his hand have safely arrived at @GilletteStadium. ? (Watch until the end to see him and Jalen Ramsey briefly go at it) pic.twitter.com/VFu5xfDmSJ

When the game finally began under ideal conditions of sun and 48 degrees, the Jaguars won the opening toss and deferred. Brady showed right away that the thumb wasn’t going to slow him down. He threw a swing pass to Dion Lewis for seven yards and a laser of a pass for 31 yards down the right seam to Brandin Cooks. Later, on 4th-and-1 after a Brady timeout, the quarterback threw a perfect pass to Danny Amendola on a fade to the left sideline to put the Patriots in the red zone at the Jaguars 10. But the drive stalled after two pass completions and a sack. Stephen Gostkowski’s 31-yard field goal put the Patriots on top, 3-0.

But the Jaguars took over from there.

After forcing a 3-and-out on the next Patriots possession, Bortles beat the Patriots defense again, spreading the ball with passes to the outside to Corey Grant and T.J. Yeldon and five power runs from Leonard Fournette, including a four-yard burst up the middle for a touchdown and a stunning 14-3 lead.

But the Patriots gained some valuable momentum going into halftime thanks to two costly penalties, including one that sent Gronkowski to the locker room for concussion protocol. With a first down at their 40, Brady threw a pass down the seam to Gronk. Safety Barry Church came over and lowered his right shoulder into Gronkowski’s shoulder to break up the pass. But Church’s helmet collided with Gronkowski’s helmet, sending Gronk to the ground. He got up wobbly as Chris Hogan came over to examine.

Helmet to helmet on Gronk. Nasty hit, could be done for the day. pic.twitter.com/IjSImUrrSX

Gronkowski made his way to the sideline, then to the tunnel and locker room for concussion protocol. The flag came out for unnecessary roughness and the Jaguars lost their collective minds. On the next play after the 15-yard penalty, Brady threw for Cooks down the left sideline. A.J. Bouye ran Cooks out of bounds and was called for a 32-yard pass interference, putting the ball at the Jacksonville 13. Two plays later, it was James White off left tackle untouched for a touchdown that made it 14-10 at the half.

There was early optimism on Gronk after the game that he would go through NFL concussion protocol and be ready for the Super Bowl on Feb. 4.

Rob Gronkowski is in the concussion protocol. There’s optimism Gronk will be cleared by the Super Bowl, according to a source

The Jaguars came out with the ball and managed a third down conversion when Bortles found Yeldon for nine yards on third-and-8 at the Jaguars 49. The Jaguars managed to move the ball to the Patriots 36 and Josh Lambo connected from 54 yards to make it 17-10 with just over 10 minutes left in the third quarter.

Brady connected with Danny Amendola on a crossing pattern over the middle for 17 yards on third-and-5 to get the ball out to the Patriots 47. The Patriots had momentum. And then Cooks beat his man on a deep out to the left sideline, Brady put the ball right on Cooks hands but the receiver dropped it. On their next third down chance, a Brady pass to James White came up three yards short and the Patriots punted away.

The Jaguars extended their lead to 20-10 when Lambo connected from 43 yards on the first play of the fourth quarter.

The Patriots went back to their 2014 roots with a Brady-to-Amendola-to-Lewis 20-yard double pass. It all went according to plan until Myles Jack forced the fumble at the Jacksonville 33. After review, the ruling of fumble on the field stood and the Jaguars dodged a major bullet.

But the Patriots forced a punt and came back thanks to a huge play by Danny Amendola on third-and-18. Brady found his clutch target over the middle to keep the drive alive.

“The third-and-18 play, basically I think I had a little bit of an option route in the middle of the field and I saw that there was room,” Amendola said. “I had pointed out the line [to gain] before the play snap so I knew where to get to and Tom had a laser and it was perfect.”

Then the Patriots converted a flea flicker when James White tossed it back to Brady, who found Phillip Dorsett for 31 yards to the Jaguars 23. Brady then found Amendola for 14 yards down to the 9. On the next play, it was Brady hitting Amendola for nine yards and the touchdown that brought the Patriots within three, 20-17, with 8:38 left.

The Patriots forced another punt and then got a 36-yard pass interference penalty on Jalen Ramsey defending Cooks, putting the ball at the Jaguars 45. But the Jaguars stopped Brady with three incompletions on the next three snaps and forced a punt. The Jaguars took over at their 10 with 5:53 left, leading 20-17.

Following a 20-yard punt return by Amendola to the Jacksonville 30, the Patriots were immediately in field goal position. But Brady hit White on a screen for 15 yards. Brady then went over the middle and Amendola made a spectacular outstretched catch. Brady then found Amendola on a play-action toss for the game-winner in the back of the end zone, with Amendola getting both feet down with 2:48 left.