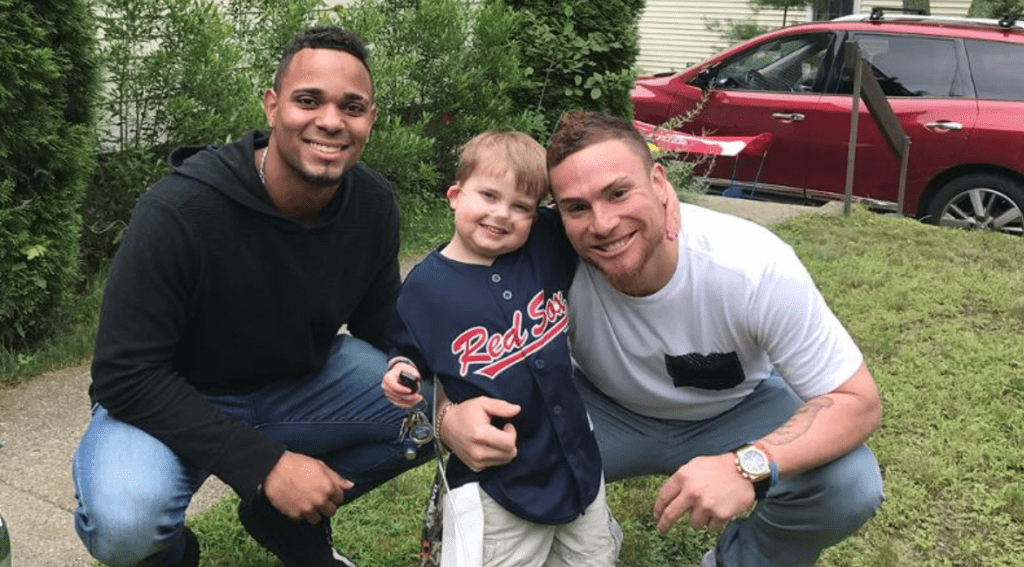 BOSTON — The memory of Ari Schultz lives on in the hearts of the Red Sox and his life will forever be a part of the Boston sports fabric.

That was reinforced Tuesday night at the third annual Globies, when Red Sox team president and general manager Dave Dombrowski accepted a goodwill award on behalf of two of his players – Christian Vazquez and Xander Bogaerts. The two Red Sox players were recognized for their emotional support of the 5-year old, who lost his battle with a heart condition on July 21.

But not only was Dombrowski there to honor his players, the Red Sox executive also paid tribute to the courage shown by Ari’s parents, Mike and Erica Schultz from Stow, Mass.

“I want you both to know you’re loved and will always be welcome at Fenway Park,” Dombrowski told the parents Tuesday night before a packed house at the House of Blues, just across Lansdowne from the center field gate to Fenway.

Ari’s parents knew their son would have an uphill battle even before he was born. Ari was diagnosed with an extreme form of critical aortic stenosis, which limits the flow of blood from the heart to the body. Ari had two in utero heart surgeries to try to correct the issue.

It was Vazquez and Bogaerts who arguably provided Ari the most comfort during his short life. The two Red Sox players came over to Ari’s house to play catch with him in the backyard and read to him.

“It tells you the type of individuals they are when they can spend their time contributing to great causes but heartbreaking situations,” Dombrowski told CLNS.

There were several other honors Tuesday night, including team MVPs awarded for the Red Sox, Patriots, Celtics, Bruins and Revolution.

One of the big winners was Boston College two-sport star Kenzie Kent, a standout in both women’s ice hockey and lacrosse. Kent took home both the Female Athlete of the Year honor along with the college athlete of the year.

Patriots quarterback Tom Brady was recognized as the Male Athlete of the Year.

For a full list of winners, visit the winner’s page.