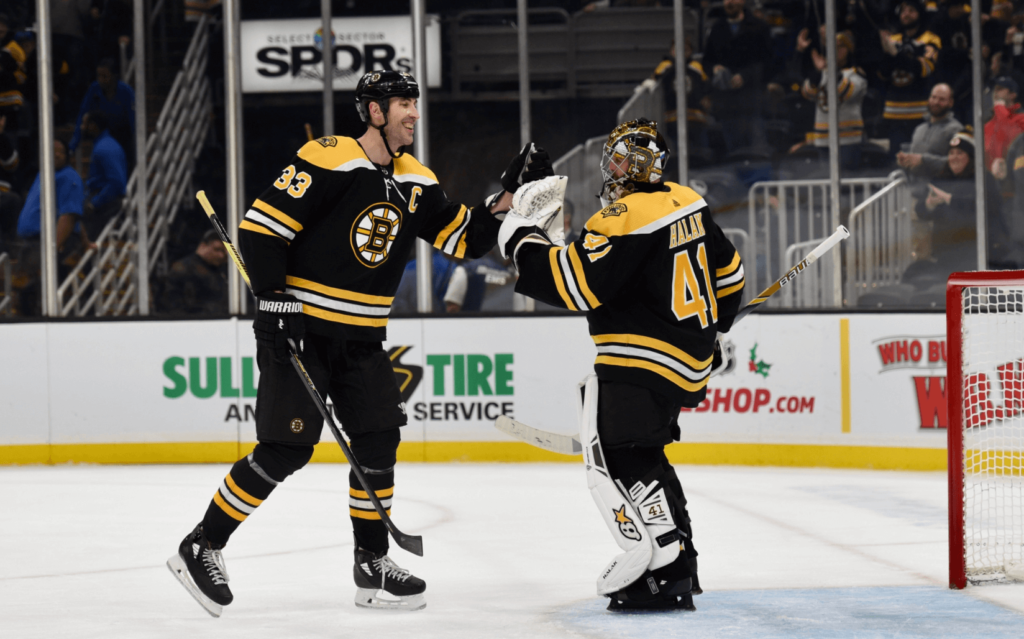 BOSTON – Don’t be surprised if the Bruins meet the Hurricanes again this spring in the Stanley Cup playoffs.

The Bruins played Tuesday night like they expect as much.

And that’s to say they understand the moment. The 2019-20 Bruins are putting together a first half of the season for the record books.

They want to prove to everyone – including themselves – that they have every intention of getting back to the Cup and finishing the job this time.

That’s why a game like Tuesday mattered. The Carolina Hurricanes entered Tuesday night as one of the hotter teams in the NHL and 16-10-1 record in the Metropolitan Division. The Bruins, who swept Carolina in last spring’s Eastern finals, were riding a 7-game win streak and the best record in hockey at 19-3-5.

The Bruins, thanks to a pair of milestones from their goalie and a veteran leader, beat Carolina, 2-0, at TD Garden to extend their win streak to eight and their home point streak to 16 games, which began at the start of this season. The eight wins in a row is the most since 12 straight from Mar 2-22, 2014, the last year they captured the Presidents’ Trophy.

The home point streak is the best since their opened their 1973-74 season with a 19-0-2 mark at the old Boston Garden.

The two teams met for the first time since last year’s Eastern Conference finals and for the first of three regular season meetings Tuesday night and it was a flashback to last spring’s tight-checking affair.

“It was similar. I think it was hard, they play hard,” Coach Bruce Cassidy told me. “They’re a good team, play a good style of hockey. I thought there was some similarities, for sure. It’s not maybe as physical, finishing every check that you’ll see in April and May and June, but I thought it was hard hockey and committed hockey on both sides.”

Hard hockey and committed hockey are two words that every Bruins fan wants to hear, no matter if it’s the first week in December or the second week in June. That’s why the way the Bruins approached Tuesday night was so significant.

With a backup goalie playing his 500th game and a center re-discovering his scoring touch of late, the Bruins were patient, waiting for the right moment to seize control. That moment came when Charlie Coyle re-directed a Brad Marchand pass past James Reimer for a 1-0 lead with just 4:05 left in regulation. David Krejci would add his 200th career goal 68 seconds later to seal Boston’s eighth straight win.

“I didn’t really think about it. It’s just a number. I’m here to help the team. I haven’t really thought about it.”

“I know he’s a pass-first guy, but I always assumed he had more than that to be honest with you,” Cassidy added. “I don’t mean that in the wrong way, it seems like he’s been playing in this league as long as I can remember. I’m happy for him. He’s an unselfish guy, would rather pass first anyway, look after his teammates that way. Nice goal to score, going to the net too. Both of them were like that eventually, we got some separation. Took us a while, but tight checking games, so good for David. Good guy, good pro, good teammate.”

The 19th player in #NHLBruins history to reach 200 goals.

Even though this game was scoreless through two periods, it did not have the feel of a Bruins start of late where they were slow to get their engines started. This game was simply a tight-checking affair with not a lot of space given on each puck possession. But the Bruins were patiently waiting for the right moment to seize control.

Cassidy spruced things up a bit by changing the top two lines, putting Brad Marchand on the line with Charlie Coyle and Danton Heinen while Jake DeBrusk was “promoted” to the Czech Mate line with Pastrnak and Krejci.

Through two periods, the only goal was one that didn’t count because Jaccob Slavin’s backhander went through the side of the net. Halak would eventually stop all 24 Carolina shots in recording his 49th career shutout and second this season.

“(He) might as well get it with a shutout, right? Good for him. He battles hard in there. In my opinion, he’s a number one goalie in this league, he’s proven that. He plays great for us, gives us a chance to win every night. So for us, for a coach, for players out there, knowing it doesn’t matter who goes in the net, you’re going to get quality goaltending.

“Give us a chance to win and more every night. I think the guys are real happy for Jaro, he’s a guy that battles in practice too for the guys as he takes those extra shots when he needs to be. I thought he was real good tonight.”

The Bruins rescued Halak from the obscurity of the Islanders two years ago. Halak was playing in the AHL three seasons ago, something he didn’t forget Tuesday night after playing his 500th game in goal.

“Three years ago, I found myself in the minors so I just try focus on now,” Halak said. “What happened in the past, happened in the past. I’m just glad I’m part of this group because it’s a great group. We are so close in here and we keep proving it on the ice. We stick to the game plan for 60 minutes. We believe that in a tie game or even if we’re behind, we can come back and win.”

The responses of Krejci and Halak reveal a ton about the mindset of this team. There’s really little though given to individual accolades on a team with much, much higher aspirations. The priorities and collective mindsets of the individuals on this team are in the right place.

The way they’re playing the game right now shows their bodies are also.

“It shows that we’re conditioned, and we have will, both,” Cassidy said. “We know how to play when the game is on the line. We’re still focusing on our start. I didn’t think it was poor tonight by any means, so again, piecing together 60 minutes, but you’ve seen here, the home games, we’ve really stepped it up when we needed to.

“It’s the sign of a good team. No team is going to have it together for 60 minutes every night, we’ve talked about that. We’re building like everyone else, but yes, to answer your question, to be able to win games when you need to and to use everybody; we didn’t have to shorten the bench tonight. Certainly, our top guys, they’re going to play their minutes, but I thought everyone was involved, did their job, and that’s why it was a great team victory tonight.”

Right now, those victories are adding up quickly. The trick will be to maintain this level all season and into the spring.