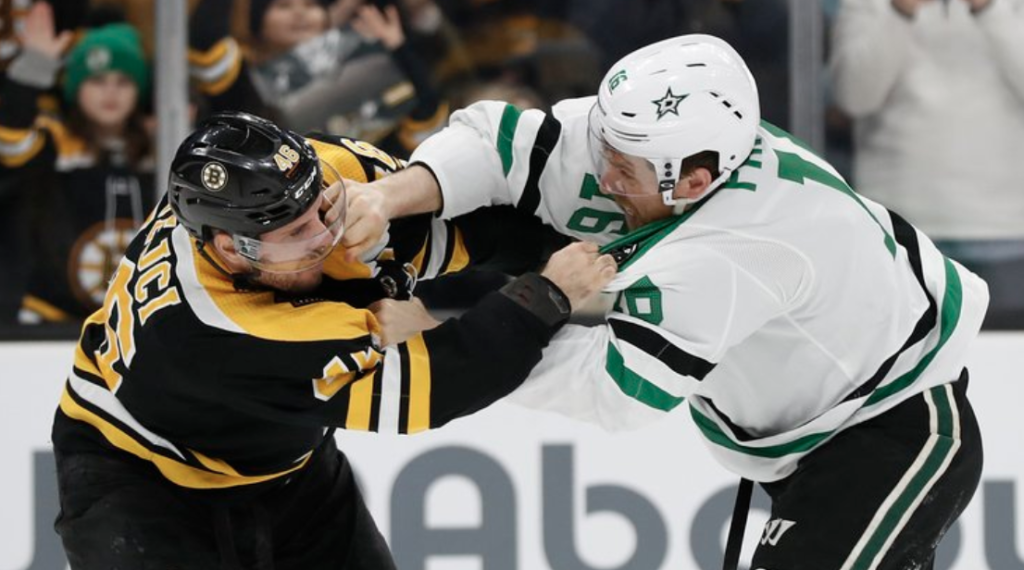 BOSTON – Nothing like a David Krejci fight to break the Bruins from late-February slumber.

When the second line center dropped the gloves with another veteran – Joe Pavelski – 11 minutes into the second period, the Bruins were tied up with Dallas Stars, 1-1, and in the midst of a game that was leaning toward the visitors for a second time in three nights.

Following Krejci’s first fight since Sept. 28, 2017 (Nolan Patrick in a preseason game in Philadelphia), the Bruins played like they had indeed been awakened, including one of his brand new linemates.

Nick Ritchie was the biggest beneficiary of Krejci’s wake-up call for the rest of his teammates, as Ritchie scored once at the end of the second period and set up David Pastrnak for his 46th goal of the season in the third period in a 4-3 Bruins win Thursday night at TD Garden.

“Well, it sure appeared a lot, right? I mean, get a couple old-timers like that going at it. I mean, everyone enjoys it,” Cassidy said. “I don’t know much about Pavelski, but Krech, I’ve seen him in a few over the years. He can hold his own. He’s a good partner for him, looked like there were two willing guys going at it so that’s just some of that stuff that happens in hockey through the course of the game. It’s organic, nothing staged there. It certainly woke us up. Not that I felt we didn’t have it early on, but gave us a little extra juice. Let’s put it that way.”

“It was nice to see the guys respond,” Krejci said of his teammates’ answer to his battle. “Just one of those things. I felt like he was a little over the line towards me. That was a good win, a good bounce back win.”

It was actually Krejci’s first regular season fisticuffs since a memorable brawl against Montreal’s Benoit Pouliot in February 2011.

After getting outscored 14-5 in losses to Vancouver and Calgary, the Bruins were a lot tougher on the puck and harder along the boards. All of this after Cassidy called his team out for not putting up a good enough effort after the 5-2 loss to the Flames.

“Yeah, we responded,” Cassidy told me. “I don’t know whether it was the challenge or not. I was asked a question; I answered honestly, and I think they would’ve, no matter what I said, I think we would have responded, to be honest with you. I mean, I think they were aware it wasn’t our best. I didn’t want to get into it after the game about circumstance; I think there are certain points of the year the schedule gets you a little bit, and I thought there was a stretch there that it did get us, and that had something to do with it, but we needed to be better, and we were tonight.

There was added significance to the win. The Bruins now have 92 points, seven point clear of the suddenly slumping of Tampa Bay, which lost its fourth straight Thursday night.

“Yeah. I think it’s a number of things, but yes, the leadership, the guys’ will to compete and win,” Cassidy said. “They hate losing, good talent in there, either goalie goes in, we know we have a chance to win, so there’s a lot of things that go into it. But yes, it probably starts with the kind of identity of the team, the culture of the team that there’s a standard we’re going to play to. We didn’t get to it the last few nights, and we wanted to make sure we got to it tonight. we were a lot closer, let’s play it that way.”

Just over three minutes later, Charlie McAvoy fed Brad Marchand in front of Ben Bishop and Marchand didn’t miss, staking Boston to a 2-1 lead. Just over a minute later, it was 3-1 when Nick Ritchie tallied his first goal in a Bruins uniform. The player who looked stiff and out of sorts Tuesday night in his first game against Calgary looked much better Thursday.

Another night, another debut for a Bruins player acquired just before the trade deadline.

Ondrej Kase got his chance Thursday against Dallas after missing Tuesday night recovering from illness and shoulder issues that landed him on injured reserve.

Kase opened the game on the right side of David Krejci while his former Anaheim Ducks teammate Nick Ritchie, who couldn’t muster a shot on goal Tuesday against Calgary in his Boston debut, opened on the left. At this point, Bruce Cassidy figures anything to jumpstart a second line that is struggling to find any rhythm at all.

“Ondrej looked like he hadn’t played in a while, was trying to find his groove there a little bit. A little bit rusty. I think Nick was much better than the other night, a little more into the game. Puck was finding him. And we knew that would happen, I just thought it was unfair the other night. You fly in, it’s a lot of newness going on. He’s had a couple of days to acclimate a little bit.

“Listen, I’m not going to say he’s going to get two points every night, but he’ll probably be somewhere in between there and that’s what we expect out of him. A bigger body, especially in this type of game I thought. They’re a heavy team, they finish checks and you’ve got to work to get to the net. And I thought he did a real good job with that.”

Even when the Bruins fell behind early, Cassidy was pleased with the improved effort.

As for Ritchie, he was clearly in a better place and it showed.

“It was nice to score, nice to win,” Ritchie said. “Energy levels were higher and felt better on my legs. I definitely played a better game and the team played better as well.”

“Goalies at both ends were good,” Cassidy said. “There was a lot of missed opportunities it seemed like for two good, defensive teams. I mean, it was a hard game. From the ice level, guys were playing hard and battling hard and some big bodies out there and some good pace. It was a good hockey game both ways; I’m just glad we came out on the right end of it.”

The Stars took the lead when John Klingberg snapped a shot from the high slot that was re-directed past Jaroslav Halak as Matt Gryzelcyk was serving a hooking penalty.

The Bruins got that one back with 15.8 left in the first when Charlie Coyle played pepper with airborne puck and batted it out of midair and behind Ben Bishop. The score was 1-1 after 20 minutes.