David Pastrnak continues to carry the load as Bruins edge the Jets, 5-4 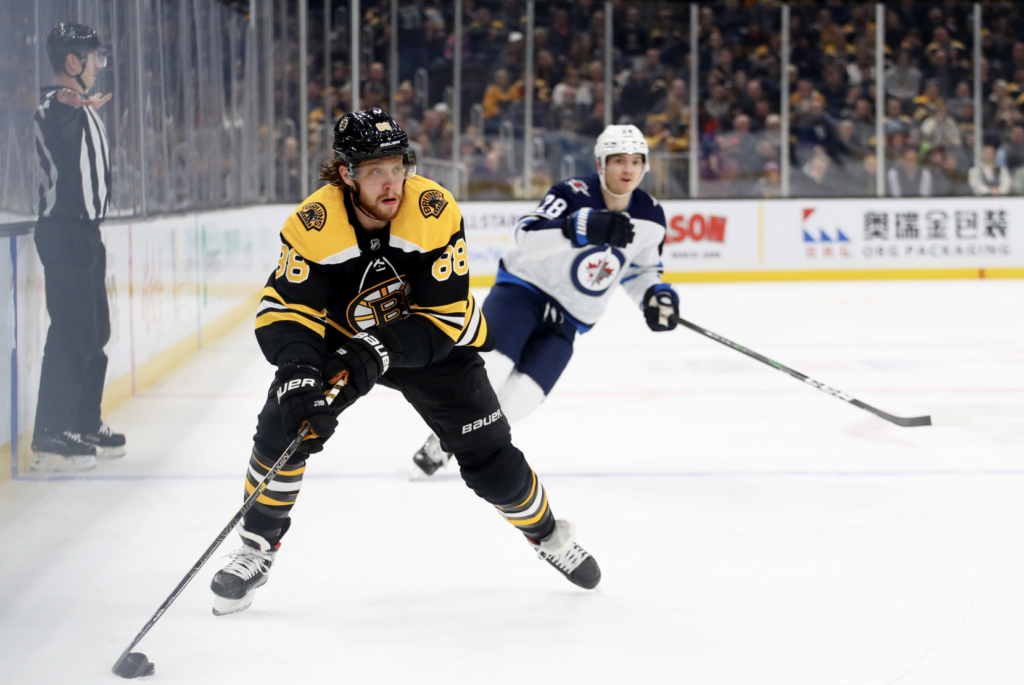 BOSTON – Sure, the Bruins might be too dependent on one player to do most of their goal scoring. But what we’re watching in David Pastrnak scoring from all angles all over the ice is something to behold.

Cam Neely was the last Bruins to pot 50 goals in a season and it was the work stoppage season of 1993-94.

Pastrnak, with his third hat trick of the season Thursday night in a 5-4 see-saw win over the Winnipeg Jets, now has 35 goals on the season. He’s on pace for 62. He would be the first since the great Phil Esposito in 1974-75 to reach the 60-goal plateau.

“I don’t think about it,” Pastrnak insisted to me when I reminded him of his torrid pace. “It’s nice. That’s what I’m here for. It’s the kind of player I am. Just keep working and getting better, you know.”

Maybe Pastrnak was inspired by the red-hot scoring of Auston Matthews of late, who’s had four goals in his last three games and entered Thursday just one behind Pastrnak in the NHL goal scoring race. Or, maybe he was motivated by the presence of his mom (along with several other player moms) and his brother. Whatever the inspiration, Pastrnak looks like he’s definitely in a good place.

“He’s a great goal scorer,” Pastrnak added. “That’s nothing new. That’s not something I’m focusing on. I’m just playing my game and trying to help my team. It’s a team sport. None of this matters. We got the two points.”

And the Bruins wouldn’t have recorded the two points if Pastrnak didn’t answer the bell when his team needed him the most Thursday. Not once, not twice but three times Pastrnak scored when his team was down a goal. Boston trailed 1-0, 2-1 and 4-3 and each time it was Pasta with the equalizer.

What Pastrnak is doing is worth noting because he’s nearly carrying a team that has had precious little scoring production from anyone not named Pastrnak, Marchand or Bergeron.

Ironically, Thursday night Jake DeBrusk had just his second multiple-goal game of the season, providing the other two markers that Pastrnak didn’t score in a one-goal win. But to Bruce Cassidy, the production of Pastrnak and DeBrusk was the result of lots of parts moving together in rhythm, something that before a 6-2 win in Nashville Tuesday night, was missing of late.

What a ?.@pastrnak96 | #NHLBruins pic.twitter.com/UyfXUaMiqi

“It was good. Two guys ended up being the (only goal scorers) and rightfully so,” Cassidy told me afterward. “The guys ended up on the scoresheet. But I thought [Sean] Kuraly’s line — Chris Wagner had the best game of the year offensively. Hit a post, was in all alone, breakaway, guy makes a great save, had a couple other point-blankers. Their line was going, I thought Nordy [Joakim Nordstrom] gave them a lot of energy. When he’s skating, it makes a difference on that line.

“So they were good. [Charlie] Coyle’s line the other night had a lot of — you know, some offensive play tonight, not as much, but that’s where Jake picked it up with Krech [David Krejci] as the game went along. Typically, Bergy’s line, they’re going to give you offense. Pasta ends up finishing some shifts on the other lines and ends up scoring, kind of extending his shift. Wags [Chris Wagner] got pulled off by the spotter and we happened to throw Pasta out there and the puck finds him so it worked out well for us in that regard. I think the last two games you’re seeing more up and down the lineup whereas the few games before that it was a struggle for some guys. But it’s a long year and you hope they’ll come out of it and it looks like, at least in the short term here, we have.”

What will take this Bruins team to the next level is production from DeBrusk. It’s why Cassidy has been so public and vocal in his criticism of the winger’s game. Cassidy’s motivational techniques seem to be hitting home, as he’s recorded a pair of 2-goal games in the last six he’s played.

“Jake knows his value to this team,” Cassidy said. “It’s an offensive role, building his 200-foot game. That’s no different than anybody else, but he makes us better when he’s winning races to pucks, and that’s what he did on those. He squeezed one in, kept one in or blocked a pass down the wall and won a foot race. Maybe they were in a line change; it was hard for me to see, but all of a sudden, he comes out of the pile. The other one was just him putting a puck into an area and going to get it. That’s what you need more of out of Jake, more of that second effort on pucks. That’s what we encourage Jake to do every night, because he has the ability to do that.”

Too bad Chris Wagner, Charlie Coyle, Danton Heinen and David Krejci could find the goal-scoring touch of Pastrnak – or DeBrusk – for that matter. All of them had point-blank chances on Laurent Brossoit in the second and third periods and couldn’t finish.

But that’s ok – for now. David Pastrnak is more than capable of providing the finishing touch on each and every scoring chance that comes his way.