David Price Booed Out Of Fenway After Another Disastrous Playoff Performance 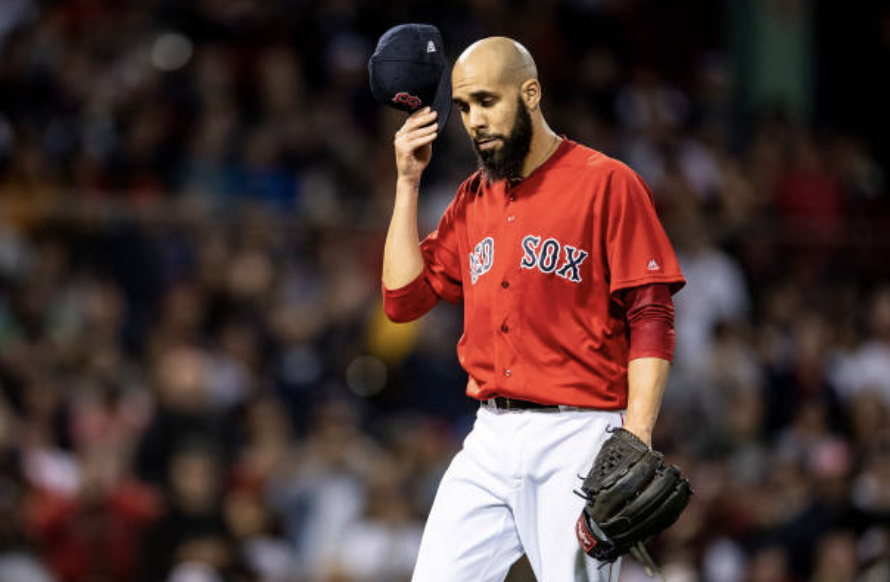 BOSTON — If David Price truly wants to stay in Boston for the next four years, he better learn how to handle the Yankees.

Everyone knows he’s getting paid $217 million over seven years. And everyone knows the real reason that price tag is so high is to come up big as a postseason ace. For the better part of three months this season, and while Chris Sale was on the disabled list, he was the ace and pitched like it.

But certainly not Saturday night in Game 2 of the American League Division Series, his biggest game of the season so far.

In an awful outing that brought out angry boo birds from the Fenway faithful Saturday night, Price managed to retire just five batters, throw 42 pitches and yield two rockets for home runs as the Yankees jumped all over the Red Sox starter. Price took the loss in the 6-2 Yankee win before 39,151 at Fenway Park, leveling the best-of-5 series, 1-1, and assuring two games in the Bronx Monday and Tuesday nights.

Much had been made of Price’s 0-8 career postseason record in his nine career starts in the playoffs. Price started four games against the Yankees this season and was 0-3. Maybe we really should’ve seen this coming all along.

In four starts against the Bombers, Price allowed 21 hits, 20 runs and nine homers in just 15 2/3 innings. Twice Price didn’t reach the fifth inning, including a one inning outing back in April at Fenway.

Everyone remembers the July 1 meltdown at Yankee Stadium, when the Yankees beat him around the Bronx to the tune of eight runs and nine hits in 3 1/3 innings. But three times in his four starts, the Yankees scored double figures.

Which is precisely when Cora sprung from the dugout after Andrew McCutchen ripped a single to left with two outs in the second. It was already Joe Kelly time. Price made his way off the mound, doffed his cap quickly and walked slowly to the Red Sox dugout amidst a chorus of boos as loud as he has ever heard in his three seasons in Boston.

“It’s tough. You know, just after we won Game 1 to go out there and have that opportunity to go up 2-0,” Price said in owning up to his ninth postseason loss as a starter in 10 career postseason chances. “And to throw the baseball the way that I did, it was definitely tough. But my spirits aren’t down, my confidence isn’t down. I’m looking forward to getting back out there and getting another opportunity.”

Price wasn’t upset at getting pulled after just 42 pitches.

“It’s the playoffs,” Price said. “You see it happen all the time, especially over the past couple of years. Managers go into bullpens extremely early. If I don’t like it, I need to pitch better, period.”

In this best-of-five, when does he think he could come back to pitch again?

“Location. 0-2 or 1-2, back-door cutter to Judge leaves it over on the middle of the plate,” Cora said. “Back-door cutter to Sanchez, he was leaning out over the plate and he extended. And McCutchen got on top of a fastball. It’s all about location. We can elevate, we’ve been talking about the whole season, when it’s in the same plane. It seems like the velocity was very in the same range as far as like his pitches, they take advantage of it.”

If you think Cora will default to moving Price to the bullpen after his Game 2 disaster and in light of his 2017 effectiveness in relief, think again.

“No, no. He’s one of our starters,” Cora said. “Just a bad outing today. It just so happened it wasn’t his day. He didn’t make pitches. We trust him. He’s bounced back before. We’ll talk to him to make a few adjustments. And we’ll go from there.”

After McCutchen grounded out to third to open the game, Price offered up a 90 MPH fastball to Aaron Judge. The slugger didn’t miss, crushing the pitch 445 feet over the Monster seats between the flag pole and the light stanchion for a 1-0 Yankees lead.

Gary Sanchez connected on the first of his two homers in the second, drilling a Price fastball to the second row of Monster seats for a solo homer and a 2-0 lead.

After walks to Gleyber Torres and Brett Gardner, Andrew McCutchen singled Torres home and it was 3-0. Price appeared to be squeezed twice by home plate umpire Dan Bellino, including on Ball 3 to Gardner, which could’ve ended the inning. Instead, Price couldn’t respond. The fans had no such problems, booing him the moment Cora popped out of the dugout.

Most Red Sox fans wanted to believe Price could solve his postseason starting problems and his Yankee fears in one fell swoop. Saturday was not to be that moment. Not by a long shot.

On the bright side for Price, he wasn’t the worst pitcher of the night for the Red Sox. Eduardo Rodriguez, who was chastised exactly one week earlier for his lack of urgency in a blowout loss to the Yankees at Fenway in relief, failed to cover first base on a slow grounder to the first base side of the infield grass. He just jogged over and wasn’t close to covering the bag. Several batters later, Sanchez launched the longest home run seen at Fenway this season, a 479-foot space shot over everything in left-center for a 6-1 lead.

Hard to imagine either Price or Rodriguez playing a big role in the next two games at Yankee Stadium but if Red Sox-Yankees in the playoffs have taught us anything, it’s expect the unexpected.