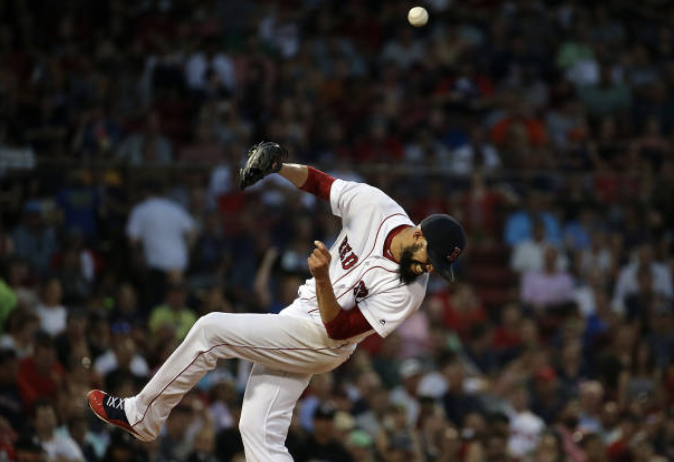 BOSTON — These 2018 Red Sox are on a clear path to set a new franchise record for wins, previously held by the 1912 bunch that went 105-47-2 and captured the World Series. That’s something that gives nearly everyone in Wednesday’s team photo at Fenway ample reason to smile.

Wednesday’s 11-run, seventh-inning explosion against the lowly Marlins highlighted a 14-6 win at Fenway Park that returned them to 50 games over .500 at 92-42. If only the Red Sox could match up against the Marlins bullpen in October.

But there’s a clear and present danger that has been exposed, even as the team was piling up wins in August. And it can be summed up in one question: Is the bullpen reliable? This isn’t fear mongering about a team that’s 50 games over .500. It’s cold, hard reality.

There’s so much that goes into that question. Roles, usage, leverage but most of all, trust. Who will Alex Cora go to when setting up Craig Kimbrel when the game is on the line in the postseason?

While the team as a whole ripped it up early in the month, two key pieces of the pen struggled mightily.

Matt Barnes has been hit around to the tune of a blistering 9.64 ERA, a 1.71 WHIP while yielding a slash line of .308/.378/.667 to opposing batters. In Tuesday night’s 8-7 win over the Marlins, Barnes was handed a 4-1 lead in the eighth and imploded, allowing four hits, four earned runs, including a 2-run homer.

Another righty, Heath Hembree, has fared even worse. In 7-1/3 innings, Hembree has allowed 10 hits, eight runs, six earned, while surrendering an ERA of 7.36 and a WHIP of 2.18.

Dog days or not, this bullpen is getting exposed.

Starting pitching – which had been a strength of the Red Sox for the first four months, has suddenly stumbled and contributed to this bullpen burnout. With David Price getting knocked out of Wednesday’s start in the third inning with left wrist contusion, the Red Sox have just one quality start in their last 10 games. The overworked bullpen has posted a 5.29 ERA over that period.

In a season that has seen Dave Dombrowski bolster the Red Sox roster with several savvy moves, including Steve Pearce and Nathan Eovaldi, the one area he said he felt comfortable with at the July trade deadline was the bullpen. His explanation at the time was that the asking price was simply too high for the potential return of an arm like Brad Hand or Fernando Rodney.

In a five-game series, Cora might think of throwing Eovaldi or Johnson into that mix. But that strategy may have taken a direct hit Wednesday when Austin Dean sharp liner connected with the left wrist of David Price. Immediately, there were thoughts of the Jim Rice wrist injury in September 1975 that knocked out the slugger from the playoffs. The Red Sox may have dodged that bullet when it was announced innings later that x-rays were negative but that “further tests will be done as needed.”

“It sucks to see that,” Cora lamented after. Indeed. The last thing a tired, weary bullpen needs is for the club’s best starting pitcher since the All-Star break to go down indefinitely. Price was good spirits, even joking that he’ll be hitting on Monday in Atlanta, his next scheduled start. Cora tempered that a bit after Wednesday’s game, acknowledging that hitting might not be the best thing for his wrist.

Price has been exactly what the Red Sox needed with Sale spending a pair of stints on the DL. Heading into Wednesday’s start, he was 6-0 since the All-Star break with a 1.09 ERA. He allowed a measly five earned runs through 41-1/3 innings.

With Chris Sale already on the disabled list with “mild left shoulder inflammation”, Red Sox fans are right to be very concerned about the domino effect come the final four weeks of the season and, more importantly, in October.

Even ace closer Craig Kimbrel is not immune from the August bullpen burnout. In Tuesday’s win, Kimbrel, like Barnes, entered with a lead. This was a save opportunity in a 7-6 game. Kimbrel, who has been mostly lights out for the first four months, has suffered his own power outage in August. In his first eight appearances of the month, Kimbrel allowed six hits and four runs with an ERA of 4.50 and two blown saves.

If you’re looking for a positive of late, it’s Joe Kelly. In an up-and-down season, Kelly has been a true rollercoaster ride of a reliever. Kelly has a 1.54 ERA in his 12 outings during the month of August, leading Cora to suggest that he might just be returning to a “high leverage” role in the pen.

During his weekly appearance on WEEI’s “Ordwary, Merloni and Fauria,” Cora admitted that he is regaining faith in the hard-throwing righty, who was in the eighth inning role early in the season.

“Little by little, I think he’s made some adjustments as far as his stuff,” Cora said. “He’s been able to land off-speed pitches now early in the count. There was a period there that he was always down 1-0, 2-0. It really doesn’t matter if you throw 100 or 85, if you’re behind in the count, you’re going to get hit. He’s using his fastball in different spots, you saw him yesterday going down and away against lefties.

“Usually he goes up and he was getting hit with pitches up in the zone. He’s made some adjustments, little by little we’re getting him there,” Cora continued. “We used him against Cleveland with traffic, something we did early in the season, he was coming with bases loaded and two outs, shut it down, go to the next inning, we did it against the Indians. He’s feeling a lot more confident, you can see it, and I’m feeling a lot more confident now with the stuff that I see on the mound.”

In a record-setting first season, Cora knows he will be judged, ultimately, on how these Red Sox perform in October. And how they perform is going to hinge on how effective his bullpen is in the postseason. With Price getting knocked out Wednesday and Chris Sale still on the DL, we’re about to see how Cora handles his toughest test to date.