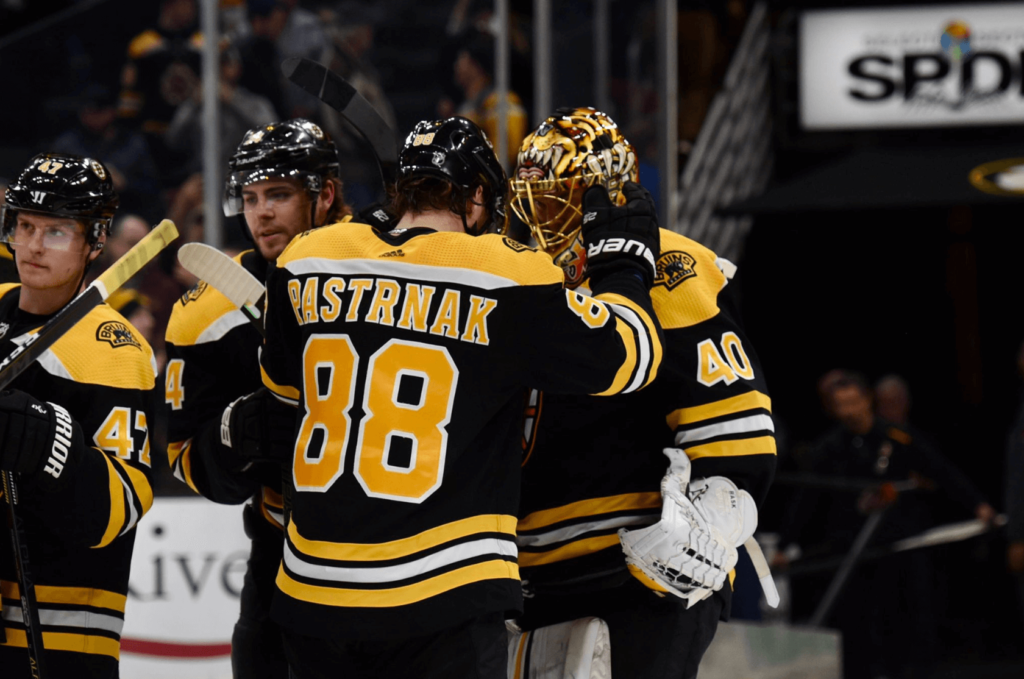 BOSTON – Sometimes you don’t have to be flashy to be spectacular.

The Bruins were precise and sound when it mattered most Tuesday in a 4-0 win over the Pacific Division-leading Canucks at TD Garden. Tuukka Rask stopped all 25 shots he faced and four different skaters scored for a Bruins team that is now a perfect 3-0-0 since the break.

The Bruins are now 32-10-12, good for 76 points, just a single point behind Washington for the best record in hockey. More to the point, the Bruins are starting to look like the fundamentally sound team that caught fire in the second half last season and rode the momentum to the Stanley Cup Final.

Tuesday night was a clinic in end-to-end hockey.

Not everything went their way, like Charlie Coyle and Chris Wagner getting stopped on short-handed breakaway opportunities.

They committed a pair of penalties in the second period that gave the Canucks some life.

And the Bruins converted just one of six power play chances and generated just one shot (and no goals) on 60 seconds of a 5-on-3 power play.

But what was most impressive about the Bruins Thursday night was the consistency they showed from deep in their own zone, through the neutral zone and into the Vancouver zone. Take care of your own end and your own business in your own end, and you’re going to wind up with two points every time.

It’s been a mantra of Bruce Cassidy since he took over and it was on full display Tuesday night.

“I think that’s been a trend the last five or six games,” Cassidy told me. “I keep saying, the Pittsburgh game got away from us, but I truly believe it wasn’t a bad hockey game when you look at the tape after, in terms of how we played. We just let the lead get away, but there’s been a stretch of five or six games now, I think Vegas at home, I thought we did a good job with that.

“Pittsburgh at home, against a good offensive team, we did a good job. We’re taking a lot more value in that part of the game, and some of it is getting the balance in the lines so that they’re fresh, getting everyone involved. So, I think most of our minutes now you’ll see, our forwards are typically at the least amount is ten minutes sometimes for the lower guys if they’re not killing too many penalties, so I think that helps everyone stay in the game as well.”

The two-way hockey was a huge reason Rask was able to see everything in front and stop all 25 shots for his third shutout of the season.

“That was one of the best checking games all over the ice I remember,” Rask told me. “We took their time and space away and they didn’t have too many chances from the slot or anywhere else. So I think everyone checked well and defended well, and that turned into offense. That’s great to see, even though we won 4-0, it was a great checking game.”

In beating Winnipeg, Minnesota and Vancouver out of the break, the Bruins look like they took Bruce Cassidy’s message to heart about starting the post-All Star break fast and trying to reclaim some of that early-season momentum that saw them open with a 20-3-5.

The one nagging issue with this Bruins team has been propensity to blow multiple-goal leads and lose a numbing number of those games.

Thanks to Brad Marchand following a first wave on Jacob Markstom with 4:25 left in the second came flying down the slot and took a pass from Patrice Bergeron and put the puck into a net left vacant by a sprawling Markstrom. A 2-0 lead for the Bruins heading into the third.

Tuesday marked the 29th time they held a multiple-goal lead in a game, winning 23 of the previous 28. That may seem like a nice percentage but that conversion rate needs to be up around 100 come playoff time and they know it.

The penalty kill was solid. Yes, the Bruins only got one shot on a 60-second 5-on-3 power play in the second period. The Bruins kill on Vancouver’s third-period power play was so good they drew a Vancouver penalty to wipe out the final 61 seconds.

“We’re playing hard and playing fast,” Charlie McAvoy said. “No matter who’s in there, we know we play a responsible brand of hockey and we take a lot of pride in our D-zone, that’s player 1 through 25, everybody does. It’s always really good, get excited on the bench when you see a forward make a good play, good defensive play and there were a ton of guys who made great plays.”

Then there was Rask, stopping Brandon Sutter on a 4-on-4 break seconds later. All of that effort was reward when David Krejci put the game away with a 4-on-4 goal between the circles with just under six minutes left.

The icing on a very satisfying cake came via a Karson Kuhlman power play goal with 1:50 left on a pretty toe-drag past Markstrom.

“We weren’t as clean as maybe we’d like to be. I think (Tuesday) morning we were a little bit, I don’t know how to describe it, in a good place, in a good mood, good energy,” Cassidy said. “We just were fighting the puck a little bit, and it translated a bit tonight. We stuck with it. I think we had opportunities obviously in the second on the power play, we put them away, we did. So that’s what you’re always worried as a coach, jeez did we let them off the hook?

“But, I thought we played the right way in the third for the most part. They had a little bit of a push to start, but at the end of the day I was happy to see Marchy [Brad Marchand] get that goal. He’s had a little bit of trouble finishing lately, now that’s two games in a row he’s gone to the net. One’s been a good shot, one’s been going to the net, so hopefully he gets him back on track with that part of his game. I really liked everybody’s compete tonight, and I think we were the better team and we’re full value for the two points.”