The Celtics held the Nets to season-low scoring and 40% shooting in a wall-to-wall second half effort after overcoming an early deficit. 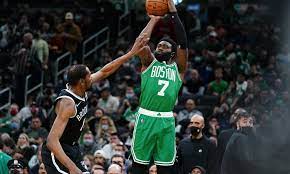 The Celtics showed their defensive tenacity that keyed the finals run from last year.

Boston’s star duo continued to cement their case as the best in the league as they compensated for their teammates, offensive deficiencies. Each scoring from all three levels, Tatum and Brown throughly outplayed Kevin Durant and Kyrie Irving.

It was not all the J’s however. The Celtics received defensive contributions from the supporting cast as they forces seven more steals and blocks than Brooklyn. Boston held the Nets to 92 points, a season low.

Encouraging signs in the context of the Jays looking crisp and the ability to tap into the defensive prowess from a season ago. Boston has now won eight consecutive outings against Brooklyn, dating back to November 24, 2021.

The Celtics will now play the second leg of a back-to-back tomorrow night in Toronto as they continue their six-game road trip.