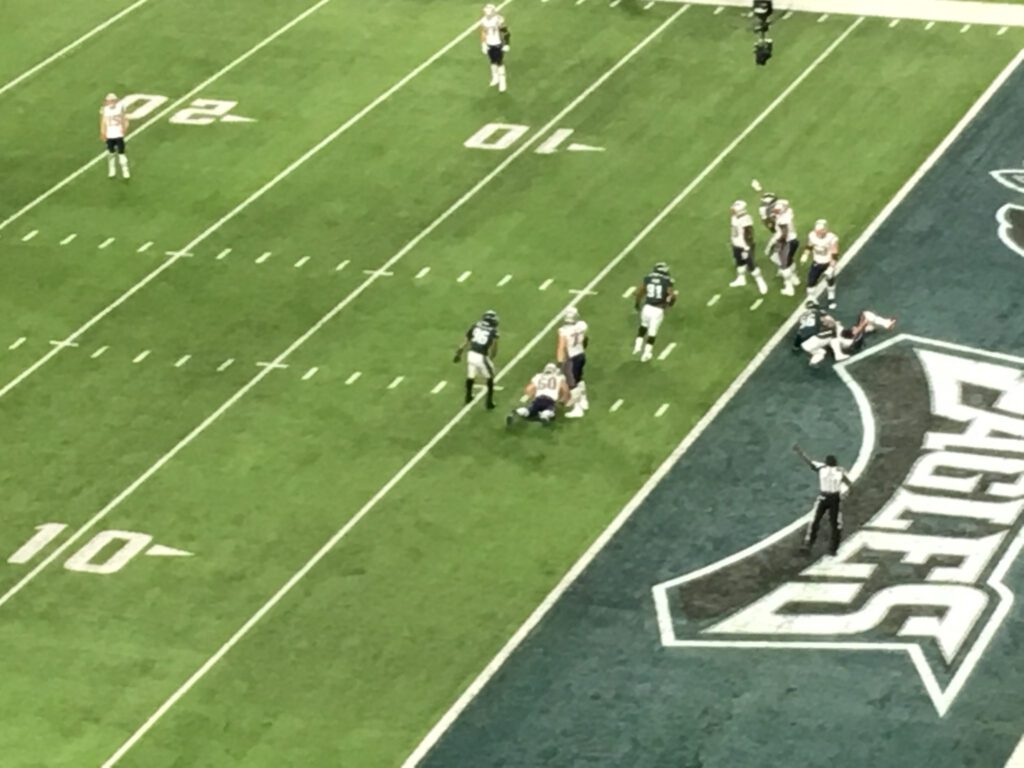 MINNEAPOLIS — This time the Patriots were the victim of a dramatic Super Bowl comeback.

In the most offensive game in Super Bowl and NFL postseason history, 67,612 watched as the Eagles captured their first Vince Lombardi trophy, 41-33. Tom Brady finished 28-of-48 with 505 yards and three touchdowns. His Hail Mary, like in Super Bowl XLVI, fell just out of the reach of Rob Gronkowski.

Jake Elliott’s 46-yard field goal after the Brady strip-sack and Derek Barnett recovery made it 41-33 Eagles with 65 seconds remaining. Brady could not march the team down the field.

The Patriots failed in their effort to join the Steelers as six-time Super Bowl winners.

The two teams combined for 1,151 yards as neither defense could sustain pressure of any kind all night.

With Malcolm Butler benched at the discretion of Bill Belichick, the Patriots had to rely on a secondary that featured Eric Rowe, Jordan Richards and Johnson Bademosi.

The Eagles realized early that the only way they had a chance to hang with the Patriots was to play hard and fast. Doug Pederson was not afraid to take the wraps off the offense, even with Nick Foles at the helm.

The Patriots made uncharacteristic mistakes and their secondary was burned. Malcolm Butler was in tears during the national anthem before remaining on the sideline and not playing as Bill Belichick went with Eric Rowe. Their defense was torched for 323 yards in the first half. Tom Brady dropped a pass on a wide open trick play pass from Danny Amendola. Nick Foles caught his on a 4th-and-2 late in the first half to give the Eagles a 22-12 half time lead.

Tom Brady hit big play after big play but paid a huge price. Chris Hogan caught first half passes of 43 and 34 yards. Danny Amendola had a catch of 50 yards and Rex Burkhead had a catch-and-run for 46 yards. The Patriots actually outgained the Eagles in the first half with 350 yards.

But the Eagles made the Patriots pay a price and no one paid a bigger one than Brandin Cooks, who was knocked out of the game with concussion on a brutal hit from Malcolm Jenkins in the first quarter.

The Patriots made a simple halftime adjustment – feed Rob Gronkowski. He caught four passes for 68 yards on the opening drive after the kickoff, including a 5-yarder over the middle for the touchdown that brought the Patriots within 22-19.

The Eagles responded again by shredding the Patriots third down defense. With 2 completions of 19 and 22 yards on third down the Eagles went back up by 10, 29-19, when Corey Clement hauled in a catch in the back of the end zone on third down. The Patriots came right back as Tom Brady hit a wide open Chris Hogan for 26 yards, making it 29-26.

The fourth quarter opened with more offense until Marquis Flowers stopped Nelson Agholor for an eight-yard loss on third down, forcing the Eagles to settle for a field goal and a 32-26 Eagles lead.

But predictably, the Patriots marched right down the field. Rob Gronkowski hauled in a four-yard touchdown with 9:22 left in the back left corner of the end zone and Gostkowski’s extra point was good to give the Patriots their first lead, 33-32.

To start the game, the Eagles called tails and it came up heads. The Patriots deferred with weather not a factor inside US Bank Stadium.

The Eagles came out and executed on two big third down chances, picking on Eric Rowe, who was starting for Malcolm Butler. The Eagles converted twice on third downs drive to the Patriots 2 on a LeGarrette Blount run. But a false start by Zach Ertz proved costly. The Eagles had to settle for a 25-yard field goal.

The Patriots took their first possession and drove down the field, using hurry-up that forced a 12-men on the field and a big play from Chris Hogan, a 28-yard pass from Brady to get momentum going. But the Patriots stalled when a pass for Rob Gronkowski was broken up in the end zone. A 26-yard field goal from Stephen Gostkowski gave the Patriots their first first-quarter points in a Super Bowl of the Bill Belichick-Tom Brady era and their first since Super Bowl XXXI when they led Green Bay, 14-10, after 1.

The wild and wooly first only got crazier the next time the Eagles gained possession. Alshon Jeffery continued the epic story of receivers making spectacular catches against the Patriots in Super Bowls. Nick Foles dropped back and lofted a perfect pass for the tall wide receiver. Jeffery went airborne over Rowe and caught the ball in the back of the end zone for a touchdown. The extra point was wide right. So began one of the most dubious first half performances in special teams in Super Bowl history.

The Patriots would reciprocate twice, with Gostkowski missing a 34-yard field goal on a bad snap and a shank off the left upright. Gostkowski would then miss badly wide left.

With the Eagles leading 15-6, James White broke off a 26-yard touchdown run.

But the Eagles converted a huge 4th down for a touchdown when Trey Burton took a handoff from Corey Clement in the direct snap and found a wide open Foles in the end zone for a 22-12 halftime lead.