The Celtics won't commit to Dennis Schröder as a starter once Jaylen Brown returns, but he could be crucial to unlocking Boston's offense. 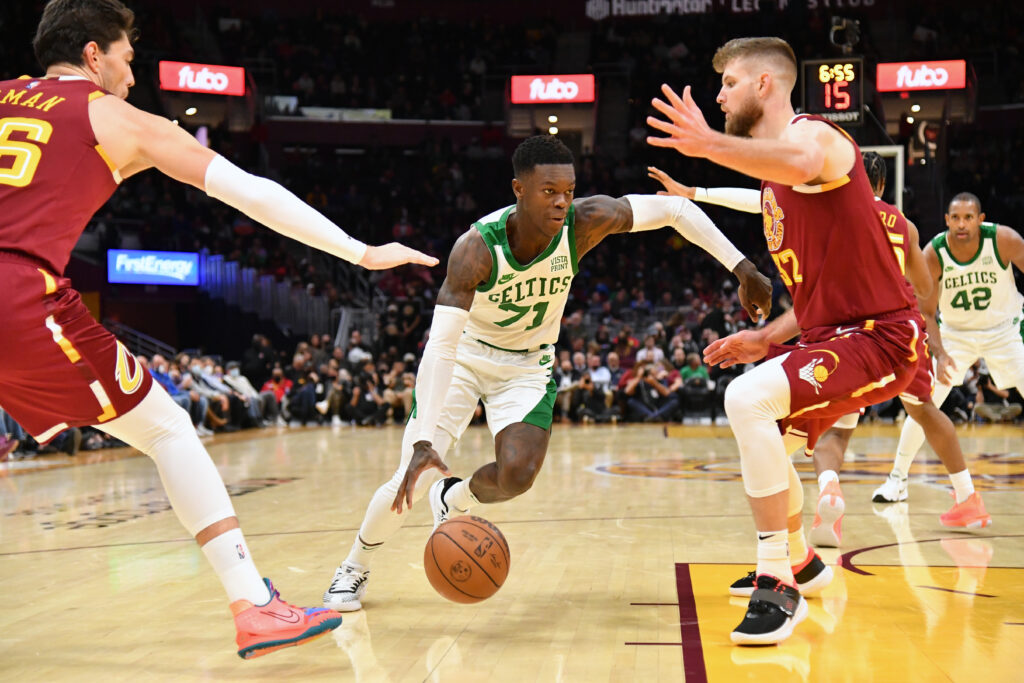 CLEVELAND, OHIO - NOVEMBER 15: Dennis Schroder #71 of the Boston Celtics drives to the basket between Cedi Osman #16 and Dean Wade #32 of the Cleveland Cavaliers during the fourth quarter at Rocket Mortgage Fieldhouse on November 15, 2021 in Cleveland, Ohio. The Celtics defeated the Cavaliers 98-92. NOTE TO USER: User expressly acknowledges and agrees that, by downloading and/or using this photograph, user is consenting to the terms and conditions of the Getty Images License Agreement. (Photo by Jason Miller/Getty Images)
Share
Facebook Twitter Email

The Dennis Schröder experience in Boston began out of necessity.

Use whatever metaphor you want. The last remaining impactful point guard on the free agent market and the team needing help most at that position found each other for one year. The result would never near perfection. If it had the potential to, Schröder would’ve received north of $84-million — elsewhere. This would simply need to work for both sides.

The Celtics’ 122-113 overtime win over Milwaukee and split of two games in Cleveland showed that it can, with Schröder becoming a starter following Jaylen Brown‘s hamstring injury. Now, after Ime Udoka told CLNS Media he expects Schröder to return to the bench when Brown returns, the team has a dilemma as it tries to alleviate the pressure on Jayson Tatum and find offensive consistency. A starting role means more Schröder, and accomplishes both of those things.

“If our offense can match our defense,” Tatum said on Monday. “We’ll be in really good shape.”

Schröder paced Boston’s offense with 38 points in an overtime win over Milwaukee, did so again in Saturday’s loss, with 28 points, and iced Monday’s win with a layup and turnaround jumper in the final seconds of the Cavaliers mini series. Since Brown’s injury, Schröder averaged 24.0 points, 4.2 rebounds and 3.8 assists per game on 51.1% shooting, shooting 34.8% mark from three and hitting all 16 free throw attempts.

The Schröder-led starting unit got outscored by 6.7 points per 100 these last five games, while Josh Richardson playing in place of Horford resulted in a +42.6 run (per 100) over 31 minutes. Marcus Smart and Schröder already built a surprising successful partnership through Al Horford and Brown’s COVID-19 absences earlier in the schedule.

Schröder playing in place of Brown with Boston’s typical starters is now the Celtics’ most-used lineup this season, allowing 96.3 points per 100 possessions (net +0.0) in 54 minutes. They’re holding the line while missing Brown, and thriving against opposing second units.

“We’ll have our original starting lineup in there,” he said. “(We’ll) put (Schröder) back in that bench role, but he’s a pseudo-sixth starter for us, a guy that finishes games, and in that role he’s very comfortable. He’s done both in his career. We like our starting lineup originally and liked the punch that him and Josh (Richardson) and some of the young guys bring off the bench.”

It’s true Schröder managed to succeed across and array of lineups. His partnership with Jayson Tatum, Robert Williams III, Smart and Brown posted a +7.8 net rating in 52 minutes so far. When Richardson replaced Horford next to Schröder, Brown, Tatum and Williams III, the Celtics beat opponents by 38.2 points per 100 possessions. Overall, a short Udoka rotation that keeps Schröder tied mostly to Boston’s starters led him to the team’s sixth-best offensive rating (103.7) and third-best defensive rating (100.3) — a net +3.4 if you don’t have a calculator.

The Celtics clearly play their best offense with Williams III on the court and a defense with Horford in. Thus, the double big lineup without Schröder posted a +8.5 rating, making it an understandable default, but a closer look shows Horford and Williams’ isolated two-man minutes rate a more modest +4.9. Smart fares better overall with the other starters than Schröder, but Schröder’s minutes rate better on offense than Horford’s. Given Boston’s challenges on that end, it may be enough of a case to start him and scrap double big. Especially if the team decides to lighten the load on Horford.

Depending on the severity of Williams’ knee injury, which knocked him out of Monday’s game at halftime after he felt a sharp pain, the Schröder starting lineups could continue to gel, which does matter. Schröder averages nearly 10 more minutes per game when starting compared to his bench role, boosting the time he’s on the floor with both Jays.

Schröder and Smart boast a +8.6 rating together, compared to +0 two-man rating for Schröder and Horford. The numbers paint a picture of a stagnant Celtics offense currently leaning on defense to win. An avenue exists toward a more prolific offense, and it includes Schröder. Boston improved to 5-3 in his starts on Monday and the guard indicated his preference toward starting early last month.

“Although we had him slotted as the backup, the plan was probably going to be him finishing games,” Udoka told CLNS last week. “So we knew (Schröder and Smart) would be out there at times, a lot, when it really counted. So now that it’s in the starting lineup it’s not much of a difference. They’re two different players, but both have toughness. We don’t feel like it’s a hindrance at all with them being smaller guards, because they’re both physical and both competitive defensively, and offensively it just gives us another guy with Dennis that can break down defenses, score for himself or get guys involved. Marcus has done that, being the initiator for the most part in the starting lineup, so it just gives us more multiple handlers. It takes the pressure off of Jayson.”

That played out on Monday, when Schröder and Smart took over the final six sets late to close out Cleveland with a two-point lead and 3:30 remaining. Smart drove and drew free throws, ran a sharp pick-and-roll that ricocheted off Horford out-of-bounds, then took an ill-advised long step-back two. Horford noted Boston’s ability to become unpredictable during that stretch post-game, a softer reflection of part of Smart’s commentary following the Chicago loss.

Schröder successfully pulled off the Horford P&R to create a layup. Then, he got his own layup off against a rising defense expecting another P&R, blowing by everyone to the rim, where he’s shooting 66.7%. His turnaround jumper at the elbow one play later sealed the game with a five-point advantage. The defense held too, Cleveland shooting 9-for-23 in the final frame, even without Williams III available for the Celtics.

Those visuals may frustrate some, Schröder pounding the rock, launching shots that sometimes seem to have no chance from the point of release and turning the ball over as many as eight times. Udoka relented Schröder gets some leeway as a scorer, even given the coach’s 0.5-second decision rule to shoot or move the ball within a moment. Schröder routinely breaks it, averaging 5.19 seconds per touch, well above the rest of the team’s 1.30-3.79 range. He has an exception.

“He is guy that can score the ball, so he obviously has some more leash than some other guys,” Udoka told CLNS. “It’s a mix. Depending on how the team is guarding, we encourage him to play fast and not hold the ball and try to survey too much where they can load up on him. But at the same time, if he finds an advantage that he likes, he’s going to obviously handle the ball a little bit more and try to get his own shot off.”

Russell Westbrook holds the ball less and only seven players who average Schröder’s minutes average more seconds per touch. Schröder and Westbrook enter Friday’s latest edition of Celtics-Lakers as necessary x-factors, sharing a frustrating tendency to take tough jumpers and turn the ball over, but it’s different when a player does those things making $5.9-million compared to $44.2-million.

That was the thinking behind the Kemba Walker trade and in many ways Schröder’s start to the season surpasses what Walker gave the Celtics last season. Schröder’s defense maintains Boston’s identity on that end, he showcases a passer’s vision and he’s made teammates better. He’s shooting 36.8% on a steady diet of mid-rangers though, with a 33% mark from deep.

The shot selection could be improved, but his 52.6% mark on open threes provides an intriguing outlet for the Jays. As Udoka said, shooting’s at a premium here. How are a few ill-advised jumpers any different from what the team rides with Smart nightly anyway?

As for the turnovers, Schröder averaging over 5.3 per game over the last four games won’t work. That needs to be cut down, especially when the live ball ones on the dribble led to easy baskets. One in crunch time at Dallas had a significant impact on the outcome of the game. That doesn’t need to be part of the the experience with more carefulness and cohesion alongside his teammates.

Despite knowing all these tendencies, Horford got on the phone the moment he heard Boston had the chance to sign Schröder, thrilled at the possibility of reuniting with his former teammate. The last few seasons didn’t go as expected for Schröder or Boston, so despite the mercenary feel to this one-year deal, the imperfect marriage feels important, the difference perhaps between a play-in tournament or full playoff berth.

Starter or not, these Celtics will need to lean in on the Schröder experience.

“I just got to be comfortable pushing the pace at the offensive end,” Schröder said. “Everybody just play free, have fun and play, I think that’s when we’re at our best and I think that’s what we did these last couple of nights … me, of course, being more aggressive, putting my teammates into spots where they can score JT, and JB when he comes back, I think is important and that’s what I try to bring every night.”