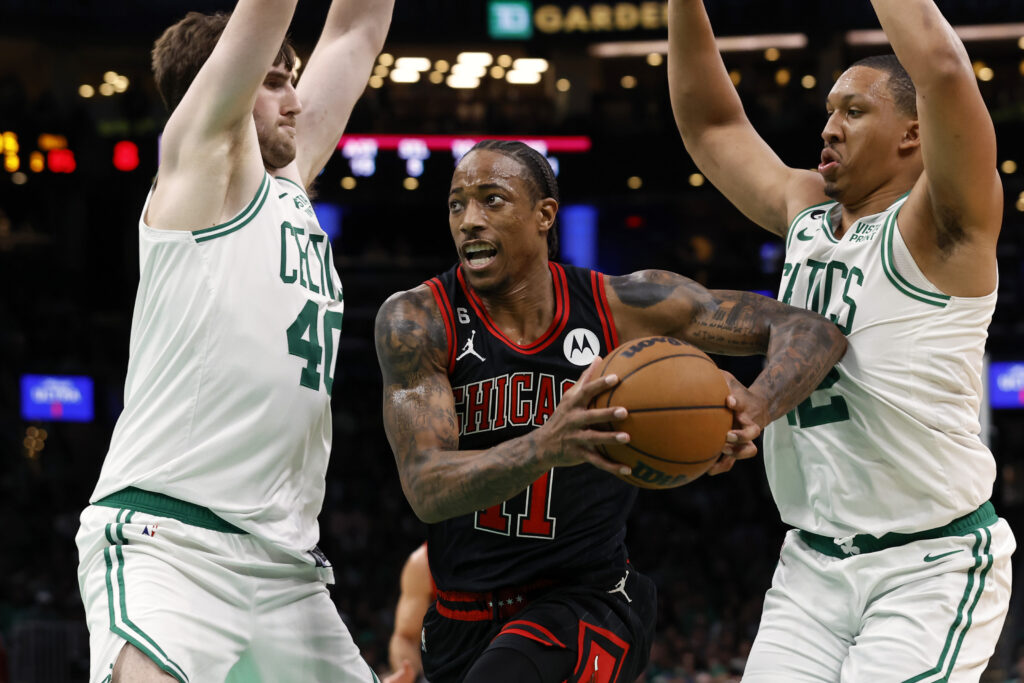 BOSTON, MA - NOVEMBER 4: DeMar DeRozan #11 of the Chicago Bulls drives between Luke Kornet #40 of the Boston Celtics and Grant Williams #12 at TD Garden on November 4, 2022 in Boston, Massachusetts. NOTE TO USER: User expressly acknowledges and agrees that, by downloading and/or using this Photograph, user is consenting to the terms and conditions of the Getty Images License Agreement. (Photo By Winslow Townson/Getty Images)
Share
Facebook Twitter Email

The Chicago Bulls halted the Celtics nine-game win streak, winning 121-107 on Monday night. DeMar DeRozan kept the home crowd into the game, making one contested jumper after another to lift his team on his way to 28 points.

The Celtics came alive early in the fourth quarter, but their rally was too little, too late. Boston opened up the final period on an 8-0 run, but Chicago answered with a Patrick Williams jumper to beat the shot clock and a Zach LaVine three-pointer. Boston never got within eight points after that push.

The Celtics entered the night forcing just 12.4 turnovers per game, the fewest in the NBA. The Celtics only forced 11 turnovers in the loss, and they lost both the battle for free throw attempts and fast break points.

Marcus Smart returned to the lineup for Boston after a two-game absence, but posted a team-low -15 (+/-) figure in 35 minutes. Jayson Tatum and Jaylen Brown combined for 53 points and eight made threes, but the team’s lackadaisical effort defensively costed them.

The final game of a road trip is always the hardest, but this was largely a lifeless effort from Boston.

The Celtics will now return home to host Luka Doncic and the Mavericks to start a six-game home stand.