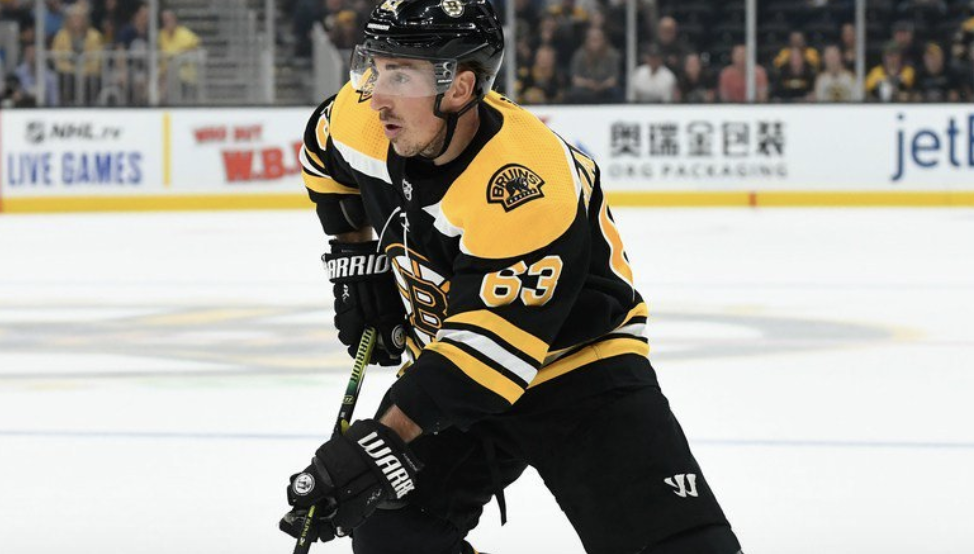 BOSTON – Brad Marchand played Saturday night like he was on a mission.

As a matter of fact, you can say that for all five games this year.

The Bruins immensely gifted left wing scored again with a nasty wrist shot from the high slot, deflecting off a Devils player in front and beating a screened Cory Schneider over the goalie’s right shoulder just 3:33 into the first period. Joakim Nordstrom added a second goal eight minutes later and it was 2-0.

“It’s a lot easier to play with the lead than it is to play from behind,” Marchand said. “We were excited to finally be at home in front of the fans and play at home.”

“Marchy is so strong on the puck in second effort that – listen, there’s certain players that are going to get more freedom, and I think our players know Marchy well enough that – we’ve talked to him,” Bruce Cassidy said after the 3-0 Bruins win over New Jersey. “When he’s got it, let’s, I don’t want to say clear out for him, but let him do his thing a little bit, because he’s good at whacking the other guy’s stick and then creating ice for himself, and then when he does, then let’s get moving. But, some of the other lines have got to be careful.

“But Marchy’s – listen, he’s just strong on the puck, and if we could build that in all of our young kids’ games, you know, we’re going to be dynamite offensively. It’s just who he is.”

That goal gave him four in five games to start the 2019-20 campaign. He leads the Bruins in goals (4) and is tied with teammate David Pastrnak in points (6).

“Well, he’s on right now. The Dallas game, there was nowhere to go but up after that one,” Cassidy said. “And he’d be the first to admit it, he didn’t play a lot of preseason. That was by design, he wanted to, he’s a competitor. But he’s found his stride now, that line seems to be clicking like we’ve seen them typically.”

But the 3-0 win over New Jersey before the home fans for the first time this regular season was about much more than just a wicked wrister from the high slot. It was about the way he skated, the way he killed penalties and the pressure he applied in front of the New Jersey net.

“I’m not really concerned about my offensive game,” Marchand said. “It’s more about being a better detailed player. I think that’s something that I can improve from last year so that’s really more what I’ve been thinking about.”

Late in the second period, the Bruins found themselves on their third power play of the night. Already with a 2-0 advantage, Boston was looking for that goal that would essentially put this one away.

Marchand skated to the lower right circle, fed the puck into traffic in front of Schneider where Jake DeBrusk was stationed. DeBrusk couldn’t control it but Patrice Bergeron came in for the simple backhand dump into the net for his first goal of the season and a 3-0 Bruins advantage.

Marchand wasn’t trying to be fancy with the puck on the power play. He was looking to make the smart play and the smart play in that instance was just throwing the puck into traffic and waiting for one of his teammates to jump on the loose change and deposit it into the net.

As much as Marchand is respected for his speed and skill with the puck, his vision is also elite.

In the third period with Zdeno Chara in the box for holding, Marchand came off the bench as part of the second penalty kill unit and chased old friend P.K. Subban behind the Devils net as New Jersey’s power play quarterback was retreating. The Bruins wound up killing all four penalties on the night.

“Well, it’s good for the crowd. I think our guys are used to it,” Cassidy said of the Marchand-Bergeron led PK. “I think what it does more is deflates the other team. If that’s our power play, and I see a team doing that, frustration sets in from the coaching staff; the players on the ice are frustrated and so I think it more demoralizes the opposition than it does to lift us up. We’ve seen them go to work, so that’s the benefit of when you’re able to kill with puck possession a penalty and do it so dominantly.”

The exciting part of Saturday night for everyone who watched No. 63 was he showed nearly every facet of his remarkably gifted repertoire of skills.

Everyone remembers how last year ended. Everyone remembers what happened at the end of the first period of Game 7 when Marchand asked off on a line change at exactly the wrong time. The result 2-on-1 Blues rush led to the second goal of the opening period and a 2-0 air-out-of-the-building advantage.

As a result, the Bruins did not get the chance to raise a seventh Stanley Cup banner Saturday in their home opener. But as a consolation, the fans did see a Bruins team led by Marchand that looks ready to make this a season of redemption. That’s the way this season has begun. Three road wins in Dallas, Arizona and Vegas before a loss in Denver to the Avalanche.

There’s nothing that can be done about the 4-1 loss in the decisive game of the 2018-19 season. Marchand knows this. All Marchand can do is play like he did Saturday night.

When Marchand skates and plays like he did Saturday, the Bruins are an elite force in the NHL. And that’s something every Bruins fan that turned out for the home opener is looking forward to for the rest of the season.