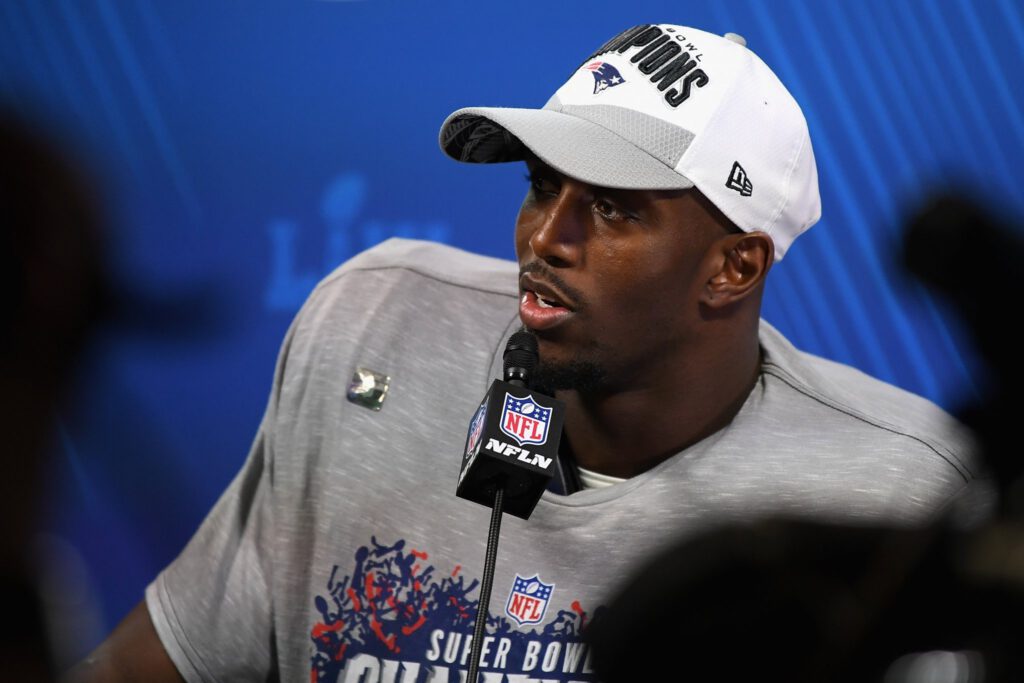 As we await Patriots tight end Rob Gronkowski’s retirement decision, the team got some good news from another veteran who will be returning for at least one more season.

Patriots safety and team captain Devin McCourty told the Sports Spectrum Podcast on Thursday that he’ll be returning to New England for his tenth season.

The 31-year-old safety is another member of a veteran group of players that was wrongfully labeled as washed up at various points last season.

And his leadership on and off the field is paramount to the success of the Patriots’ defense.

“Dev’s our leader,” said fellow safety and captain Patrick Chung earlier this year. “He’s very smart. He gets us lined up, and we feed off of him, [Dont’a] Hightower and those guys.”

“Devin is a great leader. He’s a captain and a leader of the team, leader of the defense,” Roberts said. “I asked him to help me out in coverage, and we sat down and watched film together, and we just grinded. Even on the field, I ask him small questions like, ‘do you think I should go this way or that way?’ and he helps me out from that standpoint and helps me understand it better.”

Along with Roberts, the young players in the Patriots secondary, such as JC Jackson and Keion Crossen, also spoke glowingly of McCourty’s mentoring, in many ways making him sound like another coach.

But it’s not just his leadership skills or football smarts that make him a great Patriot, it’s also his play on the field, and his role in New England’s game-plan defense.

Last season, McCourty ranked 11th among safeties with an 80.5 grade from Pro Football Focus which is considered a “high-quality starter” by their metrics.

And he did it by playing just about everywhere in the back seven for New England.

McCourty took snaps as a free safety, box safety, slot cornerback and even as a wide corner which is where his career got started as a rookie with the Patriots.

The Patriots like to morph their defense week-to-week based on their opponent, and McCourty is Bill Belichick’s chess piece in the secondary that goes wherever he’s needed.

In many ways, he’s an embodiment of New England’s entire philosophy.

“Devin’s a team-first player. Whatever you need him to do,” Belichick said. “If we need him to play three-technique, he’d go in there and play three-technique. He’d do the best he could. I don’t have any doubt about that. Devin’s as all in on the team as you could be. Whatever we’ve ever asked him to do – return kicks, cover kicks, corner, safety, play up, play deep, never batted an eye. Has just gone in there and done the best he could. You’d love to coach 53 guys like that.”

Below, we’ll go over some of McCourty 2018 tape to remind everyone of his importance to the team and that he has plenty left in the tank:

If you poll the Patriots’ locker room on the fastest player on the team, most of them will tell you not to sleep on Devin.

McCourty proved multiple times last season that he still has his top gear, and this scribe found it odd that people thought he lost a step.

In Week 1, the Texans tried to throw a tunnel screen to wide receiver DeAndre Hopkins on third down. The Patriots shut it down initially, but Hopkins hides behind his blockers and reverses field. Before Hopkins can turn upfield, however, McCourty streaks across with the Houston wideout to make the tackle.

If you need more evidence that McCourty is as fast as ever, here’s some from the Patriots’ win over the Kansas City Chiefs in Week 6.

The Patriots’ kickoff coverage units had its struggles this past season, but McCourty saved a touchdown late in the game.

McCourty’s role in kickoff coverage is to be the last line of defense. Here, Chiefs returner Tremon Smith looks like he has a touchdown, but McCourty chased him down from behind to prevent the score.

And finally, there’s McCourty’s pick-six against Buffalo where Next Gen Stats tracked him at a top speed of 22.05 MPH, making him the third-fastest ball carrier in the NFL in 2018.

On the play, McCourty and Patrick Chung baited Bills quarterback Derek Anderson into the turnover. Chung let tight end Charles Clay get a step on him while McCourty took his first step like he was widening away from Clay who was running up the seam. Once Anderson locked onto Clay, McCourty jumped the route and reached his top speed on the touchdown return that sealed the victory for New England.

McCourty’s primary role in the Patriots defense is at free safety where he can patrol the secondary to eliminate big plays.

In the AFC Championship Game, the Patriots deployed McCourty as a “ghost” on Chiefs wideout Tyreek Hill.

During big moments in the game, the Patriots made a “one double” call on Hill with McCourty and speedster Jonathan Jones primarily in coverage. This defense calls for the opposing team’s number one wide receiver, in this case, Hill, to be doubled, while everyone else is in man-to-man.

On Kyle Van Noy’s third-down sack in the first quarter, Mahomes wanted to go to Hill, but the Patriots had him doubled with McCourty lurking over the top preventing a deep throw. Mahomes was forced to hold onto the ball, and Van Noy brought him down for the sack as a result.

The Patriots will rotate McCourty between a deep safety and “rat” or “robber” position in the middle of the field depending on the situation.

But his role as the deep safety against Hill was a major reason why the Patriots defense held the Chiefs All-Pro in check.

When McCourty isn’t patrolling the deep part of the field, the Patriots will drop him down into the box in more of a strong safety role.

During their Super Bowl run, the Patriots took advantage of a veteran defense by using an “amoeba” defense and rotating in and out of cover-zero looks.

In some instances, this called for McCourty to blitz. On other plays, he’d show blitz and drop into a “robber” position as a zone defender.

Against the Chiefs in the playoffs, the Patriots saved a zero blitz for a third down play late in the game, a similar strategy to what they did in the Super Bowl two weeks later. McCourty disguises the blitz well by staying back and coming forward right before the snap and gets a free shot at Mahomes who sails the ball out bounds forcing a punt.

Fast forward to the Super Bowl, and McCourty almost had an interception by bluffing a zero blitz. The Patriots were in their “amoeba” defense with multiple players moving around before the snap, and instead of blitzing, McCourty dropped over the middle of the field. The ball was deflected at the line of scrimmage by John Simon, but McCourty would’ve picked it off if Simon didn’t bat the ball down.

McCourty was also used as a blitzer on Stephon Gilmore’s late-game interception occupying the running back which allowed safety Duron Harmon to pressure Goff into the turnover.

Lastly, the Patriots will also use McCourty at cornerback in more of matchup role depending on the opponent.

Against the Colts, McCourty was in the slot more than usual because the Indy offense frequently throws to their tight ends and running backs.

On one of the plays of the year, McCourty was in the slot working out of the Patriots’ cover-3 zone scheme. In this scheme, the slot defender is responsible for the flat. McCourty redirects the slot receiver as he releases, then covers the flat. When the ball goes to the running back, the Pats safety quite literally pries the ball from Colts running back Jordan Wilkins’ hands.

A converted cornerback, who played the position at a high level during his rookie season, Devin McCourty is one of the most versatile players on a team filled with versatility.

Patriots head coach Bill Belichick built a defense that can change its identity week-to-week, and McCourty is at the center of it all as the swiss army knife of the secondary.

Devin McCourty gave a 🔥🔥🔥 pregame speech for the @Patriots before facing the Chargerspic.twitter.com/Mt0N7UkOk7

Along with his versatility and playmaking abilities, McCourty is one of the leaders of the team and has been a team captain every year since his second season in the NFL.

Plus, he might bring back twin brother Jason, who’s a free agent, for another Super Bowl.

The Patriots will likely discuss a reworked deal with McCourty in the offseason now that he has committed to playing in 2019.

As it stands right now, he has a cap hit of $13.4 million next season.

But his value to the team is undeniable both as a leader and a playmaker in one of the league’s best secondaries.