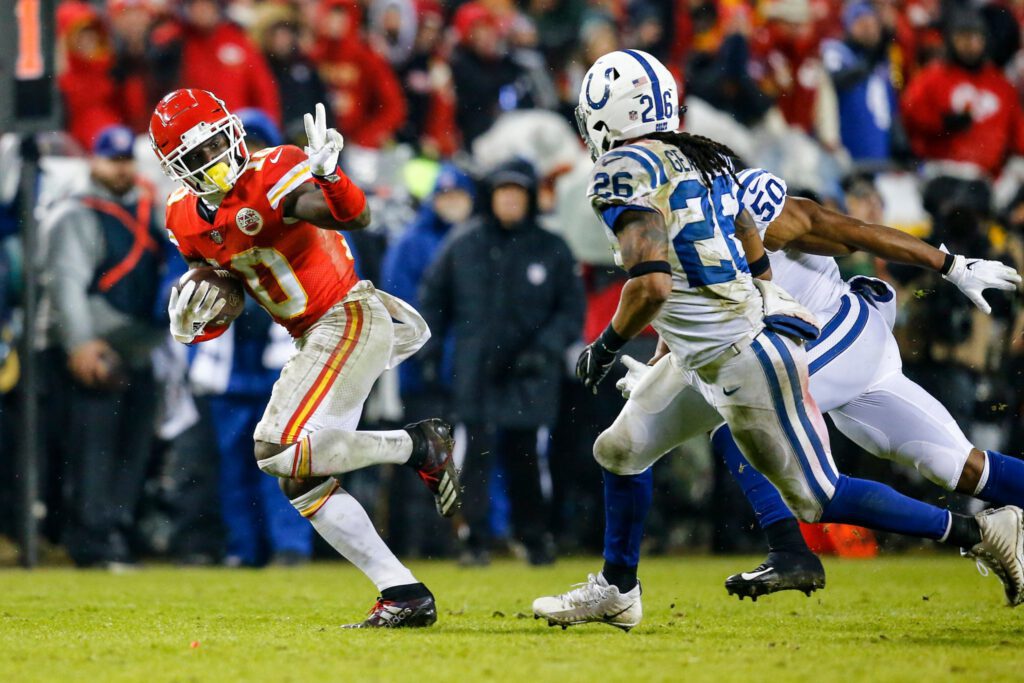 FOXBOROUGH — As Bill Belichick and Andy Reid make their final preparations, the AFC Championship Game will shift from the film room to the field at Arrowhead Stadium on Sunday.

Two of the NFL’s premier head coaches will reveal their master plans to reach the Super Bowl, but more importantly, that’s when the game becomes about execution.

For the Patriots defense, the matchup against Reid and the Chiefs offense will come down to two things; discipline and a team-oriented approach to slowing down the league’s top offense.

“When you’re dealing with Andy Reid, a great offensive mastermind, he’s going to make it hard on the defense. It’s going to be a chess match,” Patriots safety Duron Harmon told me this week.

Although we get caught up in the rosters, schematically, Patrick Mahomes pilots an offensive attack that is as much about deception as it is about the speed of Tyreek Hill or the arm of Mahomes.

To make things easier on his young quarterback, and to take advantage of his speedy skill players, Reid utilizes pre-snap motion and misdirection as much as any offense in the NFL.

“They do a great job of that. There’s, as you said, a lot of misdirection, a lot of motion and it’s fast, too. These guys are moving,” Patriots head coach Bill Belichick said. “Some of it is misdirect

ion, and some of it is they try to just get outside you fast, so you have to respect it, but at the same time, there’s plenty of misdirection or complementary plays that come off that that you also have to defend – runs and passes, inside plays and outside plays…they force everybody to kind of be in the right spot, and if you’re not, then they take advantage of it.”

“We know the Chiefs are going to stress us horizontally as much as they will vertically, especially off motion. We just need to communicate right through it and make sure no one overreacts. It’s boring, but it really is a ‘do your job’ game,” said captain Devin McCourty.

Last week against the Colts, the Chiefs’ misdirection offense was at its best, and it had the Indianapolis defense out of sorts.

Kansas City will motion players to give them the football, but as Belichick suggested, they also use those actions as window dressing to displace defenders to attack the defense elsewhere.

On this play, the Chiefs motion Tyreek Hill from one side to the other before the snap, and then he comes back in jet motion across the formation at the snap. Even though the strength of the formation doesn’t change, the strong side is still to the right where tight end Travis Kelce is aligned, the Colts defense at the second level goes into scramble mode trying to account for Hill. With the back seven out of position, the Chiefs snap the ball and run play-action with tight end Travis Kelce crossing in the opposite direction of Hill into a wide open area for a massive gain.

“That’s going to be the majority of the game,” Harmon said when asked about those types of plays.

“A lot of times, that’s in man-to-man coverage, so they’re trying to get guys to go with the motion and get guys guessing in the backfield and not looking at what they’re supposed to do,” added linebacker Dont’a Hightower.

Here’s another example from earlier in this season. This time, Reid wants to use the pre-snap motion to tell Mahomes what kind of coverage the defense is running and switch the strength of the formation. Kansas City goes from a three-receiver stack to Mahomes’ left to a bunch set to his right by motioning two players before the snap. When the motion happens, nobody runs across with the receivers, telling Mahomes that this is zone coverage. Then, they send Hill in jet motion at the snap and run a “follow” concept with the three receivers occupying the defenders downfield and Hill running a swing route into the flat. Since it’s zone, Mahomes stares down the middle of the field to hold the defense and then drops it off to Hill who makes a defender miss and gains nine yards. If this was man coverage, Mahomes has a backside slant to tight end Travis Kelce that would be his first read.

The 49ers defense played the motion and route concept well, but the Chiefs still picked up a first down because of Hill’s elusiveness in the open field.

And when the Chiefs lull you to sleep with dummy sweeps and motions, they’ll hand it off to the electric Hill.

Watch the Colts defense run into each other at the second level here and get caught looking in different directions.

What these two examples show you more than anything is that this is the ultimate “do your job” kind of game for the Patriots defense.

“What you said last is the key part; playing your assignment,” cornerback Jason McCourty said. “There’s going to be things where someone is responsible for that motion; it’s just making sure you’re playing that. If you aren’t responsible for that motion, make sure you’re keeping your eyes where they are supposed to be, and you’re playing your responsibility.”

“It just comes down to fundamentals, just doing your job,” Hightower explained.

The Colts defense gave the Patriots a good blueprint of what not to do against the Chiefs on Sunday, and it started with the fact that the Indianapolis players weren’t on the same page.

For the Patriots, that’s where Hightower excels with his ability to make adjustments on the fly to get New England in the right defense.

“Tyreek Hill or Chris Conley or Kelce, those are big players who can change a coverage or change a front or something. So, communication is going to be big. That’s something that we’ve done well the last couple of weeks, so hopefully we’ll continue to build on that,” he told me.

If New England wants to win and advance to the Super Bowl, the Patriots defense can’t try to out-athlete the Chiefs offense; that’s a losing proposition.

Instead, they have to focus on playing their assignment and communication because the Chiefs offense by design will try to make both of those things very difficult.