Doc Rivers on Paul Pierce: ‘This is a day we actually talked about before we won the title’ 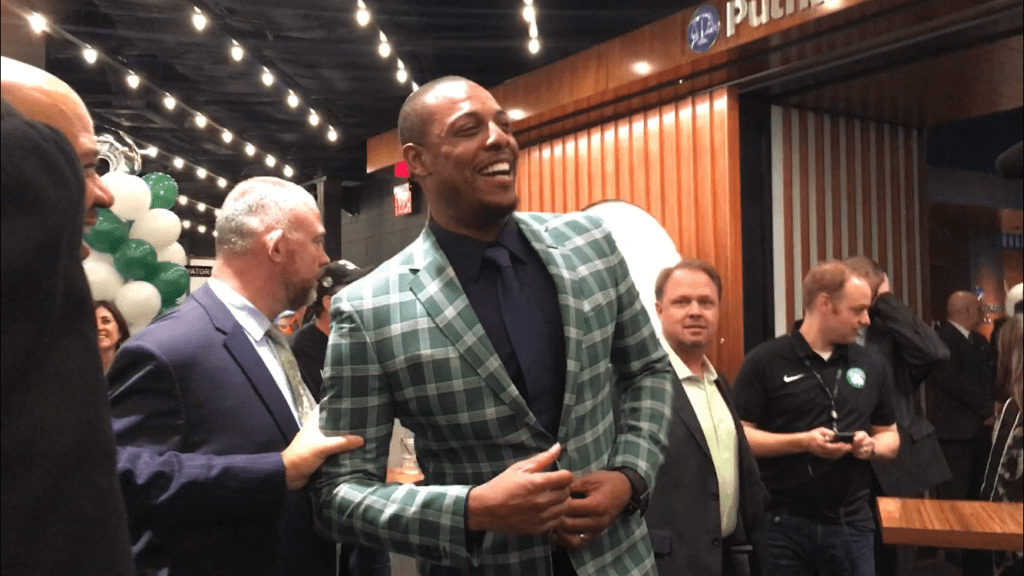 With his team in between road games in Philadelphia (Saturday) and Brooklyn (Monday), the Clippers head coach made it back to TD Garden for the electric atmosphere around the raising of Paul Pierce’s No. 34 to the rafters.

Joining Rivers under the Cavaliers basket Sunday were Rajon Rondo (seated next to Rivers) and Kevin Garnett. All three were shown on the video board in the first half and then Pierce was shown appreciating their presence. The crowd reaction was louder and louder with each camera shot.

All of this must have reinforced to Rivers why it was such a great idea to take time out and share in the moment.

“I love the guy,” Rivers said. “Listen, I got a ring and I wanted more because Paul, Kevin (Garnett), Ray (Allen), (Rajon) Rondo that whole group. I think Bill Parcells said it best, when you win something with someone it’s a blood transfusion and you’re connected for life. Paul and I talk a lot, stay in contact a lot and so do all of us. This is a day that we actually talked about before we won the title. This is literally a day we talked about, as far as a whole team, that was going to happen and we all said we’d be there.”

Will Garnett be next?

“I hope so,” Rivers said. “He’s a tough one, he definitely should be, but he should be in Minnesota too. That will be the funniest one because he won’t want to be there (laughs). You know, knowing Kevin he’ll love the honor, but the attention and Kevin don’t go together. That would be very interesting. I would really enjoy that.”

What Rivers really appreciated were all the intangibles that led to one NBA title in 2008 and a near-miss in ’10.

“I think what people for get about Paul is that he moved over to win,” Rivers told me. “A lot of players, and I say it all the time, say they want to win and all that stuff and then they do until they have to give up part of their day. Paul was the happiest out of everybody. When we got Kevin and Ray he wanted to move over, he wanted to give room and to me that’s the intangibles that I see with Paul.

How much did the Championship cement the legacy?

“I just think it always cements it,” Rivers said. “When you win a title you become a main man and that made Paul. He would have had this night regardless of winning the title, but winning the title makes this day pretty special. As the Celtics do, I think it was very clever who they chose to play and do the retirement on. For me, I’m going to have a ball. I’ve never been to a NBA game in 30 years where I was sitting in the crowd. I’m going to have a beer, I’m going to yell at the refs all game, and I made even boo a couple times. It’s going to be an absolute wonderful ball.

“He raised his game during the Finals, he raised his game in Game 7 against Cleveland. LeBron had a hell of a game, but Paul Pierce was amazing in that game. You think about that whole run in those big games, the game in Detroit where we clinched that, the game where we came back in LA, that was Paul Pierce at his best. He was just confident. I think when you play as much as he played and if you were telling all the young guys now doing all the training and stuff, Paul Pierce just played basketball. Maybe we should all do that a little bit more.

“He made a lot of big shots, but again he kind of knew where he wanted it, he was so confident. Him and Larry (Bird) in that way were very similar. Larry at the end of the games, I played in that frame with Larry I don’t know what he had but it felt like he had 1,000 in Game 7 against us in Atlanta. Larry just felt like he knew where he was going, you knew where he was going and he kept scoring and that was Paul. You heard guys every night, you’re not going to your right on the right elbow and Paul would be like we’ll see and that where he ended up.”

Being a part of the organization, Rivers knew what he was leaving when he left after the 2012-13 season.

“I knew already. When I decided to go I knew what I was leaving and I said it actually I’ll never have anything like this, because you don’t, you don’t have it,” Rivers said. “You appreciate it even more when you’re away, but I knew it before I left. You leave this organization you know you’re leaving something special. The fanbase, the whole thing, all of you guys (media), I mean are you kidding me. You don’t get that anywhere in basketball, maybe in some other sports they have this, but this is different. It’s always been different and that’s what makes it special and you have to be a part of it to understand it.

“I thought it was time for me. I had a nine-year run and I just really believe you have your time, I’m just a believer in that. Do I miss it yea, I’ve always missed it. I’ve missed it from the day I left I missed it. Again, you don’t get this.”

Rivers will be back in Boston on Wednesday when his Clippers play the Celtics in the last game before the All-Star break.

“Yeah the preview for Wednesday – all I know is that the last time we played before All-Star break both teams decided no defense, if you remember that game. I think it was like 150 and we were number one and two in the league on defense. Let’s hope that happens again it will be fun.”