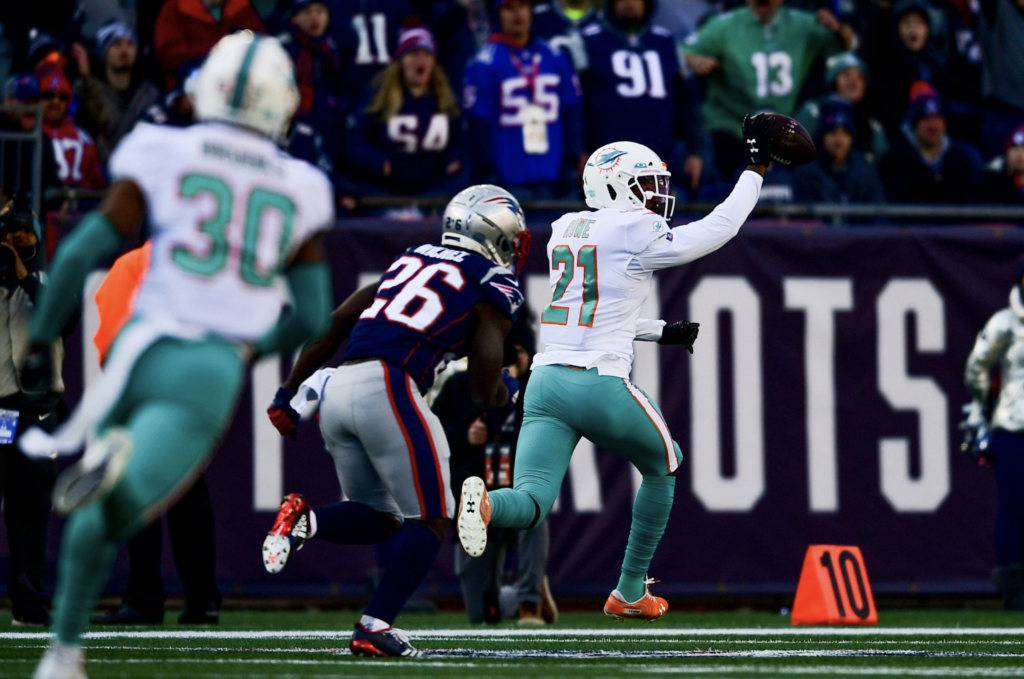 FOXBORO — This was not the way the Patriots were supposed to head into the playoffs.

The AFC East champs played most of Sunday’s game in a fog and it finally caught up with them when Ryan Fitzpatrick connected with tight end Mike Gesicki in the back of the end zone with 24 seconds left to lift Miami to a 27-24 win over the Patriots at a stunned Gillette Stadium. The Dolphins went 75 yards in 13 plays in three and a half minutes to complete the shocking comeback from a 24-20 New England advantage.

As a result of Kansas City’s win over the Chargers, the Patriots will be playing on the first weekend of the playoffs for the first time since 2009.

James White had caught a 13-yard short pass and followed a path cleared by Shaq Mason into the end zone with 3:53 left in the fourth quarter for the go-ahead score.

The Dolphins did a good job of playing keep away in the first quarter, controlling time of possession for over 11 minutes while the Patriots had the ball just twice, including a 3-and-out.

Miami jumped on the board first when they put together a 12-play, 80-yard drive, consuming nearly seven minutes. The Dolphins started at their own 11 but showed no fear as Fitzpatrick lobbed a perfect 28-yard pass to DeVante Parker down the left sideline, beating Stephon Gilmore. The Dolphins took a 3-0 on Jason Sanders’ 27-yard field goal with 1:42 left in the first quarter.

As good as Brady was against the Bills a week earlier, he looked shaky for a good portion of the first half Sunday.

On second and 10 from his own 31, he lofted a pass out in the right flat, with Sony Michel underneath and Julian Edelman out wide. Eric Rowe, with coverage on Edelman, peeled off and undercut the poor throw and ran it back easily for a pick-6 that stunned the Patriots crowd at Gillette and made it 10-0 Miami.

The Patriots appeared to be headed for a cliff when Nate Brooks was called for pass interference when he grabbed Phillip Dorsett’s helmet on a third down Brady pass that was well overthrown. From there, Brady and the Patriots put together a 12-play, 68-yard drive that was capped by a 25-yard Nick Folk field goal.

The Patriots tied it on their next possession. Sony Michel ran it up the middle from four yards, with Elandon Roberts throwing a big block on Rowe to clear Michel’s path into the end zone.

The Patriots did get the ball back but the Patriots decided to sit on the ball from their own 25, a move that received a smattering of boos from the frustrated crowd as the team when to the locker room tied, 10-10.

The Patriots received the ball to open the second half but could do nothing with it. The Dolphins, on the other hand, marched right down the field against the previous staunch New England defense. Using a double pass, that featured receiver Albert Wilson passing to a wide open Patrick Laird for 21 yards. Fitzpatrick finished off the drive with a 2-yard keeper into the end zone for a 17-10 Miami lead that silenced the Gillette crowd with 7:48 left in the third.

Brady and the Patriots offense returned the favor using razzle-dazzle of their own, as Brady hit a wide-open Elandon Roberts in the right flat. Roberts made a nice adjustment on the ball and then ran through an arm tackle, making his way down the right side line and into the end zone for a 38-yard score that tied the game, 17-17.

The Patriots had the ball and appeared to have converted a big third-and-11 from their own 25 on a pass to James White out of the backfield but the first down was negated when the Patriots were flagged for an illegal shift. The Patriots were eventually forced to punt.

The Dolphins used the ensuing possession to march down the field and take a 20-17 lead with 8:29 left when Jason Sanders connected from 32 yards.

Shaq Mason threw a monster block on Miami safety Walt Aikens down near the Miami 5 that freed up James White for a 13-yard TD reception that put the Patriots up, 24-20, with 3:53 left.