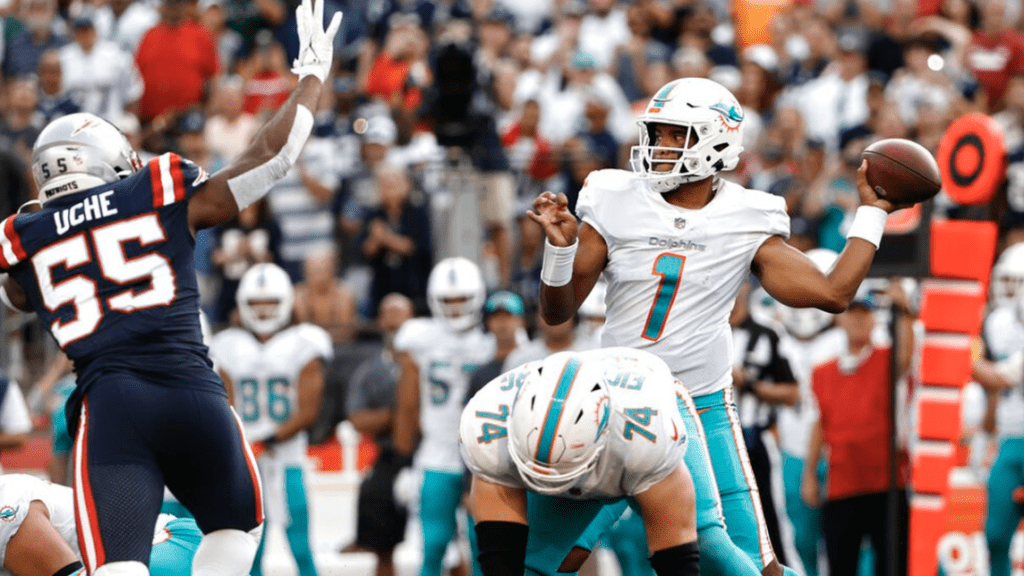 FOXBORO, MA — The Patriots fell to quarterback Tua Tagovailoa and the Miami Dolphins in Sunday’s season-opener at Gillette Stadium.

Although the Patriots defense held Tagovailoa to just 202 passing yards, Miami’s offense was particularly productive on run-pass option plays (RPOs) in Sunday’s 17-16 victory for the Dolphins.

According to Pro Football Focus, Tagovailoa was six-for-ten for 70 of his 202 yards on RPOs. Speaking after the game, Pats cornerback Jonathan Jones and J.C. Jacksons shed some light on New England’s struggles with defending RPO concepts in Sunday’s loss.

Jones credited the Dolphins for a good game plan by giving Tua the option to throw the ball quickly. Jackson said the plan for the Pats defense was to mix up their coverages, playing both off the line and in press coverage, to give Tagovailoa different looks.

“I think it was a good plan by them. They had a couple little passes where they saw us in a certain coverage. They might have a run play on, but they just picked the ball up and threw it. Good coaching and good plays by them,” Jones said.

Miami’s opening touchdown drive got off to a quick start when Tagovailoa hit first-rounder Jaylen Waddle for a 17-yard gain on the Dolphins’ first offensive play of the game.

In the play, J.C. Jackson plays off-coverage against Waddle while Miami has a guard-tight end counter play designed for the running back. When Tua sees Jackson is off the line, he opts for the pass option on a snag route to Waddle, and the speedy wideout is off to the races.

Later on, the Dolphins iced the game by getting off their goal line on a 13-yard gain to DeVante Parker. After a penalty on the offense, it’s 1st-and-14, but Tua recognizes Jalen Mills bailing at the line of scrimmage, which gives Parker space underneath. Miami has a similar G/TE counter as a run-option for Tagovailoa, but Tua takes the easy completion to Parker.

Although Tagovailoa isn’t overly dangerous with his legs, his quick decisions on RPOs burned the Patriots in Sunday’s loss to Miami.