The Celtics are erasing their offensive woes in the 4th quarter with the best defense in the NBA. 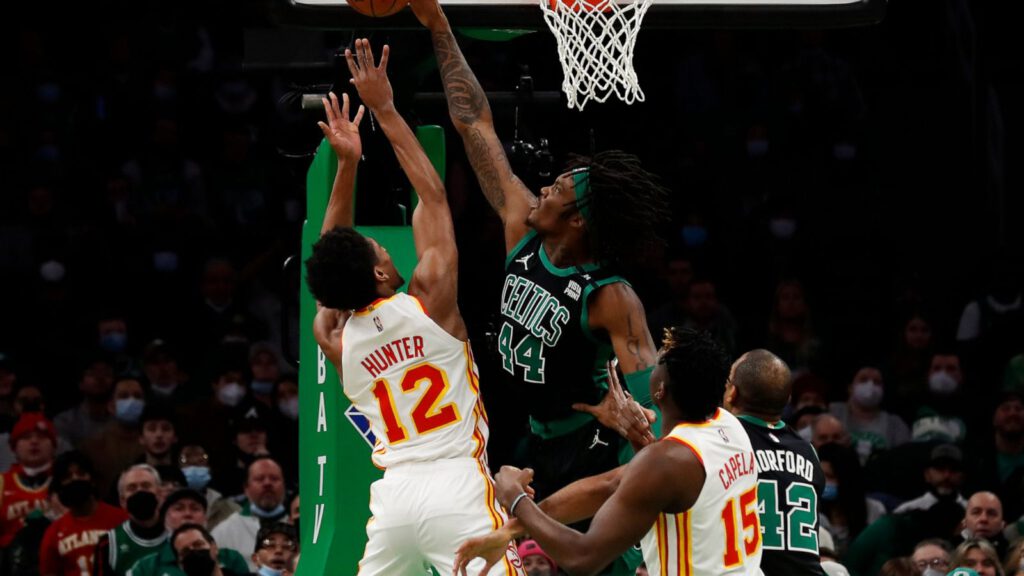 BOSTON — Jayson Tatum dribbled off his foot and Jaylen Brown wildly dove into traffic and lost the ball charging toward the rim. The early portion of the fourth quarter between the Celtics and Hawks on Sunday had all the makings of a patented 2021 Celtics fourth-quarter collapse.

Brown launched another long jumper, missing Derrick White cutting to the basket. Tatum couldn’t get one over Onyeka Okongwu.

Robert Williams III launched two passes away as part of a five-turnover afternoon.

Yet when Trae Young tried to attack Tatum on switches, he found nowhere to go. He got lost deep underneath the basket and fired a pass off Danillo Gallinari’s legs out-of-bounds in the corner. Young forced another pass in Marcus Smart’s direction in the final moments.

Tatum blocked Bogdan Bogdanovic at the three-point line. When the dust settled, Atlanta only mustered 17 points in the fourth quarter. The Celtics never got on their feet offensively either, but put-backs by Smart and Williams III produced 18 points for Boston, just enough to carve out a 105-95 win over the Hawks.

Sunday’s game progressed almost exactly as Friday’s did against Nikola Jokic — one of the leading MVP candidates — and the Nuggets. Boston trailed by nine points at half on Friday, then 10 on Sunday. Both games featured rapid-fire Celtics turnarounds in the third quarter, while the Nuggets and Hawks, who each averaged over 116 points per game over their last 15 game entering Boston, could only muster 41 and 40 respectively in their second half in TD Garden.

“They just outworked us on the glass. Al Horford gets four, Robert Williams III gets six (offensive rebounds) … everybody,” Nuggets head coach Michael Malone said. “They just wanted it more. The turnovers continued and we just struggled to make shots … Robert Williams is long, he’s athletic, he’s a good defensive player … they’re a solid defensive team … this is a much different animal than the teams we’ve played lately.”

The Celtics’ defense is now seemingly impenetrable when they court Derrick White alongside Smart, Tatum, Brown and Williams III late in games. That lineup allowed 76.7 points per 100 possession in their first 15 minutes together, closing games over the weekend. Young, and the advantages on switches against Williams III he built early, disappeared late. Jokic, who reached a triple-double in three quarters on Friday, turned the ball over nine times and, Malone noted, ran out of gas late.

In today’s era of advantage-based offense, the Celtics don’t have any defender you can find mismatches against throughout their seven-man rotation. That showed in Gallinari’s dreadful spot start for John Collins, trying and failing to heave jumpers over Boston’s guards on his way to a 2-for-8 game. The team still needs to integrate Daniel Theis, which Udoka expects to happen slowly, and it’s unclear what depth will be in place should anyone on this thin roster gets banged up. Is full health necessary to receive the sum of this defense?

Since Smart’s return in Washington on Jan. 23 got them there, it’s been silly season for the Celtics’ defense, which has posted a 94.9 defensive rating over 11 games that’s 10.6 points per 100 possessions better than the No. 2 defense over that stretch, Oklahoma City (105.5).

A softer schedule helped too, but they’ve won in spite of horrid three-point shooting (28% since the deadline) and the defense’s ability to make their offensive lulls negligible late in games was eye-opening over the weekend. The Celtics’ mistakes in those fourth quarters against the Nuggets and Hawks would’ve lost them those games one month ago. Boston became so elite on the defensive end this past month that powerful offenses in Denver and Atlanta couldn’t take advantage of those miscues.

The Celtics rank fourth in fourth-quarter net rating (+9.8) on this recent 10-1 stretch, despite a 23rd-ranked offense in those spots. They’re turning the ball over on nearly 16% of their possessions in fourth quarters. Only the Knicks have shot worse to close games (46.8 eFG%) and the stagnancy remains, the Celtics posting a 24th-ranked assist percentage (54.6%) recently. It hasn’t mattered.

Boston either knocked opponents completely out of games early, like they did with an unprecedented 28-2 start in Brooklyn, or have took advantage of lethal Tatum quarters, like his third against Atlanta on Sunday. Once De’Andre Hunter went down with four fouls in the opening minutes after halftime, Tatum ripped off 6-of-9 shooting in the frame while the Celtics score on 10-of-11 possessions at one point. Tatum finished the frame dunking over Okongwu’s head, twice scoring through the young rim protector after he gave Tatum fits in Atlanta last month.

Tatum’s now shooting 49.2% from the field over his last 11 games, barreling downhill nonstop to draw over five free throws per game on his way to 27.6 PPG. He’s also averaging 5.4 APG to 2.4 TO/G, launching beautiful skip passes throughout Sunday’s win and going unrewarded in another game where Boston shot under 30% from deep.

The team’s changing its shot profile, embracing second-level drives through White, while Tatum embraces a faster pace for the offense. Tatum’s been as jovial as we’ve seen him in two seasons, interrupting White’s post-game walk off interview with a quip about his new teammate’s light skin, launching off his bike resting spot to the scorer’s table as the lead dwindled early in the fourth quarter and hosting post-win lifting sessions.

Tatum’s locking in on defense, and the boards, and his ball movement — and started talking about winning a championship with the Celtics post-game on Sunday. Winning cured all, with Ime Udoka and Brad Stevens going all-in on defense ushering in this recent consistency.

“We’re just clicking … everybody would’ve liked for us to just play like this out the gate. We made efforts, but the reality is things take time. Obviously, there was a lot of losses where we wish we could have back and things we wish we could change. We were all just adjusting something new. A whole new coaching staff, kind of a new brand of basketball. I’ve been doing this my fifth year now, and you realize there are certain parts of the season that are better than others,” Tatum said Sunday. “I’mma tell y’all I told you so when we win a championship one day … anything less than that is just the process of getting there.”

Defense, unlike shooting, can give a team a floor nightly without fail. Boston’s has been so good that all their deficiencies, which shined bright over the last two games, couldn’t overcome how well they played in their own end. Williams III sent away a bold Lou Williams late, as well as numerous other Hawks who crashed into his are under the basket.

The Celtics probably can’t win a championship with the offense they are courting, they’ll try to find shooting in the buyout market. They’ve put themselves back in the conversation among the best in the east when they seemingly had no path to landing there earlier this year. There’s a good energy around this group again that fans bought into at the arena, thanks to a defense that’s now catching national attention from some of the smartest analysts around the game. And Brown and Tatum haven’t hit their strides.

In a marked contrast from the boos that flooded the arena in 2021, the fans at TD Garden gave the Celtics a standing ovation as they walked off the court Sunday afternoon.

“We started playing harder, more consistently for sure,” Udoka said Sunday. “It was just lulls, at times, and you’ve got to understand guys being in and out affects that, chemistry, new staff, new voice, new schemes, coverages. Everything affects that. So I understood the big picture, that we could get to where we are, it’s going to take some time, and me holding them accountable, but them doing it as well. They’ve bought in on the defensive side of the ball, effort-wise. Offensively, sharing it, you’ve seen the difference. It just takes little time, it’s not going to happen overnight, and I understand that. Once they all buy in, and I’ve said, they’ve all been receptive to coaching and criticism and challenging them. I love the group for that.”