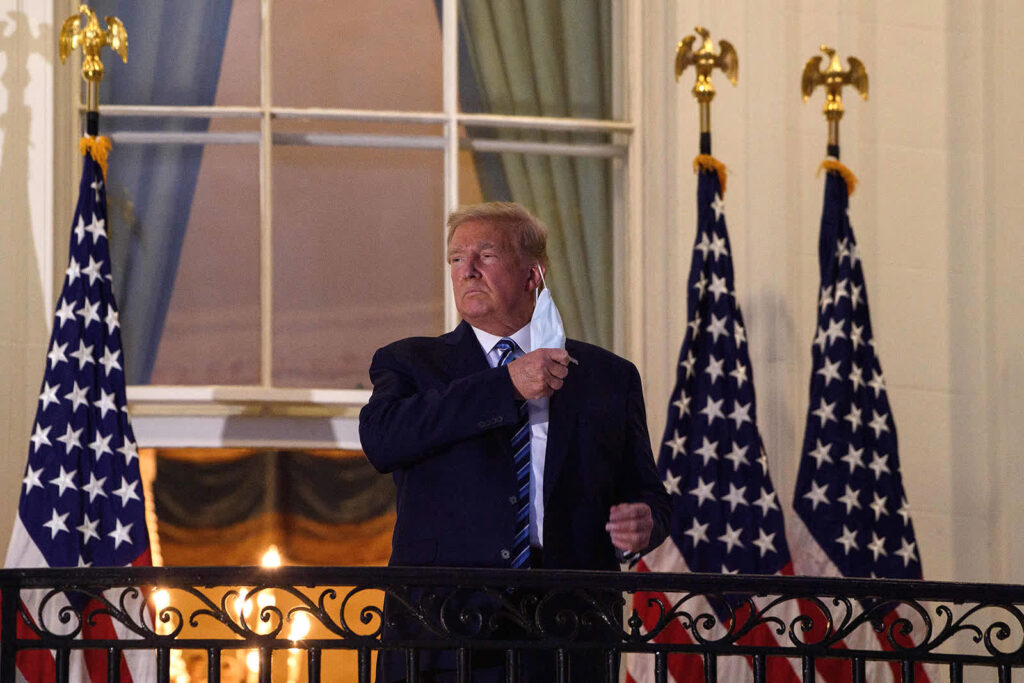 President Donald Trump has had it.  COVID-19 that is.  And if he and Chris Christie and his robust immune system can recover, well then so can you.  The President tweeted yesterday, “Feeling really good! Don’t be afraid of Covid. Don’t let it dominate your life. We have developed, under the Trump administration, some really great drugs & knowledge.”

It’s pretty clear what Trump’s strategy is on the home stretch with the general election less than a month away: COVID-19 is NBD.  It’s time for us all to get on with our lives and accept that the pathogen is now a part of our environment the same way other viral and bacterial strains are.  That if you want your lives to go back to where they were in January 2020, you better vote for him.

Oddly enough, this messaging could have been effective had it been done much earlier.  Dave Portnoy seemed to put it on a tee for his favorite president.

But that was before the gassing of peaceful protestors.  Before the stalling of dire needed relief packages in Congress while half the country goes belly-up.

At the bare minimum, it would have allowed for a much needed national conversation on whether or not the response was disproportionate to the threat of the virus.  But in regards to Trump himself, his campaign messaging has been far too erratic for him to effectively entrench himself over the course of the spring, summer and now fall as the man who’ll save your favorite mom and pop shop.  Rolling this anti-lockdown message out now appears as a desperate roll of the dice.  Trump has seen a minor increase in his betting odds over the last few days, now a +145 underdog according to BetOnline.ag, but it does appear that he’s now operating under the mindset that he’s already lost this election.

The only thing that it will do is shape the GOP as the anti-lockdown, anti-bureaucrat party in the decade to come.  Make no mistake: The pandemic isn’t going anywhere, and January 2020 is never coming back.  The new normal is upon us, and there will be many in the country that won’t accept the final erosion of American civil liberties.  Future Republican strongmen will use this reality to their advantage the same way Trump galvanized his band of misfits with fears of a refugee invasion.  And as the coming depression tears apart the lives of millions of Americans, many will be even more susceptible to extremism and demagoguery.

To quote the father of the modern-day Republican party, “Extremism in the defense of liberty is no vice.”

If you thought The Donald was bad, wait till the next one.