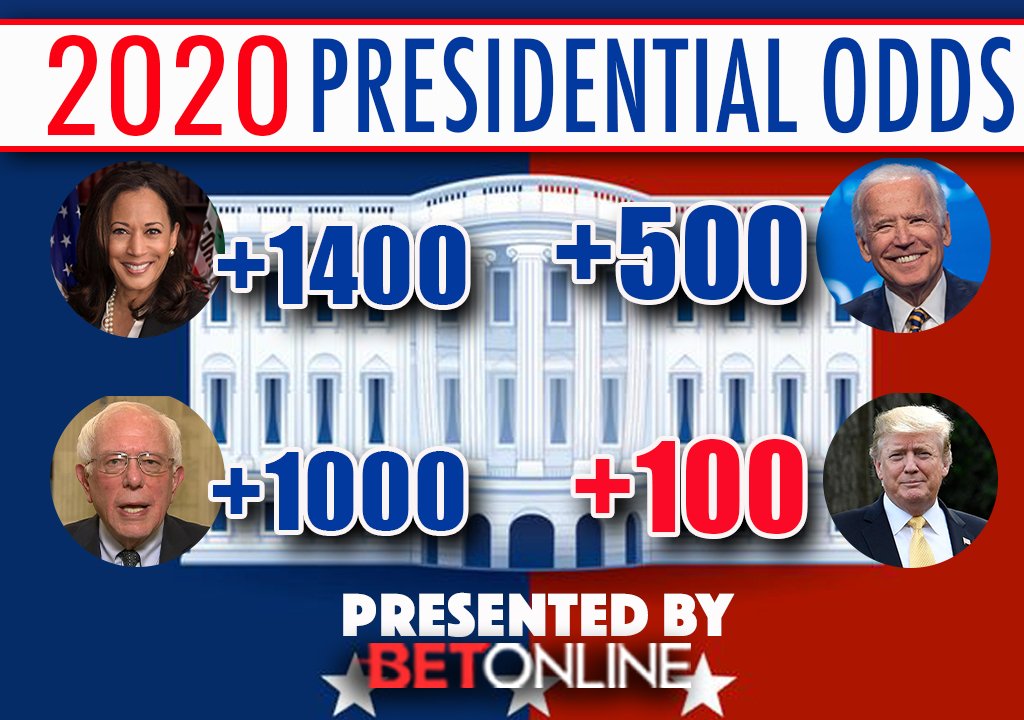 Donald Trump is the overwhelming favorite to win the 2020 United States Presidential election.  Such is according to one of the most prominent betting platform in the world — BetOnline.AG.

Is Bernie worth the underdog bet? ?

Trump comes in at even money, +100, to secure a second term as President.  Popular challenger Bernie Sanders comes in at a, surprising to some, 10-1 underdog.

Despite The Donald’s rather vociferous unpopularity in many noted regions, the status as heavy favorite is predominantly due to the continued GDP growth since taking office as well as being cleared of charges of collusion with the Russian government during the 2016 campaign.  Many other policy analysts also point to Trump, thus far, adhering to one of his campaign promises of ‘no new wars.’

But for those interested in making money via betting on the race, it bears asking: Is this Peak Trump? Could bettors get a better price from now until the election in November 2020 by placing a potentially wise wager on one of Trump’s many challengers?

In regards to the economy, former Ronald Reagan Budget Director David Stockman told CLNS Media that the good times won’t last with the US economy.  That this is the longest business cycle since the inception of the Federal Reserve system way back in 1913, and that once the bubble bursts, that Donald Trump will inevitably pay the price.  Could a recession hold off until after the 2020 election? According to Stockman, that’s doubtful.

Another point is that while Trump has not extended US military operations since taking office, the US seems on the cusp of two new major conflicts in different hemispheres — Venezuela and Iran, both of which have been longtime thorns for many of those who make up Trump’s immediate foreign policy circle.

War with Iran would likely be infinitely worse than the damaging operations in Vietnam during the 1960s and Iraq in 2003.

Already, many foreign policy experts and military historians have come out to express that war with Iran could very likely precipitate a global conflict that could thus bring a painful end to American global hegemony.  Analysts are drawing up comparisons to the Athenians dismal defeat in Sicily and Napoleon’s botched retreat from Moscow in terms of the worst military blunders in the history of civilization.

If that were to be the case, Trump would be un-electable in 2020, the same way Lyndon B. Johnson refused to run in 1968 as the war in Vietnam became violently unpopular.

Will Trump hold the line for the next 15 months? Or will a colossal world event either domestically or around the globe, (or both!), lead to the Democrats regaining the White House?

One could utilize their knowledge by winning big at BetOnline.AG  Use code CLNS50 to get a 50% cashback bonus.