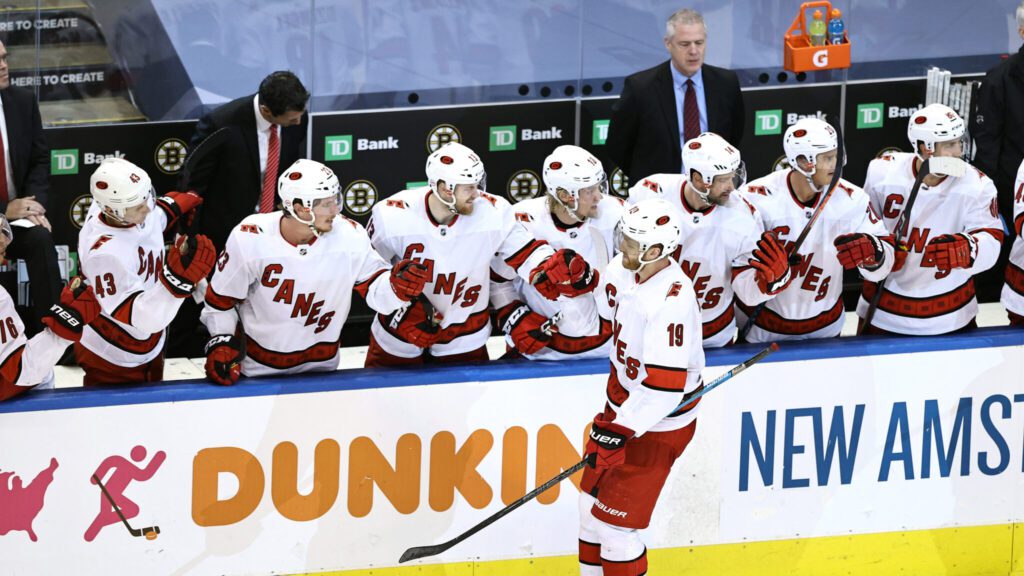 TORONTO, ONTARIO - AUGUST 13: Dougie Hamilton #19 of the Carolina Hurricanes is congratulated by his teammates after scoring a goal against the Boston Bruins during the third period in Game Two of the Eastern Conference First Round during the 2020 NHL Stanley Cup Playoffs at Scotiabank Arena on August 13, 2020 in Toronto, Ontario. (Photo by Elsa/Getty Images)
Share
Facebook Twitter Email

Coming off a double overtime loss the Carolina Hurricanes responded, beating the Boston Bruins 3-2 on Thursday to tie their first-round playoff series at a game apiece.

A 2-2 tie was broken in the third period via the stick of Dougie Hamilton who fired a laser over the shoulders of Boston goaltender Tuukka Rask. A late push for an equalizer by Boston was unsuccessful as the Hurricanes held on to the 3-2 score line to the final whistle.

The Hurricanes had nearly taken the lead earlier in the period when a loose puck was potted in the back of the net only to immediately get waved off. An unsuccessful Carolina challenge gave Boston a power play they were unable to capitalize on.

After the Bruins power play had been a weakness in the round robin and all of Game 1, it was the power play unit—sans David Pastrnak who missed the game with the ‘unfit to play’ designation—that gave the Bruins a shot at all.

Boston opened the scoring with a David Krejci power play goal with 4:18 left in the first. The goal was answered by Andrei Svechnikov in the second frame. The Bruins power play broke the 1-1 tie with just a few ticks left in the second period, again on the power play—this time a Brad Marchand lamplighter.

Facing off against his former team, Dougie Hamilton showed the Bruins what they were missing with his third-period goal on Thursday night.

Dougie Hamilton with a rocket of a goal against his former team just under halfway through the third to give the Canes the lead.

With the puck just above the right faceoff circle, Hamilton unloaded a slapshot that left Tuukka Rask looking helpless as the puck buried itself in the back of the net with just 11:30 left in the game.

Not only was the goal against Hamilton’s former employer in the Bruins, it also proved to be the difference-maker, giving the Hurricanes their ultimate 3-2 advantage in a much-needed Game 2 victory to tie the series at one.

‘You just feed off of that’: What Patrice Bergeron’s Four-Goal Night Means for Bruins Offense