Down and Dirty: Bengals Need To Win In Trenches To Beat Titans

Bengals must embrace winning ugly at line of scrimmage against Titans team that runs and stops the run. 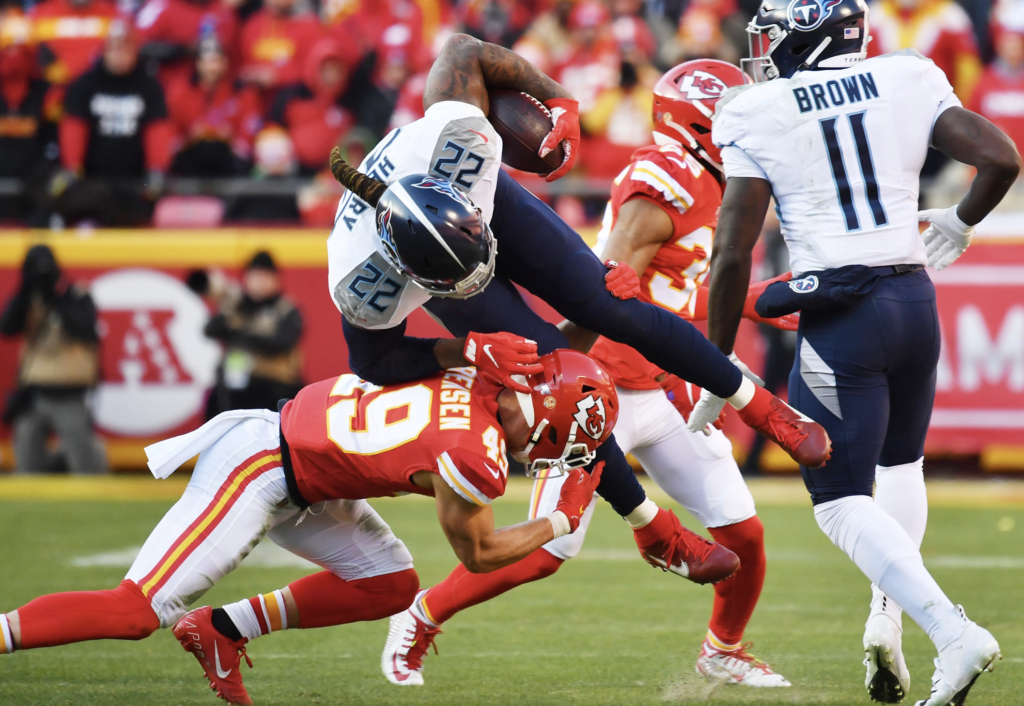 CINCINNATI – If ever the Bengals were going to get down and dirty and win a road playoff game, this is the time and place.

This Saturday’s game against the top-seeded Tennessee Titans in Music City will truly be playoff trench warfare. The Men of Mike Vrabel do two things remarkably well, they run the ball and they stop the run. This is no accident.

Vrabel played at Ohio State. He began his NFL career with the Steelers. He won three Super Bowls with Bill Belichick and the Patriots and played on both sides of the ball, even scoring a touchdown against the Eagles on a pass from Tom Brady in their Super Bowl XXXIX win.

Above all, Vrabel wants his team to win the trenches, and he has a team built to that foundation.

And that foundation is built most prominently on the beast that is Derrick Henry. The perennial All-Pro back is coming off a nine-game hiatus due to a foot injury, which initially was feared to have ended his season. Henry doesn’t just run the football, he punishes people who try to stop him.

What is the key to getting Henry to the ground?

“It’s something you’ve been doin’ since you were a kid, it’s just a bigger person. You’ve got to go in there and really want to do it.”

Derrick Henry just stiff arms everyone in one of the best TD runs you will ever see!#JAXvsTEN pic.twitter.com/VrteMn4oM8

In last year’s 31-20 Cincinnati win at Paul Brown Stadium, the Bengals still allowed Henry to run for 112 yards on 18 carries and a touchdown. The Titans ran for 218 yards on 29 carries. The difference was turnovers and time of possession. Ryan Tannehill threw a key red zone interception and the Bengals held the ball for 36 minutes, converting 10-of-15 on third down and going 4-for-5 in the red zone.

Above all, this must be the mindset of the Bengals Saturday in Tennessee. And it mustn’t stop if Henry isn’t on the field. Like Henry, D’Onta Foreman is averaging 4.3 yards per carry, and has three touchdowns while Dontrell Hilliard has been even more explosive, averaging 6.3 yards every time he totes the ball. Even quarterback Ryan Tannehill is a legit threat. He averages 4.9 yards every time he tucks and runs, and he’s got seven touchdowns with his feet alone.

“Forget about the talent they have for a minute,” Zac Taylor told me. “They do a really good job with the scheme. Todd Downing has been there for a while and he’s put those guys in a really good position to take advantage of the complements to the run and pass stuff. They’ve got everything. They have a lot of concepts that people steal around the league.

“It does start with the run. They’ve got a great offensive line. The receivers are willing blockers. The quarterback has to be able to get them in the right plays and then really good stable of running backs that really picked up this team when Henry got hurt. Then off of that they run all the keepers, all the play-actions, all the screens, all the Tannehill is great at the dropback stuff. So it presents a really unique challenge for your defense.”

The Titans allowed just under 85 yards rushing per game this season. Even with Derrick Henry missing the last nine games of the regular season, the Titans, with Foreman, Hilliard and Tannehill ran for 141.4 yards per game. Only the Eagles, Colts, Ravens and Browns were better on the ground this season.

This is fascinating on a lot of levels. The Bengals, having lost Larry Ogunjobi for the season and Mike Daniels indefinitely, were – for the most part – stout against the run this season. They had a bad game against the Browns but overall allowed just 102.5 yards a game on the ground, good for fifth best in the NFL. With regard to the above, they beat the Ravens twice and lost to the Browns once with their regulars.

Not really figuring the regular season finale in with mostly backups playing the entire game. The loss of Ogunjobi hurts but if there’s one team that has the depth to compensate, it’s the Bengals. B.J. Hill is more than a serviceable replacement and Josh Tupou could be ready by game time after suffering a knee injury against Cleveland in the finale. Josh Jacobs was sprung for some big runs Saturday, which sparks some concern. He ran just 13 times for 83 yards, including a 35-yarder that Mike Hilton saved from behind.

The Titans’ offensive line features tackles Taylor Lewan and David Quessenberry, guard Rodger Saffold and Nate Davis and center Ben Jones. This is a monstrous unit. Lou Anarumo and the Bengals need to find a way to penetrate, whether it’s gimmicks or stunts or extra bodies close to the line.

Mixon might have a tougher time this week. Only the Ravens this season were stingier against the run than the 84.6 yards a game the Titans permitted during the season. However, that might not be a bad omen. Mixon and the Bengals were able to pick their spots against Baltimore in the first game and broke free for some big gainers in the second half. That formula could be repeated in Nashville if the Bengals are able to lighten the box with some Burrow passes in the first half. Jeffery Simmons and Teair Tart are two of their studs in the middle and Trey Hopkins, Quinton Spain and Hakeem Adeniji will have to be up to the task.

The numbers suggest the Bengals quarterback will have his chances to throw the ball around the field quite a bit. The Titans are just a tick above the Bengals in terms of passing yardage allowed in the regular season. The Titans rank 25th and the Bengals 26th. But the Titans do have corner Kristitan Fulton, who played with Burrow at LSU. They also have Janoris Jenkins and ball hawk safety Kevin Byard. There are plays to be had but the execution, especially on the road, has to be precise. Burrow has shown he’s capable. The Bengals offense needs to stay on the field and build momentum something they achieved in the first half last Saturday but stalled with in the second half before hanging on for the win.

They lead the Titans 24-7 in the fourth.