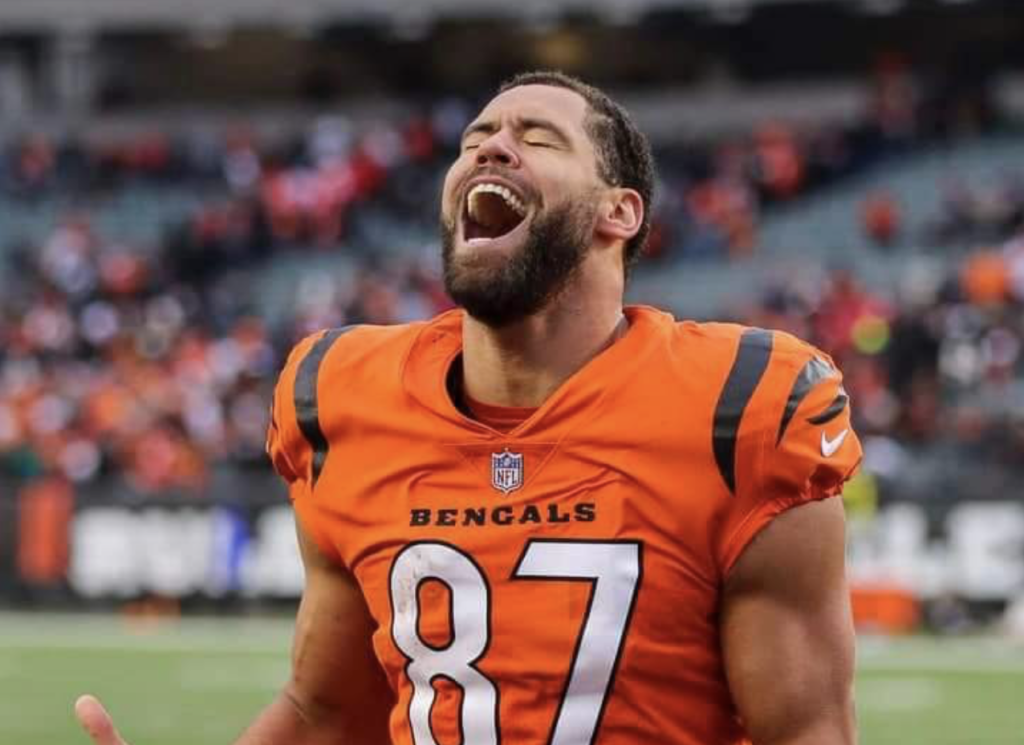 LOS ANGELES – If C.J. Uzomah doesn’t take one snap in Super Bowl LVI, his presence alone could make a huge difference for the Bengals in their bid to take home their first Vince Lombardi trophy.

While Joe Burrow has been Joe Cool in his demeanor from the beginning of training camp to reaching football’s biggest stage, Uzomah has been the man who created the battle cry of “Why Not Us?” and has made believers of everyone in stripes in the Bengals locker room.

After Kevin Huber and Clark Harris, Uzomah has the longest tenure of any player in Bengal black and orange. He, in many ways, is the heartbeat and pulse of the most positive and forward-thinking team in franchise history.

It would be entirely understandable if Uzomah didn’t dress because of his twisted left knee.

Of course, don’t tell that to Uzomah, the eternal optimistic and doctor of good vibes. The tight end who sprained his left MCL in the AFC championship win over Kansas City, has been working feverishly in the last week with Bengals physical therapy and rehab guru Nick Cosgray and assistant Roberto Cardona.

“I’m feeling great,” Uzomah told me Monday. “I’ve spent a lot of time with Nick and the staff rehabbing this Achilles injury I had last year so I kinda knew what I was getting into and what I was going to get out of hanging out with Nick and Berto and that staff. But it’s been a grind. A lot of early mornings, late nights, of just rehabbing and fighting through some stuff. But I feel really good. I feel really, really good.”

When you listen to Uzomah, you are left with little doubt that he intends to play Sunday. He is the ultimate example of what the mind thinks the body can achieve. Of course, the question begs to be asked, does he expect to play Sunday?

“To me, I’m not missing the biggest game. Right? I’m not missing it. That’s my approach going into it every day of rehab. If I wake up and I’m like, ‘Oh man, it’s a little sore,’ it doesn’t matter. Right when I get into that building, it’s ‘go time’, let’s get this rehab going. Let’s doing everything I can to make sure I’m ready and available to play. We’re playing for the freaking Super Bowl. That is sick. That is so sick.”

The Bengals would not be here in the Super Bowl without Nick Cosgray. That is not hyperbole. It’s pure, simple fact. Listen to the quarterback who underwent intense physical rehab under Cosgray’s supervision.

“I wouldn’t be having the season I had without him,” Joe Burrow said Monday. “He put off vacations and all that on hold to bring me back to the player I was pre-injury.”

Cosgray worked with Burrow, Uzomah, Trey Hopkins and D.J. Reader in this past offseason, four starters who have all played crucial roles in the Bengals rise to the top of the AFC.

“They’ve worked hand-in-hand for these last couple of days, but not only that, they worked together all last offseason,” Taylor said. “C.J. got hurt in the second game of the 2020 season. He was with Nick every step of the way up through training camp. So, they had that previous relationship. I think they know how to work with each other, communicate with each. Every practice I see C.J. over there working with Nick I go over there to see where C.J.’s at. It’s obviously been very positive.”

It’s not just Cosgray’s expertise, it was his willingness to sacrifice, communicate and motivate the players during an incredibly difficult time.

“You can’t say enough great things about Nick, the respect that Nick has in our locker room,” Taylor told me. “There’s no limit you can put on that. He’s worked with Joe Burrow and D.J. and Trey Hopkins and C.J. So, you got all these high-level players that have worked with Nick and come back and played at a very high level. We don’t want any injuries going forward but those guys understand the job he’s done with some of his best players, and they’ve gotten back and played even beyond that level.

“They’ve got the faith that he knows exactly what he’s doing. He’s got that right rapport with the guys where he knows how to push them, communicate with them because that’s where you see people at their rawest, coming off injuries, doing all the grueling rehab work. Those are tough days, and that’s where you can really test these players and see what they’re about. I think it’s important that you have the right tact and personality to manage that, and Nick certainly does. And I think the players and coaches really respect that.”

.@cj_uzomah knows the fans deserve a run like this and reminds everyone that the job's not done.