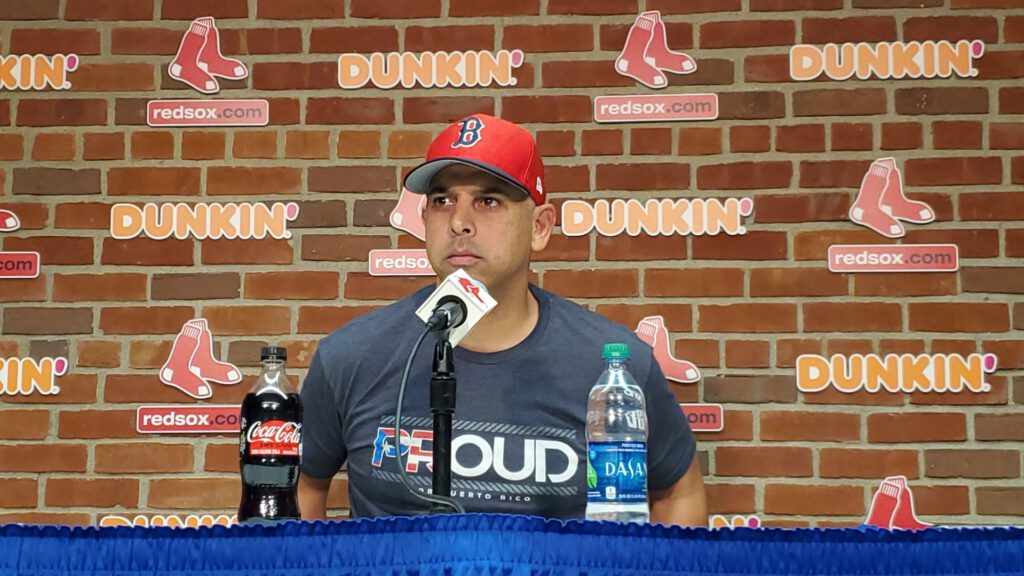 BOSTON — For a team that won a franchise-record 119 games and a ninth World Series 11 months ago, the Red Sox sure seem like a dysfunctional mess.

The optics Monday alternated between unfortunate and awful.

The unfortunate was ruining the vibe of what should’ve been one of the feel-good moments of a disappointing season when David Ortiz returned to Fenway Park to throw out the first pitch before what would be a 5-0 loss to the Yankees. Ortiz was making his first public appearance since suffering life-threatening injuries in a shooting on June 9 in the Dominican.

He threw out a first pitch to Jason Varitek and then delivered an emotional “thank you” to everyone who had his back during his recovery, including his “real” Boston family inside Fenway Park.

That’s incredibly ironic because, just an hour earlier, Alex Cora had to sit – admirably so – in front of reporters to explain why his boss was let go by John Henry, the owner of the franchise. Cora was the person who had to have the back of an employee that was let go in the middle of a game on Sunday night baseball as Tom Brady was talking about beating the Steelers, 33-3, on Sunday night football 27 miles to the south.

Dave Dombrowski, who served as President of Baseball Operations during a three-year reign as AL East champions, was officially let go in the aftermath of another ugly 10-5 loss to the Yankees early Monday morning for what appears to be a mix of bad contracts and bad internal karma.

Instead of celebrating the inspirational return of the most clutch player in its long and storied history, skeptics assumed (incorrectly) that the team was orchestrating this as a distraction from the Dombrowski debacle. As a matter of fact, Monday’s Ortiz moment was scheduled as a surprise to fans.

This is what happens when you have dysfunction inside an organization. Optics get completely thrown out of whack.

The awful part of Monday was sending Alex Cora out to speak not only about the man who hired him after the 2017 season but speculate about what the organization’s philosophy might be moving forward.

“Unfair or fair, team already sent a statement.” Cora said, taking the public stance for Dombrowski firing. “This is a guy that gave me a shot as a manager. Successful last year, this year, not so much. I think the organization decided to go in a different direction. No (I didn’t see it coming).”

The organization sent out a press release Monday morning effusive in its praise and appreciation of the job Dombrowski did in leading the Red Sox to the postseason the last three seasons and a historic World Series title last year.

“Four years ago, we were faced with a critical decision about the direction of the franchise,” said Henry. “We were extraordinarily fortunate to be able to bring Dave in to lead baseball operations. With a World Series Championship and three consecutive American League East titles, he has cemented what was already a Hall of Fame career.”

“Dave will hold a special place in franchise history as a key architect of one of the greatest Red Sox teams ever assembled,” Werner added. “His willingness to make bold moves helped deliver our fourth World Series Championship in the 21st century.”

“Dave and I enjoyed a tremendous partnership these past four seasons,” said Kennedy. “His baseball acumen and relentless pursuit of winning produced a season that will long be remembered by all of us.”

The release indicated that a search for the next baseball operations leader “will begin immediately.” For the time being, the baseball operations department will be led by Assistant General Managers Brian O’Halloran, Eddie Romero and Zack Scott. In addition, Senior Vice President of Major and Minor League Operations Raquel Ferreira will take on an expanded role within the transition team.

But the team surely knew that a press release with statements from Henry, Werner and team president Sam Kennedy wouldn’t answer the simplest of questions – why the change and why now?

“I wasn’t expecting something like this but it happened,” added Cora, who went through a general manager firing in 2011 when the Nationals fired Jim Bowden. “I know it’s going to be fine.”

The Red Sox lost again to the Yankees Monday, 5-0, at Fenway Park. It officially eliminated the Red Sox from the division for the first time since 2015 and dropped them to 36-37 at Fenway Park. They finished the season series with the Yankees, losing an amazing 14 of 19 games this year. 2018 seems so far away.

“This season has been… consistently inconsistent,” Cora said. “That’s the way it’s been all season. It’s hard because we feel responsibility for what happened on field.”

But Cora hinted at the tension inside the Red Sox structure, even during a 119-win season last year.

“Looked like it was perfect but it wasn’t a magic carpet ride. It was a grind,” Cora said. “He really cared about me. …. talked about now and the future. He would take the whole staff out on road, save us money take out on the road. Nothing but respect for Dave. Big part of my life right now. We never thought this was going to happen.”

Cora flatly denied any “disconnect” theory between Dombrowski and rest of front office, insisting, “I do believe we’re going to be fine.”

If only it were the Red Sox executives saying that Monday.