Elliott Gets Redemption With Charlotte Win 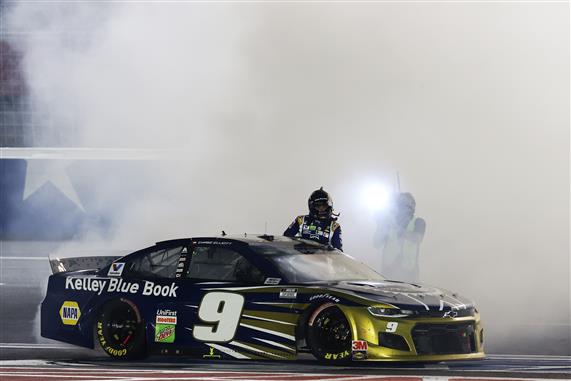 The victory was Elliott’s first of the season, coming after he’d been one of the fastest cars all year.

Thursday’s win was also redemption for a late-race pit call on Sunday night that cost him a victory in the Coca-Cola 600.

Elliott said he was expecting the caution to come out in the last five laps and ruin another strong run.

“I was just waiting for the caution to come out, to be honest,” Elliott said.  “After the last couple weeks, I just didn’t think…it was going to go green to the end.”

Elliott started the night 19th – after the top 20 finishers from Sunday’s race were inverted – and he quickly worked his way to the front.

After taking the lead from Kevin Harvick with 27 to go, Elliott said his crew chief Alan Gustafson made the right call during the final pit stop.

“Appreciate our team,” Elliott said.  “Alan made a good call at the end to get it tuned up, and luckily the run went long.  I think that fell into our favor.”

Harvick had a dominant car on Thursday, and led a race-high 63 laps, but his car fell off halfway through the final run.

Harvick said his car didn’t have a good setup if the race went green.

Denny Hamlin finished second after starting 29th.  He said his team made good adjustments to help him get to the front.

“Pit crew just did a phenomenal job picking up a bunch of spots,” Hamlin said.  “Our whole FedEx team prepared a good car.  Every time we come back to a racetrack for the second time our results are really good.”