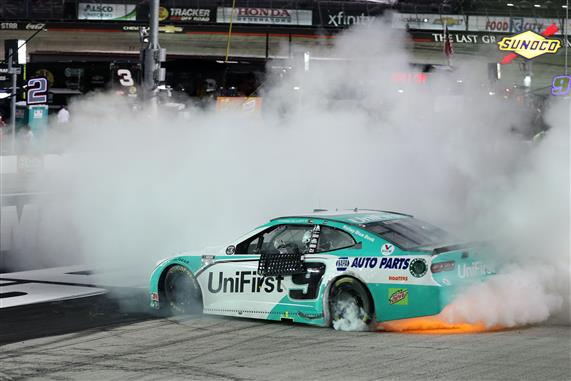 Elliott had a strong car throughout the race, and quickly worked his way up to the front by the end of the first stage.  After racing with Kevin Harvick and Ryan Blaney for the majority of Stages 2 and 3, Elliott had to hold off Kyle Busch over the final 15-lap stage to pick up his first All-Star Race win and the $1 million prize.

Elliott said the win was a good reminder of what his team is capable of after struggling the past few weeks.

“Just really proud of our team tonight and to rebound,” Elliott said.  “We’ve had a pretty rough couple of weeks and just felt like we’ve kind of gotten off-base and felt like I was struggling.  Tried to hit the reset button this week and came out and put on a great performance.”

An exhibition race featuring the race winners from the past year, the All-Star Race was moved to Bristol due to the COVID-19 pandemic.  Bristol allowed nearly 25,000 fans at the event, and it was the first time since 1986 that the event was not held at Charlotte Motor Speedway.

Elliott, NASCAR’s Most Popular Driver, said it was exciting to win at Bristol in front of the largest crowd since the pandemic began.

“Bristol is an electric atmosphere that is unlike any other that we go to,” Elliott said.  “What a better night to have fans back than tonight.”

Busch tried throughout the race to get the high line worked in, but he ultimately fell short by about a half-second to Elliott.

Busch said if the outside line had come in he may have been able to challenge Elliott for the win.

“Just wasn’t quite wide enough,” Busch said.  “If it was a little wider and you could carry a little bit more speed with it, I might have had a chance.  I knew I wasn’t going to catch him or pass him if I was down there; I had to do something different.”