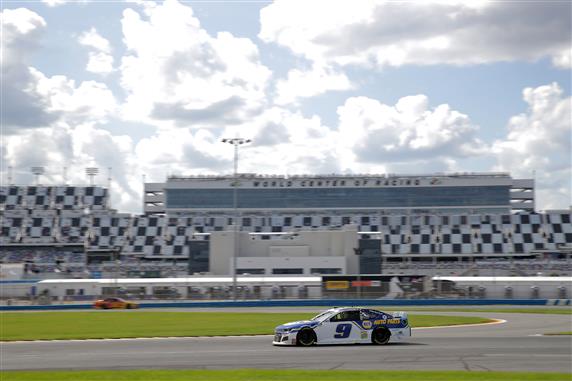 The race was the first on the road course for the NASCAR Cup Series.  The weekend, originally scheduled for Watkins Glen International, was moved to Daytona because of the COVID restrictions in New York.

Daytona’s road course is most famously used every year for IMSA’s Rolex 24 – a 24-hour endurance sports car race run in January – and the majority of the drivers in the field had never raced on the track’s configuration.

Elliott said it was an honor to win the first Cup Series race on the historic layout.

“Such a privilege to be here, I don’t take that for granted,” Elliott said.  “To reflect on the history on what has built this place is very special…striving to be there and maybe one day we can be a part of some great things.”

Elliott, who has become one of the strongest drivers on road courses over the past few seasons, ran up front for most of the day, and had a 10-second lead late in the race.  A caution for Kyle Busch set up a late-race shootout between Elliott and Denny Hamlin.

Hamlin tried to force Elliott into a mistake, but Elliott said he tried to be perfect over the final three laps.

“I definitely made a few mistakes, that’s for sure,” Elliott said.  “I feel like we did a solid job.  I felt like I could maintain that gap if I just focused on getting a good drive.”

“I was trying to keep it balanced front to rear, and felt like I could mess up pretty easy if I didn’t hit my marks.”

Hamlin said he needed to be a little closer to force Elliott into making a mistake.

“I just would have liked to stay closer to him to put a little pressure on him on entry,” Hamlin said.  “Just wasn’t quite clean enough the last two laps, but I definitely gave myself a chance.”