Joe Burrow throws a pair of picks, Defense gets chewed up by Nick Chubb again. 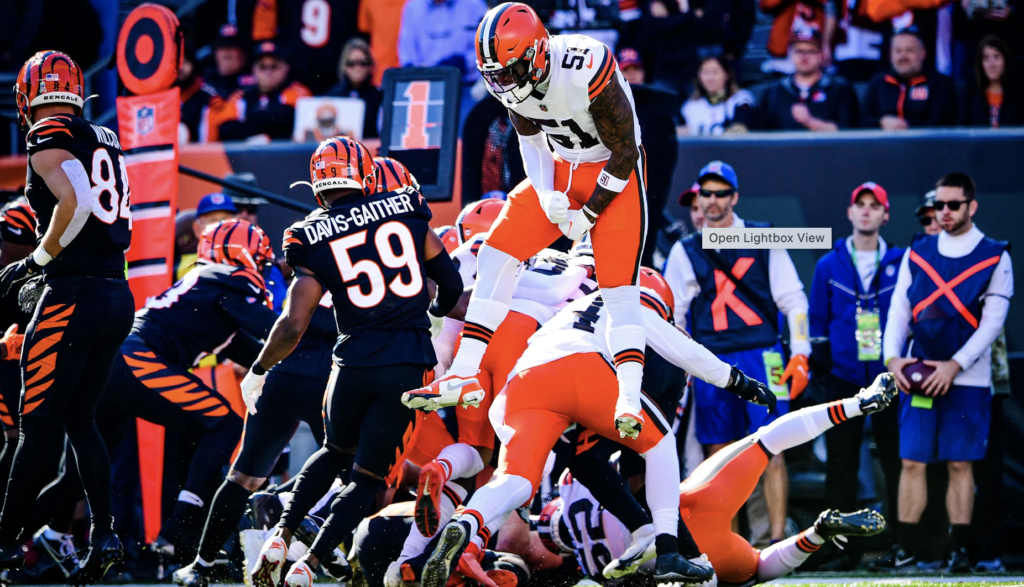 CINCINNATI — So much for redemption.

Denzel Ward returned a Joe Burrow interception 99 yards for a touchdown and Nick Chubb ran 70 yards for another score as the Cleveland Browns embarrassed the Bengals, 41-16, Sunday before a sellout crowd of 65,451 at Paul Brown Stadium.

Donovan Peoples-Jones burned Eli Apple for a 60-yard touchdown and finished with 86 yards receiving for the Browns, who beat the Bengals for the sixth time in seven meetings. The Bengals now have the bye week to reassess their effort, planning and execution before a meeting with the Raiders in Las Vegas in two weeks.

Before being pulled for Brandon Allen with five minutes left in the game, Joe Burrow completed 28-of-40 passes for 282 yards, two interceptions and no touchdowns. Burrow had at least two touchdown passes in each of his previous eight games. Baker Mayfield was 14-of-21 for 218 yards and touchdown passes to Peoples-Jones and David Njoku.

The Bengals held a dramatic advantage in yards and time of possession but couldn’t overcome three turnovers and another terrible tackling performance.

Joe Mixon ran for a pair of touchdowns for the Bengals, who fall to 5-4 and would be in last place in the AFC North if the Steelers beat the Bears on Monday night football. The Browns also improve to 5-4 with the win. The two rivals will have a rematch in Week 18 in Cleveland on Jan. 9.

The Bengals marched right down the field on the game’s opening drive, featuring a flea-flicker from Joe Burrow to Tee Higgins of 20 yards.

But the drive ended in disastrous fashion when Burrow stared down Ja’Marr Chase after the Bengals were given a second chance on third down with a Cleveland offsides. Denzel Ward easily jumped the route at the Cleveland 1 and rambled 99 yards down the left sideline for the touchdown.

That was just the first of several miscues for the stripes:

Samaje Perine dropped a sure first down at the Cleveland 30 that was followed by an awful Burrow throw for Tyler Boyd on fourth down. Cleveland immediately took advantage as Baker Mayfield threw deep 60 yards for Donovan Peoples-Jones, the hero of last year’s Ohio game at PBS. Eli Apple was beaten badly and the Browns took a 21-7 lead.

Ja’Marr Chase fumbled a pass on Cincinnati’s next possession, setting the Browns up at the Bengals 31. That resulted in a 28-yard Chase McLaughlin field goal and a 24-7 lead midway through the second quarter.

The Bengals were driving in the final three minutes of the first half when Burrow rolled out to his right when Myles Garrett gave him a shove after throwing the ball away. Several Bengals offensive teammates immediately came to Burrow’s defense and Jordan Elliot threw a punch in the scrum, gifting the Bengals first-and-10 at the Cleveland 16.

But Burrow was promptly sacked and then let 25 seconds run off the clock before a throw over the middle to Tee Higgins in the end zone. Higgins couldn’t come down with the ball and the Bengals settled for a 27-yard Evan McPherson field goal that cut the deficit to 24-10 at the half.

The Bengals sacked Mayfield and forced a punt to open the second half but the Bengals offensive line couldn’t protect Burrow and the Bengals drive stalled at their 44. The Bengals punted.

Nick Chubb’s 70-yard touchdown through a Bengals defense that missed three tackles was insult to injury and Cleveland had a 31-10 lead.

Burrow threw a pass for Chase and it was defended by Denzel Ward and picked off by D’Ernest Johnson and returned to the Bengals 7. The Browns settled for a field goal and a 34-10 lead.