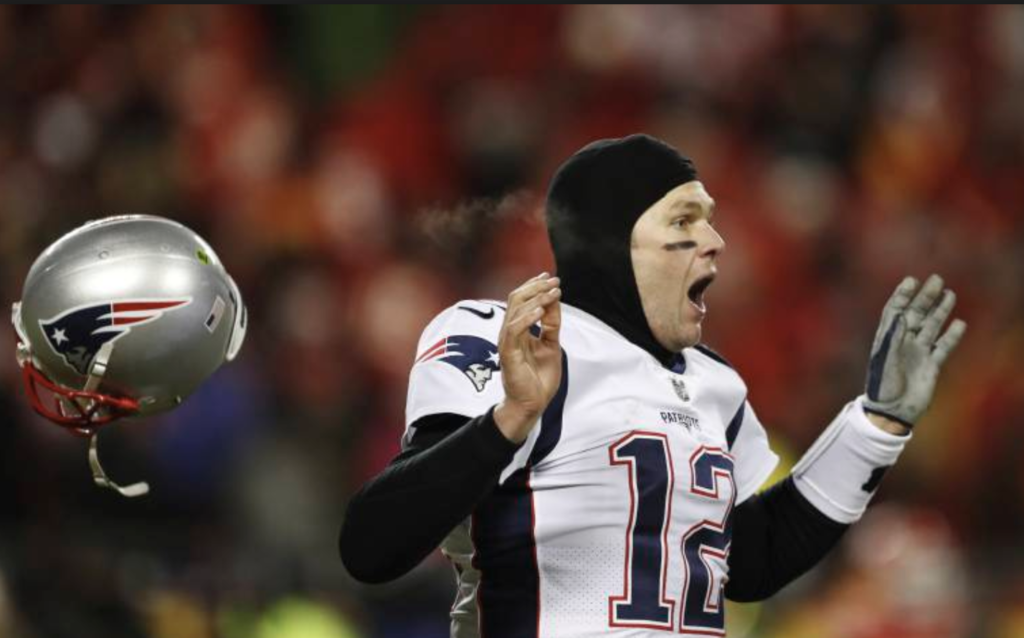 KANSAS CITY — Even his teammates were in awe of Tom Brady Sunday night at Arrowhead Stadium.

Talk about avenging one of his worst losses in the best ways possible. That’s exactly what the GOAT was able to accomplish in the wind and the bitter cold of Arrowhead Sunday night in a 37-31 overtime classic that will go down in Patriots annals as one of the most heart-pounding and scintillating wins in franchise history.

“This is just what we’ve come to expect but it’s still unbelievable what he does in the clutch. To have the opportunity to put a good drive together, go down and score, and potentially end the game, I liked our chances,” Chris Hogan, shaking his head, told me after the game, with his eyes still blurry from the cold and stunned amazement of what just happened.

“He has an ability to keep us all calm in the huddle, knowing that we all look to him for leadership and direction when it matters most,” said Burkhead, whose second touchdown sent the Patriots to their 11th Super Bowl in franchise history.

Brady also threw several passes in the final quarter and overtime that required the greatest of precision, like his dart to Julian Edelman of 15 yards on third-and-10 at the KC 45.

Like touch pass to Rob Gronkowski of 11 yards that set up Sony Michel’s touchdown on fourth and inches.

Brady is human. He did throw the interception to Reggie Ragland in the end zone in the second quarter that kept the Patriots from going up 14-0.

“Part of playing sports is just staying in the moment,” Brady explained. “We always say one play at a time and you can’t make up for things that happen in the past. You just have to think about what you are going to do moving forward.”

But he also made up for it by directing a perfect drive of 90 yards in eight plays before halftime that gave the Patriots a two-touchdown lead heading into halftime, His beauty of a dime dropped into the hands of Phillip Dorsett from 29 yards out was picture perfect.

Brady finished 30-for-48 with just one touchdown pass. But that hardly tells the story of how much of a leader he was on Sunday when the Patriots needed him the most.

How does he continue to do what he pulled off Sunday night at Arrowhead when the crowd noise is deafening?

“When you have 70,000 people cheering against you, it is pretty sweet when you win on the road,” Brady said.

Deep down, Brady knew the Chiefs were not quitting down 14-0 at the half. And the Chiefs first drive of the second half proved his instincts correct. Patrick Mahomes, who was looking to match the 2001 Brady in making the Super Bowl against the Rams in his second NFL season, drove the Chiefs down the field and converted on a remarkable 54-yard connection with Sammy Watkins, followed by a 12-yard in-cut from Travis Kelce for the touchdown.

Brady directs a 10-play, 75-yard drive in 4:13, capped off with a 10-yard Sony Michel run on fourth-and-inches. Patriots lead again, 24-21. Chiefs return fire with a Damien Williams run that put the Chiefs up, 28-24, with 2:03 left. Brady, unfazed, and with three timeouts left, did it again, this time with some help. After Chris Hogan couldn’t hang onto a pass on second down, Brady threw a pass that went off the hands of Rob Gronkowski and into the waiting arms of Charvarius Ward for the apparent game-clinching score. But Dee Ford was called for offsides.

Brady, with life extended, dropped a perfect 25-yard pass to Rob Gronkowski at the Chiefs 4. Next play, Burkhead in for the touchdown and it was 31-28 Pats with 39 seconds remaining in the fourth.

Nevermind that Mahomes, in a matter of 28 seconds, drove the Chiefs down for a game-tying field goal. The moment that Matthew Slater called heads in overtime and it was heads, the game was over.

Brady with the ball and a chance to go the Super Bowl, even on the road, is about as close a sure thing as there is. Just ask the Atlanta Falcons in Super Bowl LI, when the Brady never let Matt Ryan have a chance.

“These are memories that will last a lifetime,” Brady said. “I said it a few weeks ago, I am blessed to find something that I love to do, that I love to work at. That has probably been the biggest blessing in my life. I love working hard at trying to make improvements. Every year, we start at a different place. I love the grind of it, being in the moment. This was an incredible win. I will remember this one for the rest of my life.”

So, too, will every Patriots fan who once again had the privilege of watching the greatest quarterback of all time advance to his ninth Super Bowl.