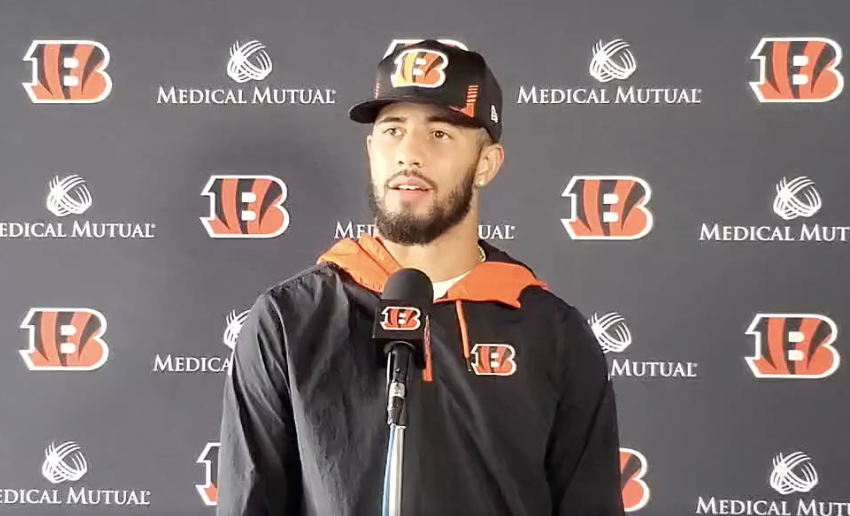 And the City of Cincinnati is really starting to feel the warm and fuzzies about this Bengals team, not just this season, but moving forward for years to come with a franchise quarterback, a young and gifted receiving corps and a defense that looks ready to take its next step that will lead them down a playoff path for the first time in six seasons.

There’s a lot that needs to take place in the next two months for the latter part of that equation to materialize.

But taking a step back and unloading my notebook reveals some interesting nuggets this week about the Bengals.

First, the will and intention of Bates is clearly to not let any uncertainty over his contractual future in Cincinnati cloud what he knows is a great opportunity. Bates and this defense will need their best focus and execution Sunday to defend and contain Lamar Jackson, an early-season favorite with Kyler Murray in the NFL MVP race.

Ever since it was clear that his agent David Mulugheta and the Bengals front office were not going to get an extension done before the season began, Bates was intent on not letting that delay impact his play on the field, even when he banged up his neck on a tackle against Pittsburgh, missed two games and then had the wind knocked out of him on the last play against the Packers.

“I think it shows what my character is about, what I’m about,” Bates said. “I knew this team would have some success this year so it’s not surprising we’re having success, to me. So, I didn’t want this (contract situation) to be a distraction going into it and I knew I would be the leader of this team and the leader of this defense. Being able to handle it this way I think is very important to me.

“Obviously, there’s days that I have, honestly, that I feel like, ‘Man, I’m throwing my body around.’ I got beat up the first couple of games and you start thinking about that like, ‘Dang man, I’m getting beat up out here.’ But there’s other things you can do. My agent has done a really good job of protecting me in that way as well. Like I said, I’m focused on the season. I don’t want this to be a distraction at all because I know how special we can be this year.”

As for his reaction to Mike Hilton’s decision to end his own presser with the three words “extend Jessie Bates,” Bates wasn’t given a heads up but he also wasn’t surprised.

“Yeah, I had no clue until the end of day when I looked at my mom’s group message and she was like, ‘Hey, we love the support of the team!’ I had to walk up to Mike’s locker and say, ‘Hey man, I appreciate that.’ But yeah, I had no clue Mike was going to do that at all. So, pretty cool.

“I would say that this is not the first time that this team has gotten behind me, being named a captain for the first time while all of this is going on. I felt like I could kind of take advantage of it, kind of to be that stand-up guy for this team. Things don’t always go your way in life, but you’ve got to respond the right way. And I always think about my mom’s situation. She’s always worked her ass off and she just got a promotion (Wednesday). That (contract extension) will come when God’s timing is the right timing. So, I’m just going to continue to be Jesse Bates.”

When that new deal does come down the pike, Bates will gladly share with the woman who made it all possible in his youth.

“My mom won’t have to worry about anything ever. She’s done everything for me and my siblings. I get emotional talking about it but I just try to be the same me, do what I have to do to receive that (new contract). So, I’m still in the process of doing that and hopefully it’ll happen sooner than later.”

The term blackout was used in generations past to describe those who either passed out or lost conscientiousness. It can also mean one who loses touch with reality and those around him. The last definition is the one appropriate to describe defensive edge Trey Hendrickson has he unleashes his fury against those like rookie Penei Sewell who dare get in his way of the quarterback, as was the case last Sunday.

Hendrickson now famously was chiding Sewell after beating him early in last Sunday’s game in Detroit. Zac Taylor nervously smiled Friday when asked how close he came to a taunting penalty of 15 yards.

But Hendrickson isn’t going up against Jared Goff this week. He’s going after one of the NFL’s best, and most elusive in Lamar Jackson.

“I think our coaches did a great job of putting us in the right place for this game plan. I’ve seen his film obviously for the last four years. It’s not something I’m completely clueless about. He’s a special talent and I look forward to the challenge. I think (QB containment) is something we emphasize every week, is quarterback contain. Obviously, there’s a little heightened (emphasis) on that as there would be for playing Kyler Murray as well. There’s always games where you have to make sure (to contain). Russell Wilson, he’s another guy you plan that way. I played those guys. So, I do understand there’s a game plan but part of it is let it loose.

As for “Blackout Trey”?

“You don’t see the Trey Hendrickson that I see every day,” Bates told us. “When he blacks out, there’s not a lot of guys that can block him or stop him, and I think that’s the reason we’re having some success this year on the defensive side. So, Trey brings that mentality and kind of roams around the whole entire defense to kind of play with attitude and it’s shown. It’s shown for sure.

Jesse Bates introduces the world to "Blackout Trey" as in #Bengals edge Trey Hendrickson a man on a mission on the field. pic.twitter.com/nzouGMi1ii

“He’s a really good person, first of all. He knows he blacks out. That’s the funny part. He knows he blacks out then he’ll walk up to your locker like, ‘Hey man, I’m sorry. I blacked out right there. I may have said a few things. I love you, still.’ That’s kind of how Trey is, compared to when he’s up here (talking to media), smiling a lot and stuff like that. When I say, ’Trey blacks out’ ask him what ‘Blackout Trey’ means.”

Note to self, done.

Bill Belichick was – and still is – fond of the expression “availability is the best kind of ability” in describing the quality of an NFL roster.

The Bengals head into this weekend against Baltimore in very good shape, health-wise. Only Tyler Shelvin (illness) and Jalen Davis (ankle) appeared on the Friday injury report, and both were likely going to be inactive as it stands. Now, after finding that piece of wood to knock on, it’s important to note that starting corner Trae Waynes is nursing a hamstring for the second time this season and is on IR and D’Ante Smith and Xavier Su’a-Filo are on IR also with knee issues.

But what keeps coaches up late at night are the soft-tissue injuries such as hamstrings, quads and pectorals that are often the result of a lack of – to use a Tom Brady/Alex Guerrero term – pliability.

The training staff, led by Joey Boese, Director of Strength and Conditioning, stay in the ear of Zac Taylor, making sure of the training priorities of each player and group heading into a game.

“Joey Boese comes up to my desk once a week with the numbers from the week before,” Taylor said Friday. “‘Here’s Wednesday, here’s what it looks like. Here’s Thursday, we can ramp it up a little bit more, here’s Friday, we need to scale back.’ He’s always on me, whether I want to hear it or not. He makes sure I hear it. And over the course of him beating it over my head, we eventually get it right.

“Our players have done a great job of understanding why we do things the way we do them, and they rhythm we do them on,” Zac Taylor said Friday of the team’s weekly strength and conditioning program leading up to each game. “(They understand) why their speeds matter during practice, and that’s why we have all the data and Todd, Garrett and Joey do a great job managing it. We do it for a reason. We feel like there’s logic there. Our guys believe in it, and it’s worked.”

How much does luck factor?

“I’m always hesitant to say because you feel like you’ve managed it well in the past and it just doesn’t go your way,” Taylor added. “A lot of it is on the players taking care of their bodies as well.”