The Celtics began playing Enes Kanter in November, and over eight games he's played some of the best minutes on a team needing points wherever they can get them. 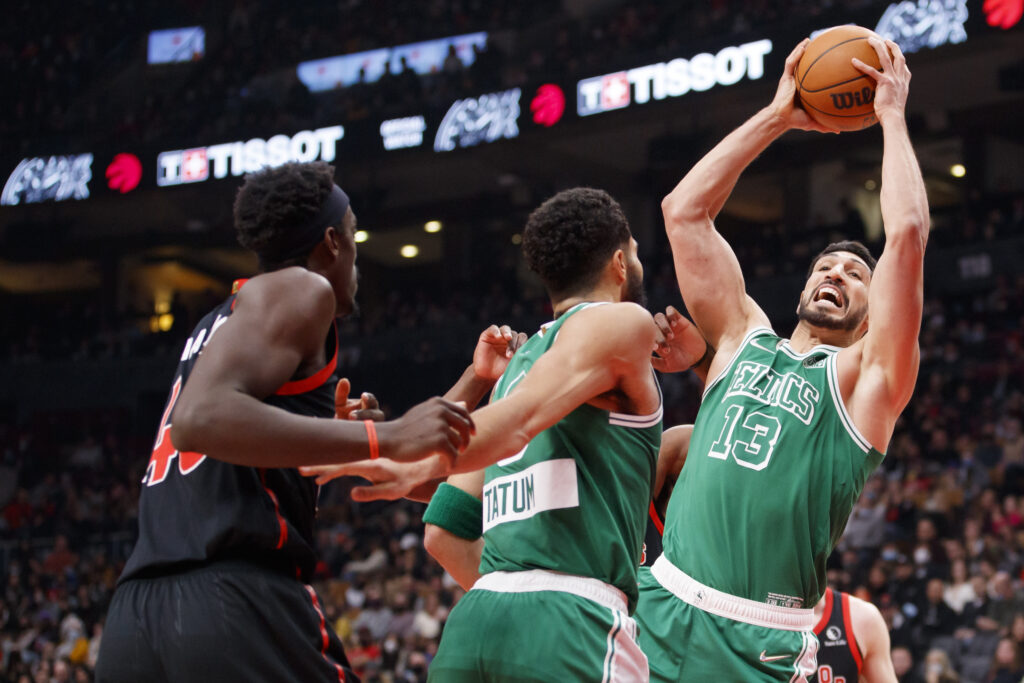 TORONTO, ON - NOVEMBER 28: Enes Kanter #13 of the Boston Celtics grabs a rebound during the first half against the Toronto Raptors at Scotiabank Arena on November 28, 2021 in Toronto, Canada. NOTE TO USER: User expressly acknowledges and agrees that, by downloading and or using this Photograph, user is consenting to the terms and conditions of the Getty Images License Agreement. (Photo by Cole Burston/Getty Images)
Share
Facebook Twitter Email

Broadcasters, writers, jersey makers and fans alike will need to adjust to Kanter’s name change, as his teammate’s sang Beyoncé’s Freedom in the pregame tunnel on Sunday ahead of the Celtics’ 109-97 win in Toronto. Once an afterthought on this roster, he’s now playing regularly through Robert Williams III’s absence and providing some of the most impactful minutes on the team. He posted nine points, 10 rebounds, a steal and a block in Toronto, and projects to impact the Philadelphia game as a big body against Joel Embiid and Andre Drummond on Wednesday.

Kanter became a US citizen Monday, which the team congratulated him for off the court last week. He’s rarely been available to the media amid his protest against China, which Ime Udoka has said goes unmentioned inside the team and that he has the right to do it. Udoka initially viewed Kanter defensively as incompatible with Boston’s switch-heavy scheme and sat him for the team’s first 13 games. Then, he entered the game on Nov. 15 in Cleveland when Williams III departed with knee pain, pouring in two put-backs in eight minutes.

“That’s who Enes is, it’s part of him, the name change,” Udoka said. “He’s passionate about his stances. You look at Artest and guys that have done it in the past. It’s something he wants to express and we’re all for it … he’s a guy that stepped up and was ready to play when his opportunity came up with Rob being out, and that’s all we really talked about … he’s been great lately.”

He’s since played in seven games with positive minutes in four of them. His big-body screens remain a favorite for Jayson Tatum to dance around. Against a team like Toronto, his nearly unmatched pressure on the offensive glass limits a team that wants to get out in transition by forcing box outs. While his touch isn’t the best around the rim, he consistently finds shots inside that the Celtics offense needs. His 5.4 points over 14 minutes matter, as do second and third-chance scoring opportunities.

Josh Richardson and Dennis Schröder mid-rangers, Al Horford post-ups, Marcus Smart threes, even a Grant starting role. This team will take points where they can find them.

Kanter found his way back to Boston on a league minimum deal after a successful second Portland stint in 2020-21. His seasons tend to run similarly, from early promising impact through bumps-and-bruises into a difficult fit against playoff rotations. For now, he’s good enough to pound opposing second units and his productivity in short stints — as a darling of the player efficiency rating stat — has him averaging career-best 16.7 rebounds (7.0 offensive) per 36 minutes, 24.5 REB%, 20.4 OREB%, 3.9 BLK% and 0.44 free throws per field goal attempt.

“His activity, and the pressure he puts on them. He’s a great screen setter, for one, initially,” Udoka said. “And then rolling downhill, not the faster roller, but he puts pressure on the rim with his offensive rebounding. Kept balls alive. Even if he doesn’t get it, it takes two, three bodies to keep him off.”

His 13.8 points per 36 minutes, 114.4 offensive rating and a competitive 102.4 defensive rating render him a rotation fixture, with minutes varying based on the matchup. Defensively, the cracks remain, but Udoka finds creative ways to use him to blitz the pick-and-roll and rotate back line defenders to defend against the roller. Opponents are shooting 36.5% against him and 31.3% from three, compared to 53.9% and 40% last year, and 48.8% FG last time he played in Boston.

He still gets blown by while defending dribble penetration and the Celtics love their switching scheme that he can’t play in, but there’s two sides to the ball and he’s helping the offense even while shooting a horrid 44.4%.

Schröder pulled him aside following particularly egregious breakdown against the Rockets.

Doesn’t look like Dennis Schröder was thrilled with Enes Kanter on this play. pic.twitter.com/T6G5Vo6KuW

Kanter doesn’t qualify statistically among pick-and-roll players, a statement on the overall small sample of his contributions. That’s all the Celtics need from him though, unlike in 2020 when he became the team’s starter in the first round and unplayable by round two against Toronto. He’s arguably the best third-string, minimum center in basketball.

This was AWESOME. #Celtics can really defend. I see you Kanter. pic.twitter.com/9adab6MevA

Last season, Kanter finished in the 69th percentile of pick-and-rollers with Portland, thanks in part to playing alongside dynamic guards and playmakers. The Celtics don’t target roll men as deliberately, something they need to work on. His screens, nonetheless, always level defenders and often create mismatches that hand Kanter a mismatch on the offensive boards.

A common criticism of Kanter is that many of his offensive rebounds follow his own misses. That’s remained true, but he’s also grabbing his teammate’s shots. Following Tatum’s misses inside during the star’s inefficient start allowed the Celtics to maintain the impact of the 12+ plays each game where Tatum drives. Against Toronto on Sunday, Tatum comfortably drove-and-kicked for his best passing game of the season, while Kanter scooped up two of his misses, scoring on one. The Celtics score 1.05 points per possession on Kanter put-backs, a low mark (42nd percentile). His lack of lift around the rim and difficult shot attempts on follows lead to some baffling point blank misses.

That and his eventual regression defensively probably still project to remove Kanter from the rotation when the playoffs or matchups with the likes of the Warriors happen. His survival against the Nets came as a surprise though, grabbing four offensive rebounds, blocking two shots and scoring seven points in seven minutes.

That likely becomes his sweet spot, playing spot minutes against opposing rotations he came take advantage of, like when LeBron sat in the Lakers game or when Drummond plays Wednesday. Kanter will back up Horford and Williams III when one or both sit or get hurt, and potentially allow the Celtics to start Grant Williams if they need his shooting. Horford and Kanter haven’t played together yet, but could form a good offense-defense bench duo, while Tatum’s lineups staggering next to Kanter outscore opponents by 18.9 points per 100 possessions.

On Sunday, they closed together.

“(Kanter) played well against San Antonio the other night and I thought about leaving him in at the end of the game, and so we went with that tonight,” Udoka said. “That unit was really rolling together and did a great job, like I said doesn’t always show up in the stat sheet  … if you set the screen well like he does, he frees up our guys to get downhill or get open shots … a quick roller and lob threat like Rob is valuable also. So they do different things, but both complement our team in different ways.”