Exhausted Nets Fail to Come Back as Celtics Sweep in Brooklyn

The Celtics swept the Nets after a 15-point Brooklyn comeback try fell one point, specifically one free throw, short. 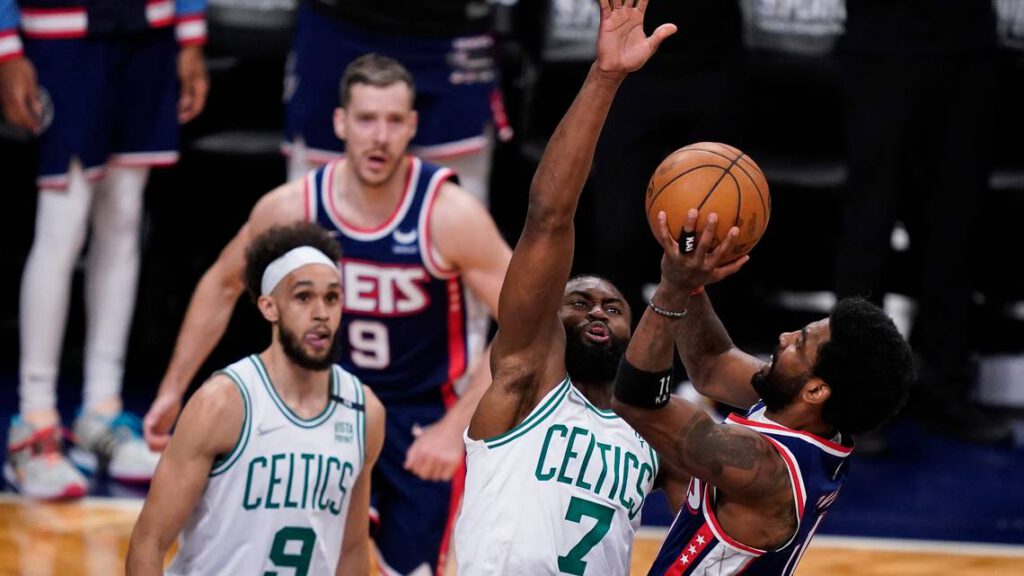 NEW YORK — The Nets had their first win of the series.

Jayson Tatum stood on the baseline, disqualified with six fouls, calling out defensive signals. Marcus Smart followed his own, rushing to trap Kevin Durant as he fired to Kyrie Irving for three. Brooklyn pulled within three points with two minutes to play after trailing by 15 in the second half. Jaylen Brown overdribbled and lost the ball to Durant on the next play, who buried a pull-up two. Brown snuck around Durant on Boston’s next trip and answered at the basket. Durant quickly requested the in-bounds pass and Smart struck.

“Marcus is going to be Marcus,” Ime Udoka quipped after. “Most of the time he’s going to make the right play, defensively and offensively. Takes me back to all those years of Manu, seeing what Pop was going through. He always said Manu being Manu, because you know he’s going to gamble at times and burn you, but more often than not they’ll make the right play and that’s what you’ve got to do with instinctual guys.”

Smart dove to the ground chasing the loose ball he jammed and still believed post-game unlatched cleanly. The night’s officials disagreed. Durant would shoot two free throws trailing by three. He missed the second. Brown grabbed the rebound and looped a long pass to Smart as time ticked away. Smart missed a layup at the other end. Al Horford followed from behind. Durant nearly tipped the outlet pass, nearly completed the comeback and the Nets nearly won a game. The Celtics swept them instead, with a 116-112 win in Brooklyn.

Udoka expected Net’s best shot based off the team’s comments coming in, and Durant’s aggression gave them that, scoring 39 points on 13-for-31 shooting. He scored 12 in the fourth, pushing from down 95-88 when Tatum picked up his fifth foul to within one points, but the Nets never led.

Unable to string stops together as had been the case for Brooklyn all series. They’ll now enter an offseason of uncertainty with Irving due a new contract, as are Bruce Brown and Nic Claxton, likely searching for a new head coach and solving the Ben Simmons situation after reportedly meeting to lay out plans for him to join the team. Simmons disappeared from the bench for the first time all series after being ruled out of Game 4, which the team hoped he’d debut in. Back soreness reemerged, along with mental hurdles reported by ESPN.

Instead, Durant found his footing firing away on three straight isolation plays early in the game. He hit a pair of free throws to begin the night, split a pair of his patented baseline mid-range looks, then stepped outside for a three. Picking up the pace proved vital, and Seth Curry hit an early three running with him to erase a small Celtics lead early at 10-10.

Tatum and Smart had answers though, in the form of structured, downhill offense. Any worries about official Scott Foster’s presence on the sideline subsided through three early foul calls on Curry and another pair on Goran Dragic, who replaced Curry, incensing the Nets sideline.

Tatum hit four straight free throws and dished a pair of assists while going without a basket in the first quarter for the third time in the series. He got Al Horford going in the pick-and-pop midway through, before Derrick White stepped off the bench to score five straight points, starting with a give-and-go through Smart.

Durant committed to going down shooting, beating White inside and targeting Robert Williams III when he checked in closer to the second quarter. A trio of long defenders switched and garnered back-to-back stops on Tatum, but Claxton hit a wall at the free throw line, missing all seven shots in a tight first half, finishing 1-for-11 and falling to 4-for-22 there in the series. He joined Wilt Chamberlain as the only players to ever shoot that poorly on that many attempts or more in a playoff game. Patty Mills and Durant nonetheless scored five straight on a slow-footed Williams and pulled the Nets within 30-26 after trailing by 10.

Curry stayed on the attack into the second quarter, hitting a pair of mid-range pull ups and reminding Brooklyn he entered the night 50% from the field and three on only 8.7. He even jumped on the ball to find Durant in the corner for a catch-and-shoot three try that rimmed out. Then, Tatum took off after a slow start, hitting a pair of rhythm threes to match two more Curry mid-rangers, on his way to eight straight points. That freed up Smart and Grant Williams on the perimeter, Williams burying three straight triples before half on four open looks from Tatum in the short roll and long passing sequences. The Celtics led 58-50 at half.

Smart continued to stave off Brooklyn buckets from Durant and Claxton by finding Theis and Williams III for buckets inside, Rob landing his second alley-oop since returning from injury. Williams III otherwise showed a lack of burst and positioning, fouling four times in 14 minutes and getting blocked by Curry.

Claxton scored twice inside from Durant to keep pace with Tatum’s three and free throw, but the Celtics’ star aptly fouled him inside on another play to drop Claxton to 0-for-9 at the foul line. Claxton hit his first on his 11th try later in the quarter, drawing the biggest applause to that point from a sullen Barclays Center crowd.

“We wanted to hack (Claxton and Andre Drummond) from the get-go,” Udoka told CLNS Media post-game. “If you don’t have foul trouble. That was one of our points of emphasis.”

Tatum leaned past Bruce Brown with fancy footwork, Jaylen assisted a Horford three and hit White behind him on the break to put the Celtics ahead by 15 late in the third. Running away with victory. Mills missed a corner three as the final seconds ticked away before the fourth, Dragic grabbed it and hit Curry in the opposite corner. Tatum contested and fouled him. Curry missed the free throw, Tatum complaining and unsuccessfully lobbying for a challenge. He didn’t get it, but he gave Brooklyn one more chance to believe.

Curry scored a quick layup into the fourth and jumper that hit every part of the rim before falling. Tatum scored five straight to give the Celtics space, before Blake Griffin pivoted inside after Tatum turned the corner on Durant seeking two more. He set himself, and Tatum went to the bench after an unsuccessful Udoka challenge as the Nets pulled within 95-91.

The same Griffin who gave Brooklyn a chance took it away. Brown darted a pass to Horford for three against Griffin’s slow rotation. Derrick White saved his errant pass from going out of bounds on the next offensive set, getting a quick paint touch after that he kicked out to Smart for another three. Brown split a pair of free throws following a Griffin foul. Then Irving and Durant made their final stand. Seven straight points as Tatum fouled out.

All series, Udoka hoped the culmination of forcing Durant to guard while bearing that scoring burden would translate into fatigue. Within two points of a lead, the career 88% free throw shooter missed.

“Ime man,” Smart told CLNS. “You’ve gotta tip your hat to that man. The way he schemed the game. Every game plan he had put us in the right spot to succeed.”