Fair or Not Tom Brady Needs to Play Better Than He Did vs. Lions (Film Review) 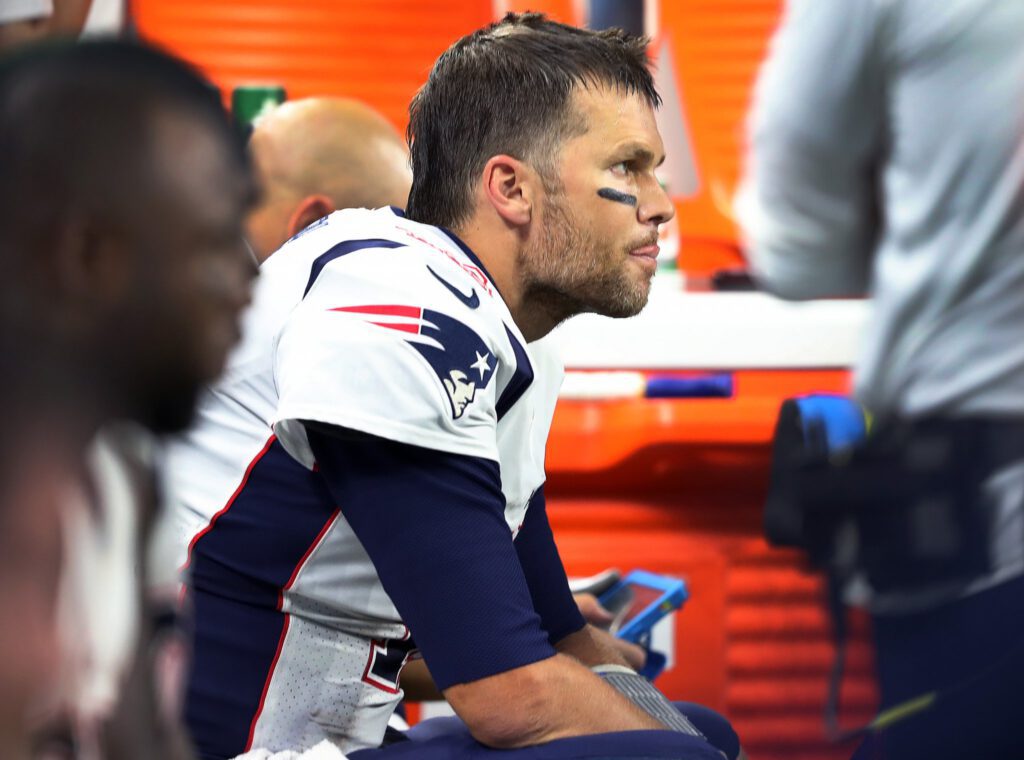 There are a lot of things that went into the Patriots’ offensive struggles on Sunday night in Detroit.

Let me be clear: Tom Brady is not the problem with this offense, and he’s not by any means solely to blame for the loss on Sunday night.

Everyone, from players to coaches, needs to perform better for the Patriots to start winning again.

Brady’s skills are not in decline, and there are fundamental issues with the wide receiver position that are significantly more worrisome than Brady’s struggles.

However, on Sunday night, Brady made some uncharacteristic mistakes that the Patriots cannot afford given the shortcomings of the rest of the roster.

Brady, as he did last season, needs to play like an MVP and it wasn’t an MVP-like performance for the three-time winner of the award in Detroit.

And my viewing of the game wasn’t the only one to come to this conclusion.

Brady’s 45.1 overall grade from Pro Football Focus was his lowest single-game grade since the infamous Monday night game in Kansas City in 2014.

Honestly, that should make Patriots fans feel better about the loss, because if there’s one player on the Patriots that we can count on improving its Brady.

Below, I will go through a handful of plays that sum up the issues that Brady is having both with his play and the play of his receivers:

Brady’s struggles mainly came on third down where he was 1-5 for ten yards with James White’s touchdown as the lone conversion on the night.

Let’s start with the first third-down of the game, an incomplete pass to Chris Hogan.

Brady and the Pats get what they want on third and four with Gronkowski and James White running a combination route at the bottom of the screen. White is going to run to the sticks and sit down at the first-down marker while Gronk pushes the coverage upfield. He’s open, and for some reason, Brady doesn’t pull the trigger. He stares White down for an extra second before coming off his first read to Hogan crossing over the middle. Hogan is also open, but because Brady was late to it, so the throw is behind Hogan and uncatchable. It’s possible that Brady thought the underneath linebacker would make a play on the ball if he threw it to White, but if he anticipates the throw and hits White on his outside shoulder this should be a first down, and it’s a play the Patriots go to in this situation all the time.

The failed third down on the Pats’ second drive was also an uncharacteristic miss by Brady.

Brady wants to throw the seam route to Patterson from the left slot, but he pulls it down when he sees the safety read his eyes and break underneath the route. If Brady fully trusts Patterson, it’s possible that he lofts this ball to the open area of the field where the 50-yard line marker is on the bottom of the screen. Instead, Brady pulls it down, resets, and finds Dorsett on his second read who’s wide open on a deep in route. There’s nothing wrong with Brady’s mechanics here, they’re always flawless, but the ball sails on him and he misses this throw to Dorsett.

Again, there’s some truth to chalking this one up to Brady not trusting Patterson, but that’s a throw he has to hit.

The Patriots’ inability to separate on the perimeter had Brady forcing the ball downfield, as you’ll see on this next play.

The Lions double Rob Gronkowski, and Detroit’s secondary blankets Chris Hogan and Cordarrelle Patterson. Brady ends up throwing this ball into double coverage to Gronk praying that he’ll make a play on the ball in the air. However, look at James White in the flat at the top of the screen. White is late to release into the passing pattern as he’s held up by the edge defender, but Brady can dump the ball off to White and count on his running back to make the linebacker miss in space. How often have we seen White do that? One the one hand, this play is a microcosm of the issues the Patriots receivers are having, as there’s no separation anywhere beyond the sticks, but I’d rather Brady give White a chance to make a play with his sweet feet than toss up a prayer to Gronk.

In my advanced stats report, you’ll notice that Brady was to blame for one of the two sacks, not any of his blockers.

Here’s the sack that is on Brady that came in the fourth quarter. The Patriots set up a crossing pattern with two clearout routes to give Chris Hogan a runway to catch and run for a first down on third and eight. Hogan has a few steps on his man as he gains leverage, and has plenty of green in front of him to run for the first down. However, Brady leaves a clean pocket almost immediately which doesn’t give him a chance to hit Hogan on this pass. Brady’s decision to leave the pocket breaks the play, and it’s a scramble drill for the Patriots receivers to get open before the rush gets to #12. If Brady hangs in there, he would’ve seen Hogan crossing, and even though you don’t know if Hogan would’ve ran for the first down, at least it would’ve given the Patriots a chance to convert on this play in a two-score game.

The Patriots offense is built on these types of catch and run opportunities.

Due to the lack of weapons around him, Brady started to press in this game, and his decision making slipped.

When Brady gets frustrated, he tends to throw heaves downfield in desperation almost as if he’s saying to the coaching staff, “there’s nobody [bleeping] open!”

And that’s how we got the back-breaking Darius Slay interception in the fourth quarter.

On Monday morning, Brady told Kirk and Callahan that the throw was a “poor decision” and he was in the mindset that he needed to make a big play. That speaks to the frustrations that were mounting for Brady as a result of his supporting cast, but the correct answer here is that it was a poor decision by the quarterback. Dorsett could do more to track the ball and adjust to throw in the air, but Brady throws this ball into double coverage on second down with 7:39 to go in a two-score game. We’ve seen Brady and these Patriots come back against greater odds in the past.

As many have pointed out, Brady’s receivers on the outside have also let him down a number of times already this season, and the intentional grounding penalty in the fourth quarter was a prime example.

Brady’s decision to heave the ball deep wasn’t his best move here, but as you can see both Cordarrelle Patterson and Phillip Dorsett ran to the same area of the field over the middle. It’s more than likely that Brady expected one of them, most likely Patterson, to run a post which is where he put the ball. Patterson actually is open on the dig route over the middle, but there’s no play call that would ask both perimeter receivers to run dig routes to the same area of the field at the exact same time. Put that one on the receivers, not Brady.

The state of Tom Brady’s arsenal as the Patriots await the return of Julian Edelman and the debut of Josh Gordon is the more significant issue here.

The Pats are without a doubt asking the 41-year-old quarterback to turn water into wine with a wide receiver position that’s asking too much out of Chris Hogan and Phillip Dorsett, and that can have an adverse effect even on the best players in NFL history.

But even when Edelman returns, and Gordon gets acclimated, the Patriots need Brady to play better than he did on Sunday night.

Again, that doesn’t mean it’s solely his fault that they lost, but the tape doesn’t lie, and it says that Brady deserves some of the blame for an anemic day on offense.

The margin of error for Brady is minuscule, as half a dozen miscues can be the difference when you don’t have game-breaking talent around you.

But fair or not, the Patriots need Tom Brady to play better if they’re going to get back to their winning ways.