Film Review: Breaking Down the Five Day Two Picks for the Patriots 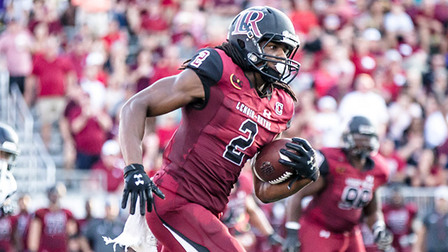 There were two major themes with the five selections for the Patriots on day two of the 2020 NFL Draft.

As Director of Player Personnel Nick Caserio said on a conference call early Saturday morning, the Patriots, as they usually do, prioritized versatility and four-down ability with their five picks.

Starting at the top with safety Kyle Dugger, who is an excellent punt returner and kick-coverage player, has the positional flexibility to play multiple roles in New England’s secondary.

With an excellent athletic profile, Dugger is a potential chess piece that one week could guard Travis Kelce and the next spy Lamar Jackson.

Similarly, the Patriots took dual edge rushers with back-to-back picks that both project to have a role in the kicking game and can play on and off the line of scrimmage on defense.

And then there are the tight ends, Devin Asiasi and Dalton Keene, with the latter offering up swiss-army knife versatility to play in-line, in the slot, h-back or even line up in the backfield.

The other theme of the night was double-dipping at two positions of need, linebacker and tight end, which Caserio said wasn’t intentional, but the duos complement each other nicely.

Above, you’ll find my film breakdown on the Patriots’ top pick in the draft, Kyle Dugger, and below, you’ll find breakdowns on Josh Uche, Afernee Jennings, Devin Asiasi and Dalton Keene:

Heading into day two, Caserio said they had three players’ names written down as targets, and two of them are now Patriots in Uche and Dugger.

At 6-1, 245 pounds, Uche is an undersized edge rusher that offers versatility as a standup outside linebacker or inside backer.

And he finished last season with 46 quarterback pressures on only 206 pass-rushing snaps.

He possesses an excellent first step and snap reaction with a full repertoire of pass rush moves (speed, rip-dip, long arm), making him best-suited for a role as a weak-side pass rusher.

But Uche could also play inside linebacker where he’s a better size fit and has the range to play sideline-to-sideline and drop into coverage.

Uche’s eye-popping qualities on film are his play speed and explosiveness as an edge rusher. He has terrific first-step explosiveness, and since he’s only 6-1, he can get underneath tackles.

At the combine, Alabama offensive tackle Jedrick Wills, who went tenth overall to the Browns on Thursday night, said that Uche was the toughest matchup he saw all of last season.

On this game-clinching sack against Northwestern, Uche’s get off, and initial burst out of his stance is on full display, as is his ability to make himself skinny and limit the surface area the tackle has to land a punch. Uche uses a two-hand chop to get the tackles’ hands off of him, keeping himself clean, and then has the ankle bend to turn an exceptionally tight corner to and great closing burst to finish the sack.

Along with his pass-rushing capabilities, Uche has excellent power to stand up over the interior offensive line and rush from there as well. On the play above, you see the effectiveness of his speed-to-power rush, as he gets into the centers’ frame with a stiff long arm and flushes the quarterback out of the pocket. Uche’s job on the play is to penetrate inside, so don’t discount him for the defense losing contain on the quarterback, that’s not on him.

Uche is inexperienced as a run defender from off the line, but he’s more than capable of taking on coverage assignments against tight ends and in zone coverage.

Here, Uche puts the straps on the tight end running the seam with some aggressive man coverage and then does well to play the tight ends’ hands through the catch point to knock the ball loose at the last second.

Uche is also capable of playing in zone coverage, and I had him break down a play from last season where he broke up a pass intended for Penn State speedster K.J. Hamler.

“It was a very unique play. I was playing off-ball [line]backer and the game plan was to force any dig route in front of me. So I just remember K.J. running a sluggo [route] which kind of made me stop and start my feet. It made me stop and play the dig, and he just took off. He booked it down the seam. My responsibility was to carry anything vertical, and I just remember just running as fast as I could and playing late hands – as soon as his hands went up, just playing through his hands and keeping my composure,” he said.

Uche raved about his fit with the Pats saying, “I would say it’s a good fit for me because I’m a hard-ass worker and the Patriots work their asses off.”

With his versatility and work ethic, it’s easy to see why the Patriots targeted Uche and sought to pair him with college teammate Chase Winovich to hunt ball carriers in New England.

Uche and Jennings complement each other nicely in New England’s reworked front seven.

With Uche playing more off the ball and weak-side edge rusher (opposite the tight end), Jennings comes in at 6-2, 256 pounds with nearly 33-inch arms (68th percentile) to project as a strong-side edge defender.

Jennings’s run-stuffing abilities earned him first-team All-SEC honors in his final season at Alabama, where he was also a permanent team captain as one of the leaders of the Tide.

In 2017, Jennings suffered a severe knee injury in the national semifinal against Clemson that lingered into the following season. But he got most of his explosiveness back in 2019.

Jennings can use his long arms and upper-body strength to set a firm edge for the defense, which makes him a good fit on the strong side.

Although he’s playing on the weak side here, you can see Jenning’s stack-and-shed traits that make him a productive two-gapper. Going up against soon-to-be draftee Saahdiq Charles, Jennings effectively strikes Charles in the chest with a stiff initial punch, gets underneath the pads to create upward leverage, and then posts up to read-and-react to the running back. Once the ball carrier commits to a gap, Jennings uses his hands to push Charles off of him and then pull him upfield, leading to a shed and tackle.

Jennings isn’t a screamer off the edge like Uche in pass-rush situations, but his length shows up there as well as does his instant snap reaction to get off the ball.

Here, Jennings flies off the ball with a significantly better reaction to the snap than the rest of his ‘Bama teammates. He then uses a heavy inside hand to jab at the tackle to soften the edge, giving him a clearer and more efficient path to sack top pick Joe Burrow.

With the athleticism and versatility of Uche and the stout frame of Jennings, the Patriots, along with Winovich, have younger and cheaper replacements for Kyle Van Noy and Jamie Collins.

We were thrilled to see Asiasi’s name come across the screen as the Pats’ pick in the third round.

Asiasi has a great football pedigree that starts at powerhouse De La Salle High School, and after a quick pit stop at Michigan, ends as a student-athlete with Belichick confidant Chip Kelly.

With the Dalton Keene selection ten picks later, the Pats got versatility, while with Asiasi, they have a more traditional in-line and flex receiver that offers a vertical threat up the field.

Asiasi had just eight career catches heading into last season before blossoming in Kelly’s offense to the tune of 44 receptions, 641 yards, and four touchdowns in 2019.

As we know, the Patriots love to get their tight ends vertically up the field off of play-action concepts, and Asiasi has the juice to win in that way.

On this play, Asiasi is in-line to the quarterback’s left and runs a quick post behind the linebackers that are out of position due to the play-action fake. Asiasi widens his route in his stem to square up the safety rotating to take him in man coverage and accelerates through the break to create separation and goes above his head to catch the high pass.

Here’s another example of Asiasi’s dangerous initial burst to clear the linebackers in a hurry working off of play-action once again. This time, the linebacker over Asiasi takes the cheese keying on the backfield fakes, and Asiasi quickly gets behind him and makes a great adjustment to haul in the pass.

Asiasi also has quick feet to shake defenders at the top of his routes. In this example, he attacks the linebackers’ leverage in his stem by taking his route at the defenders’ outside shoulder. That gets the linebacker thinking about something up the seam, and Asiasi smoothly cuts back inside and gets upfield for some yards after the catch.

As a blocker, Asiasi has technical issues to work out. His hand placement can be erratic, and he struggles at times to leverage blocks. But he’ll put the effort in and run his feet through contact to move defenders out of gaps with some regularity.

At 6-3, 257 pounds, Asiasi has a unique build for a tight end and had some weight and conditioning issues in the past that will need managing the next level.

But he has above-average speed for his size, and his explosiveness as a receiver shows up on film.

The Patriots traded back into the third round to select the swiss-army knife from Virginia Tech, with Caserio saying that there simply weren’t enough draftable players on day three to save all of their picks.

The 6-4, 253-pound Keene played in-line tight end, slot receiver, h-back, fullback, and even running back on an emergency basis when Virginia Tech had some injuries at the position.

Keene finished at the top of the tight end class in relative athletic score with a 9.34 out of ten, posting great speed, explosiveness, and agility scores at the combine in February.

The struggle with Keene’s evaluation is that he was severely underutilized in the Virginia Tech passing game. Despite playing multiple roles, he was seldom targeted down the field.

As a downfield receiver, Keene is essentially all projection at this point, with only 59 career catches in two-plus seasons as a full-time starter.

But on those 59 receptions, Keene broke nine tackles after the catch, highlighting terrific skill as a ball carrier on tight end screens and routes that let him work in space.

As a run blocker, Keene has some bad tendencies, such as ducking his head into contact, but he’s relentless and makes huge blocks on tape, mostly on the move or as a lead blocker.

Here, Keene is playing fullback as a lead blocker in the backfield and pancakes the play-side linebacker to lead his running back into the end zone.

Some will draw comparisons to the 2010 draft when the Pats took Rob Gronkowski and Aaron Hernandez in a similar double-dip at tight end.

Those comparisons are lofty, and quite frankly, unfair to both Keene and Asiasi, who shouldn’t be expected to blossom into the talents that Gronk and Hernandez were in New England.

But the Patriots now have two upgrades at tight end over Matt LaCosse and Ryan Izzo, adding some much-needed weapons for Jarrett Stidham.