Film Review: Breaking Down the Patriots’ Nine Third-Down Conversions Through the Air 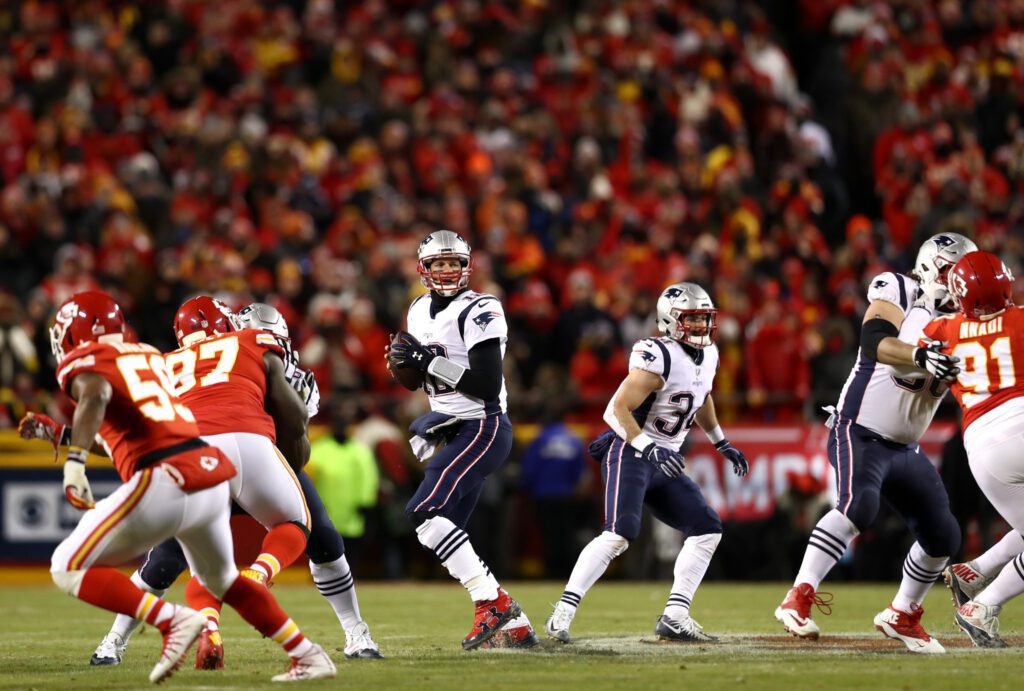 During the regular season, the Patriots’ third-down offense was uncharacteristically mediocre.

Bill Belichick’s team, which prides itself on situational football, was situationally poor on the money down throughout their first 16 games this year, especially through the air.

However, in the postseason, and against the Chiefs in Sunday’s AFC Championship Game, Tom Brady and the New England offense found themselves on third down.

In the regular season, the Patriots were 16th in the NFL converting on 35 percent of their third-down passing plays, and Tom Brady’s 52.4 completion percentage on third down was 29th out of 33 qualified quarterbacks.

But through two playoff games, that conversion rate has more than doubled to 68.2 percent, and Brady’s completion percentage on third down improved by almost 30 points to 81.8.

On Sunday, Brady converted nine third downs for an average of 10.8 yards per attempt.

And of course those three third and tens all came on the game-winning drive in overtime.

“It just came down to some great execution. We had some long-yardage situations that we converted. Missed some short-yardage situations, but overall, the ones that we needed to make at the end, fortunately, we made,” head coach Bill Belichick said on his Tuesday conference call.

“We had good protection, and the offensive line did a good job. Tom [Brady] threw the ball well. We made some tough catches, but just team execution. It’s not any one guy. We needed everybody doing it.”

That’s not a situation you really want to be in a whole lot,” offensive coordinator Josh McDaniels said about the three third and tens.

“They [the players] deserve all the credit in the world, they went out there under pressure and made some huge plays in those situations,” McDaniels continued. “I think it started with our pass protection. The offensive line, the tight ends and the backs did a really good job of really securing the pocket and giving us some time to survey the field in those situations because if you need to convert on a third-and-long, you’re going to have to hold the ball just a little bit. They did a good job of that, and then the guys ran routes to win, and in all three cases, we had to make tight throws and tight catches. Those plays always come down to player execution, and I thought our guys did a really good job under pressure in those situations.”

Below, we’ll break down all nine of Tom Brady’s third-down conversions to highlight the execution by the New England offense that led them back to the Super Bowl:

On the Patriots’ first third-down conversion through the air, Brady established a connection with Julian Edelman that would become the theme of the day. The Patriots came out in 11-personnel (3 WR, 1 TE, 1 RB) with Rob Gronkowski flexed out wide to Brady’s right in a three-by-one set. The New England offensive line and running back James White did a fantastic job of picking up a blitz and right tackle Marcus Cannon had a great rep against Chiefs pass rusher Justin Houston. But my biggest takeaway from a Chiefs perspective in this game is the usage of their deep safeties. Here, Daniel Sorensen is playing 20 yards off the line of scrimmage on third and seven. Plus, Kansas City is in a cover-3 zone leaving a linebacker on Edelman in the first eight yards. The middle of the field is wide open with the safety playing off the line making this an easy pitch and catch for Brady and Edelman.

On the Patriots’ next possession, Brady hit Edelman again to keep the chains moving on the opening drive. This time, the Patriots establish another theme: pre-snap motion. To get him free releases, offensive coordinator Josh McDaniels sent Edelman in motion before the snap to avoid press coverage. The Patriots start in the same three-by-one set with Gronk flexed out, but motion Edelman into the slot next to him. Gronk releases vertically down the field to clear out the sideline, and Edelman runs a speed out to the sticks for an easy conversion.

Although the drive ended in a punt, Brady’s best play of the first half came on a third-down completion to James White. Right guard Shaq Mason gets beat by #97 Allan Bailey forcing Brady off of his spot, but the Pats quarterback steps up in the pocket finding a soft spot to deliver a perfectly placed back-shoulder throw to White who makes a terrific adjustment on the pass to move the chains. Brady’s ability to avoid pressure, find space to operate and make this throw under duress is GOAT stuff.

On the following drive, Brady hit White again for a third down conversion that wasn’t one of Brady’s best throws but highlights White’s ability to adjust once again and one of the Patriots’ favorite man beaters. On third and five, the Patriots run a pick play with wide receiver Phillip Dorsett and White. Dorsett legally sets a pick on Sorensen which gives White the space to get the first down. Brady throws behind White, but the Pats running back adjusts to the ball in the air and hauls in the pass.

Before we talk about Chris Hogan’s one-handed catch, notice the rotation of the Chiefs safeties after the snap. Kansas City rotates into a split-safety look opening the middle of the field once again. On top of that, they only rush three, which gives Brady plenty of time and allows left tackle Trent Brown to pancake pass rusher Chris Jones. From there, the Patriots ran one of their staple man beaters: high-low crossers with Hogan (intermediate) and Dorsett (deep). The Chiefs’ man coverage holds up, but with the linebackers occupied by James White, and the safeties deep, Brady has a wide open passing lane to Hogan. Brady puts the ball in front of Hogan where only he can make a play on it, and the Pats receiver makes a spectacular catch.

The Patriots put Gronk out wide nine times in Sunday’s win, tied for his second-most snaps at wide receiver this season. The goal was to force the Chiefs’ safeties into a decision; close the middle of the field or double Gronk. With the middle of the field closed, Brady finally took his shot to his tight end in crunch time. Gronk is one-on-one with Chiefs safety Eric Berry. He fights through a jam at the line of scrimmage, and stacks over the top of Berry late in the route. By stacking, Gronk can look back at Brady, locate the ball in the air and adjust accordingly unlike Berry whose back is to the quarterback. Brady lofts the ball over Berry’s coverage, and Gronk boxes out the safety at the catch point to set up the go-ahead touchdown.

On the Patriots’ first third-down and long conversion in overtime, the Pats got the benefit of some shoddy defense by the Chiefs. First, and at this point, it sounds like a broken record, the Chiefs play two-man coverage meaning there are two deep safeties, again leaving the middle of the field open. And second, the Patriots got Kansas City confused a few times by motioning Edelman into a stack with Dorsett before the snap and then snapping the ball before the Chiefs defense could communicate through their coverage. Here, both defensive backs cover Dorsett leaving Edelman wide open. Brady sees it and throws a quick dart to number 11. Also, notice the protection plan as both Gronk (left) and James White (right) chipped Chiefs pass rushers Dee Ford and Justin Houston before releasing into the route pattern. That was a regular occurrence to help out the tackles and buy Brady the extra time he needed.

The next third down play in overtime was similar to the first one. The Chiefs play two-man with the safeties deep, and the Patriots motion Edelman into the stack to Brady’s right this time. The Chiefs defensive backs stick to their man assignments, so the Patriots smartly utilize a “switch” release with Edelman going inside and Dorsett outside, which creates a natural pick on Edelman’s man making it easier for him to run away from Chiefs rookie Charvarius Ward. Ward recovers nicely after falling behind, but Brady unloads a missile with perfect placement to get the ball to Edelman. Can’t throw it any better than that.

Speaking of good throws, Brady threaded the needle to Gronkowski on his final third down conversion of the game setting up the game-winning touchdown. The Chiefs rotate Sorensen down this time to play the crossing or in-breaking routes on the trips side. As soon as Brady sees the safety rotation, he works the backside slant to Gronk. If the safety stays deep, Brady would’ve gone to Edelman over the middle. By taking those few steps down and to the inside, Brady rips this pass into a tight window to Gronk before Sorensen can get back to the slant.

As offensive coordinator Josh McDaniels said, the Patriots offense doesn’t want to be in third and long on a regular basis.

Plus, facing 19 third downs in the game makes you wonder what happened on first and second down?

Luckily for New England, they converted 13 of those 19 third downs, the most by a team in a game this season.

And the execution by Brady who was decisive, accurate and stepping into every throw instead of bailing as he has at times during the regular season should make everyone feel great.

As should the performances of Edelman, Gronkowski and the offensive line that nearly held the Chiefs pass rush without a quarterback hit or sack in the game.

The Patriots will have to stay out of third and long against Aaron Donald and company a week from Sunday, but their torrid pace on third down during the playoffs is impressive.