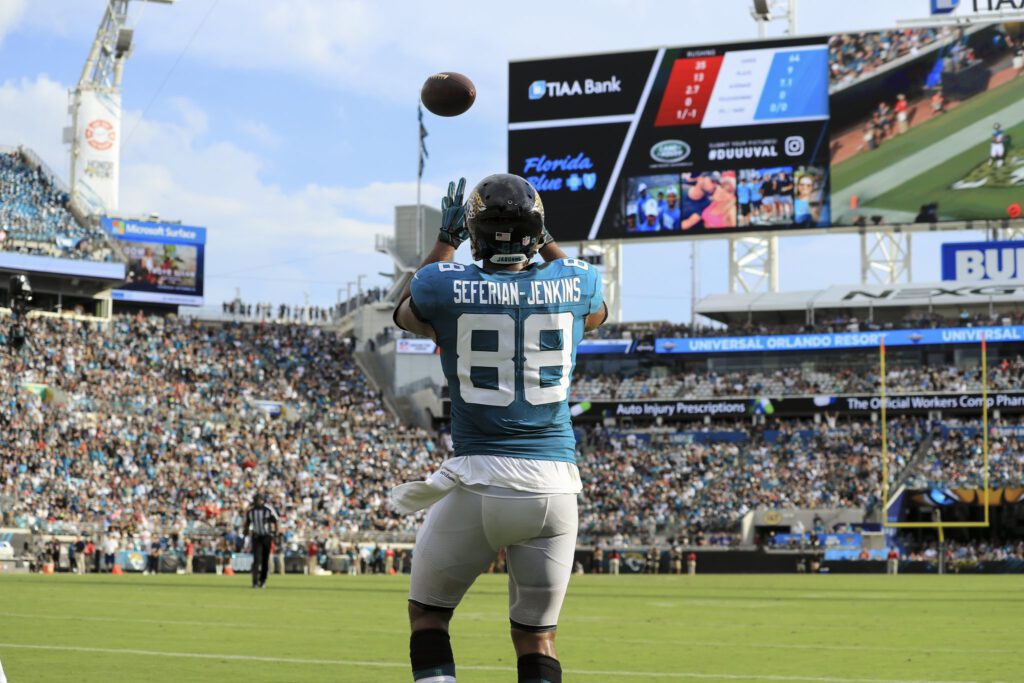 FOXBORO — The Patriots added to their tight end depth by signing the best remaining free agent at the position in Austin Seferian-Jenkins on Wednesday.

Seferian-Jenkins signed for the veterans’ minimum on a one-year deal, joining a group of underwhelming options that will fight for a roster spot as backups in training camp.

The Patriots still need a game changer at the position to fill Rob Gronkowski’s shoes, but Seferian-Jenkins offers some upside at a minimal cost as a player that was selected 38th overall in the draft by Tampa Bay in 2014.

Although there are flaws in these numbers, the following statistic does pass the eye test on film for Rob Gronkowski and Seferian-Jenkins over the last two seasons:

In that span, Seferian-Jenkins averaged three yards of separation on his pass routes, including plays he wasn’t targeted, according to Next Gen Stats.

Gronk averaged 2.9 yards of separation per route in his final two NFL seasons.

That’s not to say that Seferian-Jenkins is a better receiver than Gronk, we all know that isn’t true, but the future Hall of Famer wasn’t creating the same separation he once did earlier in his career.

The statistic also suggests that with better quarterback play, Seferian-Jenkins could see an uptick in production if he can stay on the field, a big “if” given his history.

Seferian-Jenkins’ primary quarterbacks in his career so far were Blake Bortles, Jameis Winston and Josh McCown; a far cry from Tom Brady.

The former second-round pick can create separation in the passing game, there’s proof of that in the numbers and tape, and now he’ll work with a quarterback that can get him the ball.

After reviewing Seferian-Jenkins’ targets over the last two seasons, his ability to find soft spots in zone coverage and work over the middle bode well for his fit in the Patriots offense.

On this play, the Jets ran a four verticals concept against the Buccaneers’ cover-3 zone. Seferian-Jenkins is in the inside slot to the quarterbacks right. The three vertical routes on the strong side of the formation threaten the deep zone players up the field, forcing them to stay back to protect against the deep ball. Seferian-Jenkins works the seam by wrapping his route around the linebacker once he clears the second level and puts his big body in between the safety and the incoming pass from McCown to box out the defender at the catch point.

We know Seferian-Jenkins can run through the middle of a zone now, and he’ll also sit down on short curls and spot routes in between the underneath linebackers.

Here, the defense is in a cover-2 shell, and Seferian-Jenkins is once again in the slot now to the quarterback’s left. The outside slot receiver to the trips side releases vertically down the field which forces the slot defender to widen. Seferian-Jenkins knows this, and runs right at the outside hip of the hook/curl defender and subtly works away from the linebacker at the top of his route to create a throwing window. Not a sexy route, but it gets the job done and keeps the chains moving.

Seferian-Jenkins effectively ran seams and curl routes against zone coverage as a member of the Jets and Jaguars over the last two seasons.

Against man coverage, Seferian-Jenkins doesn’t have elite speed to scare defensive backs, but he showed a general understanding of how to separate throughout the route both in his stems and route breaks.

Here are two examples of that in recent games against the Patriots:

First, Seferian-Jenkins beat Pats safety Patrick Chung on third down in Week 6 of 2017 as a member of the Jets.

Chung established inside leverage against the tight end with the Patriots in press-man coverage. Seferian-Jenkins read that leverage and attacks Chung with an inside stutter release to get the Pats safety to lean inside. Then, Seferian-Jenkins gets into Chung’s outside hip pocket to take advantage of Chung playing inside of him at the snap. He has already won the route at this point with body positioning, but he still works himself up the field to his landmark (eight yards past the line of scrimmage) and then cuts toward the sideline for the reception. The effort in his stem to take those few extra steps up the field makes it difficult for Chung to recover underneath the route.

In Week 2 of 2018, Seferian-Jenkins beat Devin McCourty across the middle of the field for an 11-yard gain on third and six.

With Seferian-Jenkins at inline tight end, he gets a free release with McCourty playing back. The new Pats tight end freezes McCourty with a rocker step (shoulder fake and jab step) at the top of the route and then shows excellent attention to detail to “step on the toes” out-muscling McCourty out of his break.

There are many reasons to think that Seferian-Jenkins will ultimately fail in New England.

Last season, he was off to a good start with Jacksonville but landed on injured reserve after five games, and the Jaguars decided not to pick up his option for the 2019 season.

The new Patriots tight end has never played the full 16 games and served a two-game suspension in 2017 for violating the NFL’s substance abuse policy.

His best season as a pro came with the Jets two years ago when he posted an underwhelming stat-line of 50 receptions, 357 yards and three touchdowns.

Those numbers and playing time history suggest that this could flame out quickly and the tight end position remains a top priority for New England in the draft.

But the potential is there for Seferian-Jenkins to carve out a role in the Patriots’ offense.