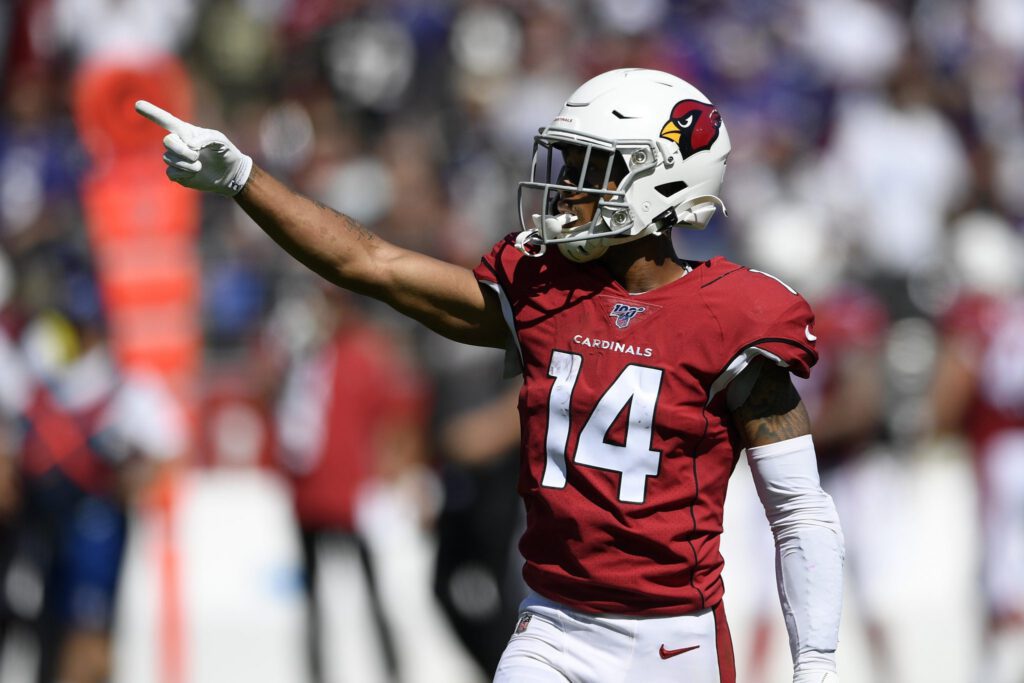 In a typical offseason, the Patriots signing former Cardinals wide receiver Damiere Byrd would be labeled a classic Belichick move.

Patriots fans are understandably crushed by the departure of Tom Brady, and nobody wants to hear that a receiver with 44 career catches in four seasons is a fantastic signing.

But Byrd had flashes down the stretch last season when his playing time increased, finishing the year with two games of 70-plus receiving yards in his final three contests.

Cardinals quarterback Kyler Murray completed over 71 percent of his passes to Byrd in 2019 with a 121.1 passer rating on throws to the new Patriots receiver in the final four games.

The first aspect of Byrd’s game that stands out is his speed, which is no surprise due to his track background and blazing 4.28-second 40-yard dash at his 2015 Pro Day.

Although he can fly, he’s got a smooth release package and is sudden in his short-area movements, with the understanding of how to sequence and set up moves to create separation at the line of scrimmage.

As a burner on the outside, Byrd adheres to the old route-running principle of making every release look like a fade route as a way to set up different breaks against press coverage.

Here, Cards coach Kliff Kingsbury puts four receivers on the right side, creating a one-on-one matchup for Byrd at the bottom of the screen. Byrd’s first step is with his outside leg up the field, gaining ground on the corner to get up on his toes. He sells the fade with his footwork and eyes, flashing his head to the sideline, mimicking a fade pattern. After he gets the corner to commit to the outside release, he easily transitions into a slant and creates an easy throw.

The following week, Byrd knows the Rams defensive backs saw on tape that he likes to run slants, so he works backward, using the same release to set up a go ball. His first step once again is upfield with his outside foot, and then he flashes his eyes inside, getting the corner to peek back at the quarterback to see if the ball is coming his direction. Byrd stutters out of the slant and accelerates into the fade, and the poor eye discipline by the defender causes him to open his hips too late. Byrd gets over the top and holds the line, protecting the catch point down the field.

Later in the game, Byrd goes back to the slant on the goal line with the same footwork. He also does well to use his hands as weapons, swatting the jam out of the way to keep his body clean and run through contact for a touchdown.

In the games I watched, Byrd had some decent reps against off-coverage as well, with decent stems to set up his routes and smooth transitions in his breaks.

On this play, Byrd beats Browns corner Greedy Williams clean on a blaze out. At the top of the route, he sells a post pattern in his hips and eyes, opening his hips into the post and snapping his head inside to carry out the fake. Once Williams commits, Byrd sinks and transitions into an out, curling back to the quarterback to secure a completion.

These probably look like simple routes that a pro receiver should execute, and that’s true to an extent. Still, Byrd’s nuanced releases open up space for him to use his explosiveness.

Byrd also got a few touches on receiver screens and adds value as a returner on both kickoffs and punts.

On 14 career kickoff returns, Byrd is averaging over 25 yards per attempt, and his average rose to 32.7 on seven kickoff returns for the Panthers in 2017.

The new Pats wideout didn’t have any rush attempts a year ago, but his natural skill as a ball carrier suggests he could also be useful on jet sweeps and end-arounds.

Byrd slides into the Phillip Dorsett role nicely and is cheaper. Again, classic Belichick. Plus, the added value in the kicking game gives him a better chance to make the roster.

Nobody is trying to sell you on Byrd being a game-changer, and he won’t make anyone feel better about losing Brady, but the potential for a productive role player is there.